What, exactly, do we want from astronauts? Heroism? Inspiration? Cosmic visions? (Did you see God up there?) Do we prefer them to be icons or ordinary folks—the better to imagine ourselves exploring the heavens alongside them?

More than half a century into the space age, the answer is All of the Above. But some of the luster has faded from a business that once seemed impossibly daring and futuristic. Today, with more than 500 people having traveled into space and NASA’s goals a little less clear than they used to be, astronauts rarely capture the public’s attention except when they happen to stray into pop culture.

Meanwhile, NASA’s corps of space flyers remains a small, close-knit culture (there are currently 44 active astronauts) who routinely perform a difficult and dangerous job with great skill and dedication, but almost entirely out of the public eye. We see their tweets and Instagram photos, and that’s about it. What else is there to say?

Enough, as it turns out, to produce a bumper crop of new astronaut memoirs, which, taken together, help to fill out the cultural history of the past two decades of space exploration. Most of the Apollo moon explorers wrote books, but we’ve heard less from space shuttle astronauts (a much larger group), and almost nothing from the more than 100 men and women who’ve lived on the space station since 2000. With these recent accounts, the balance starts to shift. 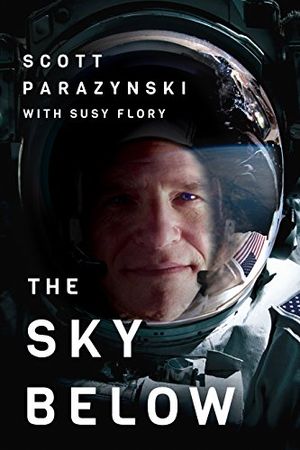 The Sky Below: A True Story of Summits, Space, and Speed

Scott Parazynski was, during his 17 years at NASA, the quintessential shuttle astronaut. Like many other space flyers of that generation, he didn’t come from a military background. He was a physician, an athlete (good enough at the luge to try out for the Olympics), and by his own account, a risk-taker with an “insatiable need for speed” and adventure.

Parazynski begins his book not in space but on Mt. Everest, which he summited in 2009 on his second try. His mountain climbing adventures help to distinguish The Sky Below from other astronaut autobiographies, but therein lies a problem: Although Shuttle missions were not all the same, they could easily seem that way to outsiders, and by the time Parazynski gets to recounting his fifth flight, they start to blend together. He dutifully ticks off the highlights of a modern astronaut’s career: the life-changing call from NASA to tell him he’s got the job, the anxious waiting for a flight assignment, the first launch. There are few surprises and little reflection, either on the wonders of space travel or on his crewmates. He’s mindful of the astronauts’ public image (“We all work to uphold the values of the office”), so don’t expect him to tell tales out of school. As a result, he comes off as a straight-ahead and uncomplicated astro-jock, at least in this telling. 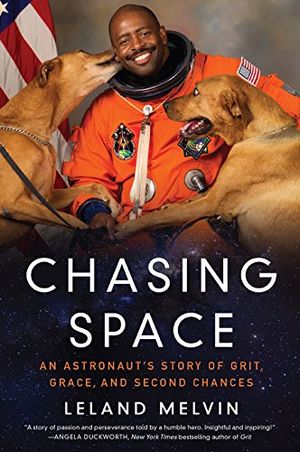 Leland Melvin’s path to becoming an astronaut was less typical. A self-described “black nerdy kid who liked athletics,” he grew up wanting to be Arthur Ashe, not Neil Armstrong. He became a college football star, and even made the pros as an 11th-round pick, until a hamstring injury less than two weeks into training camp ended his career before he suited up for a single NFL game.

Overcoming adversity is a recurring theme in Chasing Space, and we follow Melvin’s subsequent journey through grad school, his recruitment by NASA (which at the time was looking for more diversity in its workforce) and his two shuttle flights in 2008 and 2009. Becoming an astronaut had never crossed his mind, since nobody at the space agency “looked like me” when he was growing up. Race never holds Melvin back, but it’s sometimes a factor. Even after he joins one of the world’s most elite professions, he’s snubbed by a white neighbor when he moves into the same Houston suburb where Neil Armstrong and Buzz Aldrin once lived. Assigned to Russia as part of NASA’s training support team, he’s chased by a gang of skinheads through the Moscow streets.

Still, like most astronauts, Melvin is supremely confident and goal-oriented. What makes for success, he wonders? Is it a good upbringing, hard work, positive thinking? He recommends all three. But this kind of advice—Melvin is not the first astronaut to offer life lessons based on his NASA experience—is rarely as helpful as authors intend. More than 99.9 percent of NASA’s last round of astronaut applicants didn’t make the cut, even though many of them surely were go-getters, too. Apparently a stellar résumé and perseverance aren’t enough to guarantee a trip to space. 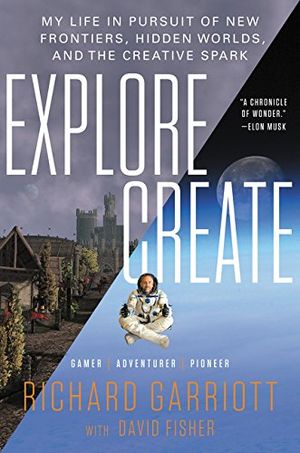 Explore/Create: My Life in Pursuit of New Frontiers, Hidden Worlds, and the Creative Spark

Richard Garriott found a different way to get there: He became a millionaire first. For him, the idea of space travel had never been a distant dream—his father Owen flew on Skylab and the shuttle, and Richard grew up around astronauts in the suburbs of Houston. His passions, though, went to computer programming and gaming, not aerospace. He spent his teens playing Dungeons & Dragons and spinning fantasy stories, talents he used to create the Ultima series, one of the earliest role-playing computer games, which made him a fortune while he was still in his twenties.

Not that he stayed locked in a dark basement. To establish his “exploration street cred” with readers, Garriott starts off his memoir in an ocean submersible, trapped (for many anxious minutes) beneath the wreckage of the Titanic. His “almost desperate need for adventure” has taken him from Antarctica to the Amazon, and finally, in 2008, to space, after paying the Russian space agency to spend 10 days onboard the International Space Station as a private citizen.

Garriott’s astronaut father was so buttoned-down that he never talked about his own space travels (the family called him “Spock”), but Richard loves telling stories, and turns out to be pretty good at it, whether he’s describing the silence of Antarctica—a quiet so profound he could hear tent flaps rubbing against each other from 30 yards away—or how it feels, physically and emotionally, to get hit in the boxing ring. His talent for storytelling—and his outsider status—make Garriott an ideal person to tell us what it’s really like in space, which is, after all, what we want most from astronaut memoirs.

Describing the Russian section of the space station, he writes:

This is where people brush their teeth and damp-towel their hair, so water has sprayed on the wall and over time become moldy; it’s dingy and creepy and has the feeling of being in a haunted house. It’s like being Cinderella in space, floating from the grand ballroom back into the hut in the forest.

He dishes about the supposedly forbidden items space crews have smuggled into orbit (alcohol, a kielbasa), and reveals a little-known launch-day ritual: a Russian general kicked him in the butt as he walked up the Soyuz rocket gantry. He also answers, in illuminating detail, that perennial question “How do you go to the bathroom in space?” (His analogy: squeezing a tube of toothpaste). 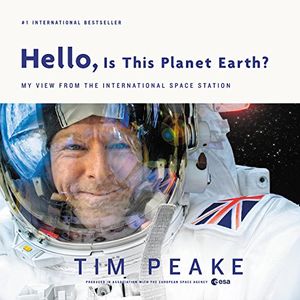 Hello, Is This Planet Earth?: My View from the International Space Station 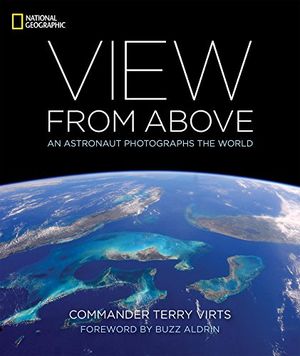 View From Above: An Astronaut Photographs the World

Of course, to really show us what it’s like, pictures are indispensable, and many astronauts have opted for coffee-table books instead of narratives to tell their stories. In recent years NASA’s social media machine has taken to posting the best photos online, where astronauts typically have tens of thousands of followers. But there’s still room for the occasional, old-fashioned picture book.

British astronaut Tim Peake combined the two formats by re-publishing his tweets, some verbatim, alongside photos he and his crewmates took during his six-month stay on the space station in 2016. Hello, Is This Planet Earth?—produced “in association” with the European Space Agency, according to the cover—seems a bit dashed off as a result.

Far more satisfying is Terry Virts’ View From Above, which supplements magnificent images of Earth with stories drawn from the astronaut’s 213 days in space. He found photography to be a source of great pleasure in orbit, and it shows. Virts took a NASA record 319,275 photos during his six and a half months on the station, many looking down at Earth from the windowed cupola that his STS-130 shuttle crew attached to the station in 2010. He remembers specific places by their colors. The turquoise Bahamas are his favorite, but he likes the orange-black Algerian desert, too. Seeing the border between North Korea and South Korea at night, he’s struck by the absence of light in the north, a stark visual reminder of Earthly politics.

His anecdotes range from suspenseful—a false alarm about a potentially deadly ammonia gas leak has the space station crew briefly contemplating an emergency landing in Siberia—to charming (a room full of Japanese mission controllers singing “Jingle Bells” in Japanese to the crew). Virts’ account sparkles with life, even when the station itself often seems sterile and mechanical. Floating through the modules one day, he hears birds chirping, and finds cosmonaut Misha Kornienko listening to recordings of bird sounds sent up by Russian psychologists. Virts likes it so much he asks for his own Earth sounds, and plays them over all the station’s laptops, so “wherever I floated, it sounded like rain on the rooftop.” Moments like these separate View From Above from other coffee table space books that serve up lots of pretty Earth views, but leave out the humanity. 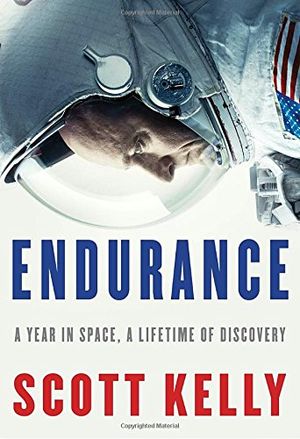 Endurance: A Year in Space, A Lifetime of Discovery

Scott Kelly’s willingness to push past the upbeat stereotype of The Astronaut and present a more nuanced view of spaceflight is what sets Endurance apart from other recent space memoirs. His year-long stay on the station beginning in March 2015 earned him a measure of pop fame, and rightfully so. Endurance is a thoughtful, honest, adult’s-eye-view of spaceflight in the 21st century, and Kelly comes off more like The Martian’s Mark Watney than like a gung-ho John Glenn.

He strays from the standard script early on by admitting that he was a terrible student, and wasn’t particularly religious. Kelly’s tone is candid but not confessional, whether he’s telling us about his divorce, his parents’ drunken fights, or his rocky relationship with his daughter. The honesty is important, because it predisposes us to believe his account of what it’s like to live inside a cluster of metal cylinders, away from loved ones and all Earthly delights, with danger lurking constantly outside, for almost a year.

Space, he says, has “a lot of contradictions.” Along with the beauty and exhilaration comes frustration and inconvenience. The Soyuz spacecraft’s communication system is “horrible,” he hates the blue “Captain America” flight suit that crushes his testicles when his body stretches out in space, and NASA packs too many vanilla and butterscotch puddings, and not enough chocolate. (He also discovers “that with the mice on board, it’s not wise to eat what appear to be floating pieces of chocolate.”) The system that removes carbon dioxide from the station air is prone to breakdowns, and the resulting buildup of CO2 causes headaches and fuzzy thinking, what Kelly calls “space brain.”

Not that he’s a complainer. Far from it. Challenging days are the best, even though much of the work is prosaic, fix-it stuff, no more exciting than repairing a garbage disposal. When Kelly’s feeling sorry for himself, he reads about Shackleton exploring Antarctica. Those 20th century explorers could never be sure they’d make it out alive. Astronauts fully expect to, which is a critical difference.

As for where we should head next in space, Kelly is all for sending an expedition to Mars. If we do, let’s hope there’s an astronaut like him along, someone who’s willing to report honestly on the full experience, the good, the bad, the beautiful and the boring. Otherwise, we might as well just send robots.