Rowland White has written four books about aerospace history. His latest is Into the Black: The Extraordinary Untold Story of the First Flight of the Space Shuttle Columbia and the Men Who Flew Her. White’s book provides a detailed account of STS-1, the first space shuttle mission to reach orbit. From the moment the mission began, however, things went wrong, and White chronicles the many anxious moments that followed until images secretly taken by reconnaissance satellites proved that Columbia and her two-man crew could land safely. White spoke with senior associate editor Diane Tedeschi in January.

Rowland White: It was just a fantastic flying story—the last great adventure of NASA’s Apollo generation—that I felt hadn’t properly been brought to life before. But as it took shape, something more emerged: an incredible race-against-time drama between NASA and the Department of Defense.

Out of the many qualified candidates in NASA’s astronaut corps, why do you think John Young and Bob Crippen were chosen for STS-1?

Moonwalker John Young was NASA’s most storied space traveler: the head of the astronaut office with a long record of space firsts to his name, including the first manned Gemini flight alongside Gus Grissom. Young was the obvious choice as commander. And no one knew more about the shuttle’s complex systems and avionics than Bob Crippen. With such complimentary skills and experience, together Young and Crippen were the perfect crew.

What caused Columbia to lose 16 of its thermal tiles during the launch of STS-1?

Amazingly, it was sound—albeit sound at a volume that would have been capable of killing anyone standing within 800 feet of it. For all the testing, modeling, and simulation prior to the first flight, much remained unknown. And when the shuttle’s solid rocket boosters fired, a sonic shock wave rebounded off the pad and struck Columbia with a force 10 times greater than what had been expected based on 1/15-scale tests. Was there any consideration before the flight of supplying Crippen and Young with a tile repair kit?

Plenty. A year before the first flight, NASA contracted with Martin Marietta to develop an on-orbit tile-repair kit, and even announced that Columbia would be carrying it during the first flight. It consisted of a jet pack, a work-station-like window cleaner’s cradle, and a caulking gun. Crippen spent time in a zero-G simulator and on board NASA’s [reduced-gravity aircraft] training to use it. It was so unwieldy that he quickly became convinced that any effort to use it would likely only make things worse and so the decision was taken to leave it behind.

How essential was Gene Kranz in determining that Columbia’s crew would not be in danger during reentry? Was Kranz’ experience with crisis important in analyzing the situation with Columbia?

What’s interesting is the way Kranz—as he was during the Apollo 13 emergency—once again became a kind of lightning rod for everyone’s concerns. More than anyone else, he was the public face of NASA during the STS-1 press conferences, but as reassuring a presence as he was, his freedom for maneuver was limited.  Despite persistent questioning from reporters, he wasn’t able to share the classified details of what DoD was doing in support of Columbia’s mission.

Was there a harmonious working relationship between NASA and the National Reconnaissance Office in getting the KH-11 images of Columbia?

Where it mattered, certainly, but it might be more accurate to talk about the relationship between NASA and the Air Force. Remember that in 1981, the very existence of the NRO [National Reconnaissance Office] was still classified. A key figure in all of this was Hans Mark. A keen supporter of the space shuttle, he’d been director of NASA’s Ames Research Center when the shuttle program was first announced before becoming director of the NRO in 1977. He was one of just a handful people in mission control during STS-1 who understood the capabilities of the NRO’s KH-11 satellites.

Do you get the impression that Young and Crippen’s enjoyment of the mission was overshadowed by the loss of the tiles and the initial uncertainty about Columbia’s structural soundness? To some extent, did the crew’s frequent adjustments to Columbia’s flight path (to synchronize with orbits of the reconnaissance satellites) infringe on their other mission activities?

On occasions you can actually hear the stress in their voices as they struggle to make the changes to the flight plan. Or when mistakes were made.  The path of a spacecraft on orbit is relentless.  You can’t slow down. You can’t buy time. If Young and Crippen—and indeed mission control—failed to ensure that Columbia was facing in exactly the right direction, at exactly the right time, then any chance for the Air Force controllers to capture the photographs they needed would be gone for good. And with them any possibility of properly assessing the risk to the shuttle.

Was there anything that should have been learned from STS-1 that might have prevented the loss of Columbia in 2003?

Yes, sadly, and it’s simply that when there was any doubt at all about the condition of the orbiter, NASA should have asked DoD for help. As we know from the Columbia Accident Investigation Board report, the agency nearly did. But a request made for DoD imagery of Columbia was rescinded by Linda Ham, the chair of the Mission Management Team, after formal procedures were allowed to smother concerns from engineers at the launch site.

The space shuttle was the most remarkable flying machine ever built. And yet too often the shuttle story has been characterized either by a sort of unimpressed familiarity or by tragedy. I hope that, through bringing to life the drama and excitement of Columbia’s first flight, Into the Black helps redress the balance a bit, and helps ensure that the courageous and capable astronauts that flew the shuttle during those audacious early test flights take their rightful place alongside the pioneers of the Mercury, Gemini, and Apollo programs in the public’s imagination. 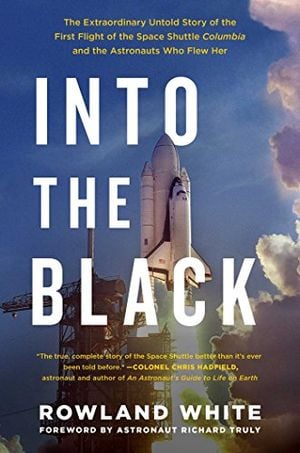