Remember the final scene in Thunderball? After foiling a nuclear attack, 007 (Sean Connery) and femme fatale Domino (Claudine Auger) are hauled on board a passing B-17 by the Fulton Skyhook system. The aerial retrieval system consisted of a package that could be dropped to a person on the ground, who would don a harness attached to a 500-foot line. A balloon, inflated with a portable helium bottle, raised the line to its full height.

On the flight deck of the USS Valley Forge, January 30, 1960. The Skyhook retrieved artifacts and cargo in addition to people. Photograph: NASM. 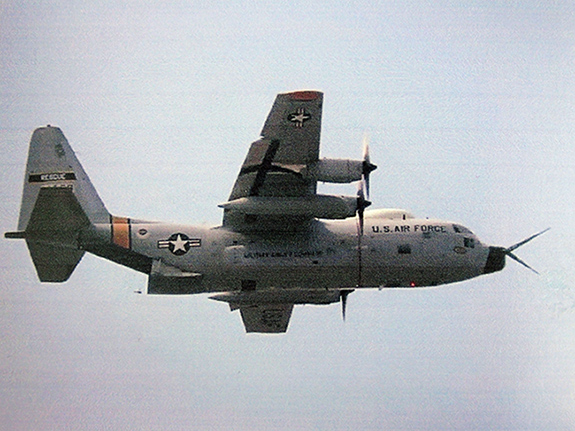 A pickup aircraft (note the “horns” on the nose) would then fly directly at the line, aiming at a marker placed at an altitude of 425 feet. As the line was caught on the forks, the balloon would release, and a spring-loaded mechanism would secure the line to the aircraft. The person was then winched up the line.

The first live test of Robert Fulton’s system was done with a pig, notes the CIA’s page on Fulton and Operation Coldfeet. “Lifted off the ground, the pig began to spin as it flew through the air at 125 mph. It arrived on board undamaged but in a disoriented state. Once it recovered, it attacked the crew.” (We aren’t surprised, are we?) The National Air and Space Museum is in the process of conserving its Fulton Skyhook suit, which was donated to the Museum in 1972 by the U.S. Air Force. “Skyhook was meant to be universal,” says Steven Pickman, a conservator in the Museum’s Conservation Laboratory. “It fit any size adult, and was suitable for any environment.” When they first inspected the suit, the conservation team was alarmed by a white material on its surface. The haze wasn’t mold or salt efflorescence, and, in fact, wasn’t harmful at all, so the team just added storage supports and left the suit alone. Fulton manual, Lockheed Aircraft Corporation. "After the pickup is made, the pilot allows approximately 15 seconds for the load to stabilize, then pulls the nose of the airplane up." Illustration: slugsite.com.

The Fulton manual notes that “The effect of the induced acceleration forces on the human body due to the aerial pickup by this system has been carefully evaluated. The recorded accelerations, from numerous tests, have ranged from 4.5 Gs to 10.2 Gs with a mean value of 5.5 Gs.” While the system was capable—in theory—of rescuing three 200-pound men at one time, the manual points out that “Since the feasibility of multiple pickups has only been proven with animals at this time, it is judged that multiple pickups of human beings will not normally be used until thoroughly tested.”