In Memoirs of a Cold War Fighter Pilot, Steve Ladd, a retired U.S. Air Force colonel, writes about his experience flying two stone-cold classics: the F-4 Phantom and the A-10 Warthog. In the F-4, Ladd completed 204 combat missions during the Vietnam War, after which he moved on to assignments in Europe and the Middle East. His book is also an account of how fighter pilots lived and played when they weren’t in the air. He spoke with Air & Space associate editor Diane Tedeschi in February.

Ladd: I had 28 years’ worth of stories to tell, and my challenge has been to incorporate them in a work that met two specific standards: Not so simplistic that my brothers in “The Job” will heap scorn upon the book yet not so complex and parochial that the other 99 percent of the population will cast it aside in confusion—frustrated by a sea of acronyms and inward-looking concepts.

Are you thankful that your career occurred when flying aircraft was still an exercise of stick-and-rudder skills?

As much as I respect the quantum leaps in avionics and weapons-delivery technology over the years, for me as a pilot, there’s nothing to compare with throttles in the left hand, stick in the right, and feet on the rudder pedals. Controlling the aircraft without reliance on electrons and algorithms is the ultimate buzz for a guy with wings on his chest.

Why do you think the F-4 has such enduring appeal?

Because the airplane is, very simply, iconic. No other fighter—before the F-4 or since—has approached the versatility and resilience of the Phantom. It did virtually everything well—conventional and nuclear weapons delivery, air superiority, interdiction, close air support, reconnaissance—and none of these roles were secondary. For four decades, it remained at the very top of the fighter totem pole.

Did flying the F-4 live up to your expectations?

It totally surpassed them. I was a 23-year-old second lieutenant in pilot training when a combat crew brought a Phantom to Moody Air Force Base for show and tell. I took one look and decided that’s what I wanted to fly. When it finally came to pass, the F-4 dazzled me every time I took it up, in one way or another. The Phantom was not an easy ride—it had idiosyncrasies that made it a challenge. For example, most models were prone to a situation called “adverse yaw.” As simply as I can explain this, slamming the stick left or right during hard maneuvering resulted, not in the expected hard turn, but instead a snap roll in the opposite direction. Not a welcome surprise. Unlike in other aircraft under these circumstances, we learned to always stomp on the rudder pedals to turn. Tantrums like this aside, the Phantom (or Rhino, or Double Ugly—pick your nickname) was power, blinding speed, and breathtaking warfighting capabilities.

Is it true that your first impression of the A-10 was that it was “butt ugly”?

When I first laid eyes on the A-10, I thought: What the hell is this? To this day, I still can’t think of a better description than “butt ugly.” But that reveals the narcissistic nature of the fighter pilot. I suspect I was more concerned with my own image climbing out of this monstrosity than the appearance of the machine itself. The A-10 was a delight to fly—responsive and highly maneuverable with superb cockpit visibility and a devastating weapons load. The close air support mission, to me, is the most challenging of all. There is no greater reward than knowing you’ve saved teammates on the ground from being decimated or overrun by an enemy.

Is there anything that distinguishes Hog drivers from other Air Force pilots?

First is the aircraft itself—the Hog bears no resemblance to any other aircraft in the inventory. At first, Hog pilots were often the butt of jokes, drivers of the ugly airplane, but this was short lived as the airplane gained prominence. Today that attitude, like the wooly mammoth, is pretty much extinct.

The second factor that differentiates the A-10 pilot from his or her contemporaries is the mission. Despite the Air Force’s best efforts to inject other aircraft into this role—F-16s, F-15Es, F-35s, even B-1s!—the A-10 still reigns supreme above the battlefield. Hog drivers are proud of this preeminence, and they enthusiastically assume the mantle.

What is the cockiest thing you ever did in an aircraft?

This is a tough one. Not because of any trepidation—I think the statute of limitations ran out a long time ago. The fact that we fighter pilots are all as mad as a box of frogs is tempered by an even more powerful constraint: rock-solid discipline. Yes, on many occasions I flew too low, too fast, too slow, too close, but these aberrations were dictated more by operational or tactical necessity than willful intent.

One instance that stands out occurred on my last flight in an A-10. I had led a four-ship of Hogs to a tactical gunnery range in the Nevada desert where we unleashed about everything the Hog will carry against targets. We came home, as befitting a flight of Warthogs, at 100 feet above the ground in a tactical formation. About halfway home, a little devil popped up in my head. “You’ve never done it—do it!” he demanded. I caved immediately. I directed my flight to continue straight ahead, pulled the nose up sharply, and performed a slow smooth victory roll over a few Nevada trailer dwellers below. It wasn’t as graceful as a Spitfire or Mustang in the movies, but by God it was exhilarating.

What are your impressions of the people you flew with?

I’ve had the opportunity to lead (and follow) some of the most impressive human beings on the planet. You won’t recognize their names—they never achieved fame or fortune. But they believed in their profession and wrung every ounce of performance out of the aircraft they flew and the life they led. On the ground, they were flamboyant, irreverent, and opinionated while somehow remaining articulate and congenial. They were always my brothers. 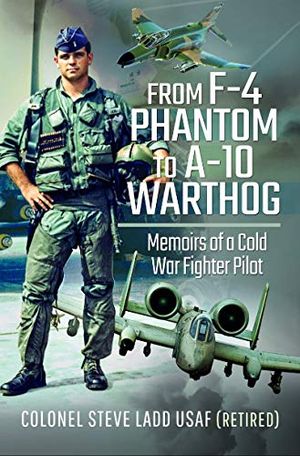 From F-4 Phantom to A-10 Warthog: Memoirs of a Cold War Fighter Pilot