On the morning of January 28, 1986, NASA launched the space shuttle Challenger from the Kennedy Space Center in Florida. The crew included the first Jewish astronaut, the second Black astronaut, and NASA’s first Teacher in Space, Christa McAuliffe. In his latest book, The Burning Blue, Kevin Cook documents the crew’s many achievements—and the flawed decision-making that led to their deaths. Cook spoke with Air & Space senior associate editor Diane Tedeschi in April.

Cook: Like many Americans, I remember where I was standing when first I saw the Challenger accident on TV. The replays ran over and over. That made it a peculiarly modern event, it seems to me—a televised disaster seen and re-seen by millions of people on screens all over the country. Today we’re inundated with video clips that make news and demand our attention, but the phenomenon was still new in 1986.

Thirty years after the disaster—with a new era of space exploration beginning—I realized that I knew a little about Christa McAuliffe but couldn’t name any of the other six crew members. A little research showed what a remarkable, diverse crew Commander Dick Scobee led. I wanted to tell their stories as well as hers. And I hoped to remind people that there’s much more to the story than most of us suspected at the time.

How did the Teacher in Space program come about?

It was a publicity stunt. When the program was launched with much fanfare in 1984, President Ronald Reagan was running for reelection. The Reagan Administration had slashed education budgets, which led the National Education Association, which represented millions of teachers, to call the president “Scrooge” and endorse his opponent, Walter Mondale. Reagan hoped to gain teachers’ support by choosing one of them to be the first “ordinary citizen” to fly into space. By then, shuttle flights were seen as routine. NASA hoped the Teacher in Space would be the first of many civilians who would help draw attention to the space program. There was a Journalist in Space program teed up and ready to go, with applicants including Walter Cronkite, Norman Mailer, and Geraldo Rivera. That program was quietly scrapped after the Challenger accident.

It’s worth noting that Christa McAuliffe understood her role. She fulfilled all her PR duties, but she was nobody’s pawn. She took advantage of what she called “the opportunity of a lifetime” to promote her cause: America’s overworked, underpaid schoolteachers.

How did the rest of the Challenger crew really feel about the Teacher in Space program? Was it something they did their best to put up with?

That’s a good way to put it. They all knew plenty of worthy candidates—friends and colleagues of theirs—who had been waiting for years to fly. Suddenly a high-school social studies teacher takes one of the seven precious seats on a shuttle mission. Scobee had his doubts about NASA’s so-called Space Flight Participant Program. At the same time, he appreciated the attention McAuliffe was bringing to the shuttle program. “Thanks to you, we’re on TV again,” he told her.

What did the crew think about McAuliffe?

She won them over. At first one of the veteran astronauts in the crew, mission specialist Judith Resnik—a brilliant scientist who loathed the press—saw the Space Flight Participant Program as a sellout on NASA’s part. “What are we going to do with these people?” she asked. Then she saw how hard Christa was working to get through her astronaut training while handling a torrent of media requests that turned the Teacher in Space into a national celebrity. Like almost everyone who knew Christa McAuliffe, Resnik came to like and admire her. She became Christa’s unofficial tutor, helping her master the science she needed to get through her training. 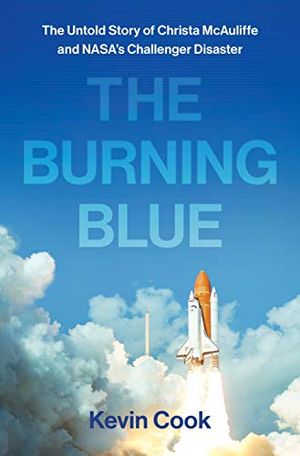 The Burning Blue: The Untold Story of Christa McAuliffe and NASA's Challenger Disaster

Did the Challenger disaster have the effect of actually renewing interest in the space shuttle program?

Not in the way NASA hoped. The Teacher in Space program brought an enormous amount of attention to Christa and Challenger, but then the awful spectacle of the shuttle stack exploding and breaking up over Cape Canaveral threatened to end the shuttle program. Dozens of missions were cancelled. There wouldn’t be another shuttle flight for more than two and a half years. Some observers have called the Challenger disaster the end of America’s romance with space, but I think they are wrong. NASA’s recent Mars mission, plans for new moon landings, and corporate efforts like Blue Origin and SpaceX show that we’re still drawn to space exploration. Like most of the people I met while working on The Burning Blue, I grew up with the space program and dreamed of being an astronaut. I’m excited about the projects we’ll see in the next 10 to 20 years.

What evidence is there that the Challenger crew was alive and conscious in the nearly three minutes it took the orbiter to fall back to Earth?

Most people still believe that the crew died when the stack broke apart, leaving that awful pitchfork of rocket-booster exhaust in the sky. In fact, all seven were alive and aware for at least part of the two minutes and forty-five seconds it took the crew compartment to rise to its apogee at 65,000 feet and fall into the Atlantic at more than 200 miles per hour, killing the crew on impact with the water.

During those minutes, they tried to stay alive. At least three of the crew’s seven PEAPs—the personal egress air packs that provided five to six minutes of breathable air—were activated after the stack broke up. NASA’s forensics showed that switches on the flight deck were thrown after the explosion in an attempt to save the craft and crew. The Challenger astronauts may have been doomed at that point, but I think they were heroic.

Had the O-rings been problematic before the Challenger tragedy? Had other shuttle missions also been unknowingly at risk?

Yes and yes. Morton Thiokol, the contractor that made the shuttle’s rocket boosters, had a task force studying the O-ring problem, but didn’t want to delay any launches. Without ironclad proof that the O-rings would fail, the pressure to keep shuttles flying was too much to resist. As Richard Feynman—the Nobel-winning physicist who served on the presidential commission investigating the disaster—saw it, the shuttle program was “playing Russian roulette.”

What can we learn from Challenger?

One of the many interesting people I met while working on the book was NASA’s Mike Ciannilli, who runs the agency’s new “Apollo Challenger Columbia Lessons Learned Program.” In lectures and Zoom talks, he reminds space-industry executives and workers of the mistakes that led to the space program’s worst disasters, in hopes of preventing the next one. “The problem with Challenger wasn’t the machine,” Ciannilli told me. “The machine was trying to talk to us, but we didn’t listen.”