Stephen L. Petranek, a former editor-in-chief of Discover and This Old House, is the author of the just-published How We’ll Live on Mars, which explains why the human race should be planning its escape to the Red Planet and what to expect once we get there. Petranek spoke with Associate Editor Diane Tedeschi in July.

Petranek: I could see that the most extraordinary and most disruptive event in human history—the colonization of Mars—was about to occur far sooner than anyone could guess. I felt a journalistic urgency to start the discussion of what that will mean—as soon as possible.

Do you think a televised Mars landing would be as watched as the Apollo 11 moon landing in July 1969?

It would likely be the largest TV audience in the history of broadcasting and far greater than the moon landing, if only because access to TVs is so much greater now. Imagine the sense of pride in everyone on the home planet when they realize that humans can actually do this—settle on another planet in our solar system.

Are there any physical human traits that would be favorable to living on Mars?

Humans seem remarkably adaptable to cold climates, which will be useful on Mars, and we now know that some humans can withstand radiation exposure, both solar and cosmic rays, far better than others. Radiation exposure is the most difficult problem we face on Mars. Anyone choosing to go there will also choose a shorter lifespan due to radiation.

Once a successful Mars colony is established, how quickly would adaptive Martian characteristics emerge in the descendants of the first settlers?

I don’t think we’ll wait around for accidental mutations in our genes to find out. I think we’ll begin editing the genes of our Martian offspring long before we naturally evolve to live on the Red Planet. The greatest adaptation we might avail ourselves of after [tolerance of] radiation would be to breathe higher concentrations of CO2.

How can we ensure that Mars won’t undergo the same ecological assaults that Earth is enduring?

There are no laws on Mars, and we’ll initially be operating under the 1967 Outer Space Treaty that prevents any country from owning other celestial bodies. That treaty declares that a country is responsible for any damages it causes on another planet or moon. So many astronauts have reported a deep and transformative concern for Earth after they have witnessed it from far away that I hope Mars settlers will experience a similar reverence and take their responsibility earnestly. The big question is whether we can terraform the planet to make it better rather than worse. The opportunity for mistakes we cannot reverse is enormous. That’s why we should be discussing Mars colonization now—not in a decade when it has already begun to happen.

What role, if any, will NASA have in establishing a Mars colony? What role should NASA have?

NASA is building a huge rocket, the SLS, and the Orion manned capsule, which officials now say will be used to explore Mars in the 2030s. A year ago they barely paid any lip service to going to Mars with the Orion/SLS. But SpaceX is making a trip there far more real, so NASA has developed a sudden interest. I suspect NASA will be so late to the party that they will never send the Orion/SLS system to Mars. For one thing, it would be far cheaper to send NASA astronauts on a SpaceX flight.

NASA is amazingly good at robotics and probes and investigative science. SpaceX could not land on Mars in 2027 without the information that rovers and orbiters have revealed or without devices like the MOXIE oxygen system that NASA has developed. The real truth is that NASA isn’t great at rocketry and doing things faster, better, and cheaper. SpaceX is good at those things. The usefulness of the pairing is obvious. It’s tragic that NASA can’t just say: “Okay, instead of investing billions in Orion and the SLS rocket, let’s give that money to SpaceX and work on administering and strategizing the Mars mission with them.” A government agency is constantly in a bad place because it has to put up contracts for competitive bidding. It’s crazy to pay both Boeing and SpaceX to develop a system to take astronauts to the International Space Station.

In your book, you state that we’ve had the technological capability to travel to Mars for at least 30 years, but that NASA’s shuttle-centric vision has stymied manned Mars exploration. Do you think NASA has any regrets about putting all of its eggs into the space shuttle basket?

Every person at NASA with whom I’ve discussed the shuttle program has been clear that it kept us from making any significant progress in human space exploration. Many followers of the space program seem to agree, in hindsight, that the shuttle and the ISS kept us from getting back to the moon and on to Mars. People in the space business don’t talk about it on the record because it’s not in their interest to criticize NASA.

When will the American public start to grasp the need for establishing a permanent presence on Mars?

When they begin to understand how threatened we are by the whims of the universe. A giant solar flare directed at Earth, a 10-mile-wide asteroid headed for us, even an all-out nuclear war between Pakistan and India, could wipe out civilization on Earth as we know it, if not kill every mammal larger than a rabbit. Even a virus could take us out. If nothing else gets us, the human species will become extinct when our aging sun begins to enlarge. We cannot survive without becoming a spacefaring species. That’s a simple fact, like climate change from human activity, which people would rather think about tomorrow. 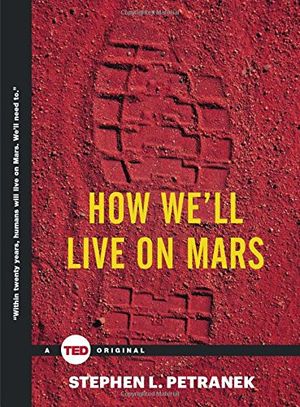 How We'll Live on Mars