In 1979 when I was 10 years old, I saw the Blue Angels perform at an airshow. After that, I dreamed only of becoming a Navy pilot and spent the next decade in fervent pursuit of that dream. I took my first flying lesson at 14; when I was 16, I soloed in a Cessna 150 and obtained my private pilot’s license a few months later. At 23, I began flight school with the Navy in Pensacola, Florida.

By October 1992, I was nearing the end of primary flight training. I tried to maintain “jet grades” as I progressed toward advanced training, where student aviators learn to fly jets, props, or helicopters. I wanted jets! One of the final phases was a short course in formation flying. At last I would learn at least a rudimentary version of what I’d seen the Blue Angels perform years before.

One early morning that October, I reported to Whiting Field, north of Pensacola, for my formation check ride. As luck would have it, I would be flying the check ride with the squadron’s meanest instructor: a perpetually sour Marine captain who excelled at nitpicking and ridicule. But that morning I felt more confident than I had on the earlier hops. I was a better flier now, more competent in the T-34C, and ready to meet his challenge.

I would be flying “wing”—in the wingman position—for the check ride, and the other student would fly the lead aircraft. Wing was the more difficult position on a formation flight. The demands of maintaining the correct distance from the lead airplane would be solely mine.

The T-34C turboprops at Whiting were painted white with orange markings. Fast, forgiving airplanes, the aptly named Turbo Mentor was the standard Navy trainer for student aviators of my generation; it would subsequently be replaced by the T-6 Texan II and its variants. The sweet smell of jet fuel mixed with Panhandle humidity on the tarmac. I felt ready to get this check ride behind me.

My instructor arrived, scowled at me, placed a dip of tobacco in his lower lip, and threw his flight gear in the backseat. The tandem cockpit design meant the instructor sat behind the student, quite literally breathing down my neck, which also meant I’d be smelling his tobacco juice for the next hour. I climbed into the front seat, stowed my gear, and began the pre-startup checklist.

As I taxied toward the runway, I did not know I was suffering from partial seizures caused by a rare form of epilepsy. I had felt no symptoms, certainly nothing that caused me alarm. I’d made it through four grueling years of the U.S. Naval Academy and countless tests and screenings to get into flight school. I’d been poked, prodded, and analyzed more than the vast majority of otherwise healthy 23-year-olds. So I had no concerns about my health as I watched the lead aircraft depart and, 10 seconds later, followed him into the sky.

We climbed to 5,000 feet, bouncing in choppy updrafts. Once we leveled off, I began to maneuver into parade formation off his starboard wing. I closed the distance carefully, shrinking the gap between our two aircraft. Markers on the other airplane—the pitot tube on his inboard wing, the UHF antenna, the orange striping on his tail—ensured I had proper wingtip to wingtip spacing (three feet) and stepdown, or vertical separation (five feet). My concentration was so intense I felt as if I could reach out and touch his wing.

My instructor had little to critique as I maintained parade position. We flew for several minutes in tight formation before we began the procedural tests: a turn away, a turn into, a breakup and rendezvous, a cross-under. For each test, my goal was to maintain the correct spacing with lead. Everything was going smoothly—until the moment it wasn’t.

What I remember most clearly, almost 30 years later, was the lead pilot’s hand signal to start the turn away, and his orange wingtip so close to my canopy.

Then I lost time.

When I came to, the sound of my instructor’s angry voice startled me, along with the sight of the lead pilot’s airplane drifting far, far away.

I didn’t know what had happened, had no idea that a seizure had hijacked my brain for several critical seconds. The lead airplane was shrinking but still visible, and I fought an instinct to bank toward it, to chase and reestablish my position, but my instructor cursed at me and took control from the backseat. A few minutes later, we landed back at the airfield. He climbed out of the cockpit, without saying a word.

By the time I had tied up the airplane and returned to the ready room, the flight surgeon had been called and told to expect me promptly. When I got to his clinic less than an hour later, he had conferred with a Navy neurologist. I spent the remainder of the day waiting for the neurologist to see me. He was kind, but he didn’t mince words. Before performing a single test on me, he diagnosed my epilepsy. He told me I would never fly again. 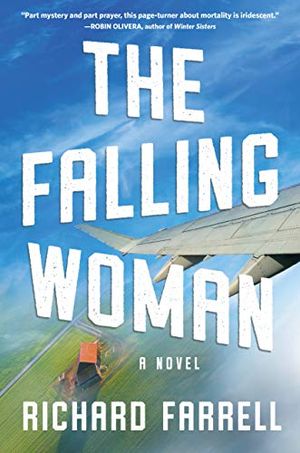 The Falling Woman: A Novel

In Richard Farrell's debut novel, one person survives the midair explosion of a passenger jet. But soon she becomes a national media sensation when “the Falling Woman,” as the press dubs her, disappears without a trace.

The Navy eventually sent me to Washington, D.C. for more tests, which confirmed that I was suffering from a condition known as gelastic epilepsy. And though the news was good—no tumors or lesions that required surgery—my military flying career was over. Six months later, I took a medical disability retirement.

It took years for me to gain perspective on that final flight. I had internalized my diagnosis as weakness, failure, a stain on my manhood. For a while, I prayed that something more serious was wrong with me—anything to remove the shame I felt after being ripped out of the sky by a relatively benign illness.

But with more distance from that flight, I’ve come to feel fortunate. At 23, I had a hard time accepting an outcome that didn’t end in wings of gold. But at 50, I realize how many worse outcomes were averted. I could easily have crashed. I might have suffered a seizure without a grumpy instructor behind me to take the controls and save my life. Time has filled me with gratitude for the fact that I am still here to tell the story of my final flight.