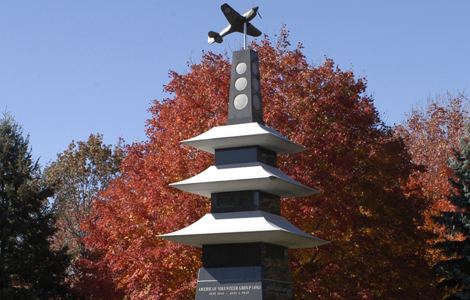 A memorial to the American Volunteer Group, better known as the Flying Tigers. Photograph: National Museum of the U.S. Air Force.

I had a 9:00 a.m. appointment with the curator who oversaw the restoration and display of the National Museum of the U.S. Air Force's MiG-29. I was early, and since the museum wasn't open yet and it was cold outside, I sat idling in the car. That's when I decided to take a closer look at the museum's Memorial Park, a scattered collection of monuments next to the parking lot. 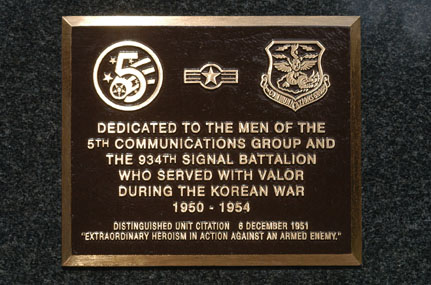 The men of the 5th Signal Group, remembered for their Korean War service.

There was time to kill, so, braving the frigid (from the perspective of a Miami resident) Ohio morning, I strolled over and chose a path at random—one of many meandering through the tall trees.  Most visitors, myself included, probably walk past this place quickly on their way into the museum.

The Fourth Fighter Group—which flew P-51s, P-47s and Spitfires, was the highest scoring group in WWII.

What a shame. On this morning hundreds of memorials revealed themselves, many still covered with early morning dew as the fog burned off in the adjacent fields.

There were the expected tributes to the most storied units in Air Force history—the American Volunteer Group (better known as the "Flying Tigers"), and the Eighth Air Force, the iconic group whose B-17s and B-24s showed the value of strategic bombing (of course, depending on who you talk to). These art deco memorials were imposing, and sometimes surprisingly beautiful. 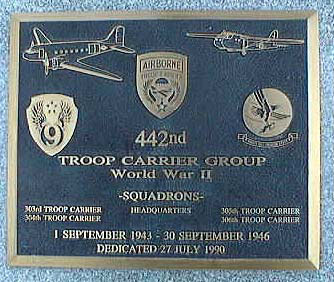 Now an Air Force Reserve A-10 unit, the 442nd's heritage came from hauling gliders over Normandy.

It was easy to overlook some of the smaller markers along the paths, but these also caught my interest. I spotted a plaque dedicated to the 442nd Troop Carrier Group, the ancestor to my old Air Force Reserve unit, the 442nd Fighter Wing. During World War II, the 442nd played a role in the Normandy and Operation Market Garden airborne assaults, and after the war the unit carried on its cargo heritage by flying C-124s and C-130s, until it was re-equipped with A-10 "Warthogs" in the 1980s. Nice to have a small connection here.

Some tributes honored lesser known units like the support personnel of the World War II 390th Bombardment Group and 5th Communications Group during the Korean War. Others were dedicated to a single person, such as 23-year-old Lieutenant David Axthelm, memorialized by the 13th Fighter Interceptor Squadron after the crash of his F-86D in 1953.

Next time you're in the Dayton area, take some time to walk among the more than 500 memorials honoring the service and sacrifice of Air Force units and individuals.