When it comes to planning a trip to see an eclipse, “Those who hesitate are lost,” says Frank Close, who has written one of several books coming out this spring ahead of the August 21 solar eclipse. (We wrote about Anthony Aveni’s In the Shadow of the Moon earlier.) Close, a physics professor at Oxford University, has written a more personal story in Eclipse: Journeys to the Dark Side of the Moon (Oxford University Press, available May 1).

He saw his first eclipse in school in 1954 in his hometown of Peterborough, England. It was only a partial eclipse, but his teacher helpfully informed the class of eight-year-olds that if they waited nearly half a century, a total eclipse would grace their country on August 11, 1999 in Cornwall. Close remembered. The experience moved him so much he became an eclipse chaser, seeking out totality where it appeared all over the world.

Some of those locations can be quite remote. Eclipses don’t have the politeness to only appear over metropolises, handily built to accommodate an influx of tourists. So eclipse chasers create their own towns. Close’s travelogue describes his trips, after Cornwall, to Zambia in 2001, Libya in 2006, and a boat off the coast of Western Sahara in 2013. He profiles some of the strange cast of characters who do the chasing, and documents the struggles of getting to the location—sometimes nothing more than GPS coordinates in the middle of nowhere.

Close’s trip to Libya is perhaps the best example of the strangeness of this hobby.

Some 300 miles south of Benghazi, [a] highway would intersect the eclipse path at a point 28° 14′ 3′′ north of the equator, and 21° 29′ 25′′ into the eastern hemisphere. This previously undistinguished grid reference became a target for eclipse chasers. I discovered that at this spot some intrepid adventurers planned to set up a temporary encampment of tents, which they had grandiosely named “Eclipse City.”

After making it to Benghazi, the chasers gathered at 3 a.m. in a caravan of buses to begin the trek to Eclipse City. Unfortunately, a few hours later, the rest of Libya’s population joined them on the road.

Motorbikes slalomed in and out, overtaking one bus, undertaking another. Cars quit the tarmac and trespassed onto the sun-baked earth, which paralleled the road and was hard as rock. But for the more impatient, adventurous, or reckless among them, the highway and its adjacent stony ribbon weren’t challenge enough. Like a jet of water released from the nozzle of a fire-hose, vehicles sprayed onto the sands beyond the solid periphery. Clouds of dust, like a sudden sandstorm, obscured our vision. The buses slowed as the wave of cars, jeeps, bikes, swept past us.

The group made it to a spot underneath the eclipse path with minutes to spare, although it was just short of the encampment, which they didn’t discover until after the main event.

Instead of returning towards Benghazi we continued south for a mile, and pulled off the highway and onto a track, to be greeted by a surreal sight. “Eclipse City” was more than a tourist headline, it was a physical entity: a temporary encampment had been built in the desert. There were hundreds of tents…and row upon row of what looked at first to be beach cabins, but turned out to be portaloos. Entrepreneurs had set up stalls to sell T-shirts…. There were also several swarthy, athletic men, who seemed to be more like covert security staff than eclipse chasers. Sporting boots, neatly pressed slacks, and shirts that would have graced Savile Row, their sartorial elegance was hardly de rigeur for the Sahara…. Then events became even more bizarre.

We heard a deep throbbing sound, which grew steadily louder. Its source was suddenly revealed as a large military helicopter, which appeared over the dunes, circled the camp, and then landed, about a mile away. The swarthy athletes were now revealed to be security men…. Muammar Gaddafi, or someone made up to look like him, in dark green uniform, red epaulettes on his collar, and the trademark sunshades covering his eyes, stepped from the helicopter into the sand.

In the last chapter, Close discusses all the potential pitfalls for traveling to the eclipse in the United States in August, with some suggestions based on his experiences. “You could be one of over 100 million for whom the path [of totality] would normally be within a day trip by car. Thus if you make the trip, be assured that you will not be alone. Leave early!”

Unlike In the Shadow of the Moon, which brings you closer to eclipse-watchers and the stories they’ve told about the lightshow throughout history, Eclipse brings you closer to the legions of people who are jittering in anticipation of coming together in August for slightly under three minutes. If you want someone to explain to you why anyone would travel just to see the moon move in front of the sun, or perhaps were looking for that last push for a drive to Charleston, South Carolina this summer, this book will provide both of those for you. You can hear more from Frank Close in an interview for this recent podcast episode (in fact, its premiere) of Every Little Thing about eclipse chasers.

Read more of our 2017 eclipse coverage. 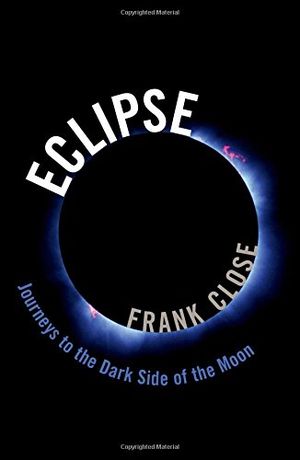 Eclipse: Journeys to the Dark Side of the Moon

On August 21st, over one hundred million people will gather across the USA to witness the most-watched total solar eclipse in history. Eclipse: Journeys to the Dark Side of the Moon, by popular science author Frank Close, describes the spellbinding allure of this beautiful natural phenomenon. The...