I recently had the opportunity to attend and speak at a special meeting of the Royal Astronomical Society called by Ian Crawford of the University of London. Like myself, he is interested in the possible use of the Moon’s resources, which includes the mining and processing of polar ice to create new capabilities in space. In coordination with Martin Elvis of MIT and James Carpenter of the European Space Agency, Crawford convened a special one-day meeting in London to discuss the problems and possibilities of using space resources. The conveners did a superb job assembling an interesting and informative program. It was an enjoyable day, with talks covering a variety of perspectives on how resources in space might be used. I was honored to be among them. The meeting was covered by both print media and BBC radio.

This meeting was notable for something else. Twenty years ago, discussions about the use of the material and energy resources of space were limited to a very small “fringe” group of true believers. The majority of scientists and engineers—those who actually had the responsibility to design, build and fly real space missions—viewed using space resources as science fiction not worthy of serious consideration. That sentiment still prevails, to some extent, but I’ve begun to sense that the Zeitgeist might be slowly changing on this issue. More and more “serious” types are now seriously considering the practicality of using what we find in space to create new capability—seeing that ISRU (in situ resource utilization) actually makes good sense.

Much of the resistance to the idea of using space resources comes from the innate conservatism of design engineers, an attribute usually won through hard experience. Typically, designers are skeptical of innovation, preferring the familiar and proven to the novel and untested. Every new feature in the design of a spacecraft or mission architecture is a potential failure point. Rightly, engineers tend to make sure that requirements dictate the design, leaving innovations for only those new and untried things that are required by changing and more challenging objectives.

Given their inherent risk aversion, how should we approach the goal of incorporating extraterrestrial resources into new ways of exploring and using space? As the extent of our reach increases, one can imagine a strategy that gradually and incrementally begins to use local materials. But we should also consider the degree to which we must alter what we find in order to use it. Thus, early use of resources with minimal change can gradually give way to the later use of intensely processed product as the principal source of materials and energy for humans living off-planet.

At the beginning stages, we lack experience in locating, acquiring and processing space resources. Our first needs, therefore, are to understand what we have, what is the physical and chemical state of the resource, how it varies in concentration and location (at meter- to kilometer-scales), and what kind of processing the resource will require. For most space resources, we know virtually none of these things. Thus, the first steps will likely involve specialized robotic missions designed to gather and report this strategic knowledge. In terrestrial mining, this phase is called prospecting and involves not simply reporting a result (e.g., yes, water ice exists at the poles of the Moon) but rounding out this affirmative with detailed information on ice distribution, states and accessibility (e.g., ice is found in this crater, three meters thick at 50 percent concentration).

Prospecting can be done both from orbit and from the surface. Typically, the most efficient way to proceed is to take general remote surveys from a distance (orbit or flyby) and then land at carefully selected spots to “ground truth” the remote data. While we do possess much orbital remote data about the lunar poles, more measurements by different sensors are needed to give more regional detail. As we seek to characterize the deposits at a variety of scales and fidelities, landed missions (possible through a variety of techniques, including hard landing probes, soft landed fixed spacecraft, and finally surface rovers, either hopping or overland) will be needed.

Prospecting should be followed by demonstrations. Small robotic landers can carry miniaturized laboratories and processing plants that take the feedstock and produce product (such as water) in demonstration amounts (a few kilograms). Automated missions are a good way to validate an anticipated processing scheme and positively influence major revisions to the architecture design. As an example, there is some question about the physical hardness of lunar polar ice deposits—is it rock-hard, like indurated concrete (requiring drilling and blasting, as in terrestrial hard rock mining) or is it a fluffy, low density aggregate, like a mixture of dry snow and dust? There are lines of evidence supporting each of these ideas, but which is correct and where? Small resource utilization demos can answer at least some of these questions.

Along these lines, there is a plan to fly a small mission to acquire these data. NASA’s Resource Prospector is a rover designed to land in an area of sunlight at one of the poles of the Moon. From there it will traverse to a permanently dark area to measure the amounts of water present, dig up this soil and extract the water by heating the soil in a small oven. Although this mission is small in scope (one landing site and a short traverse), it will collect critical information about lunar polar ice essential to its future use.

Incorporating resource utilization into future space plans will be resisted by some, but the more we know about it, the more comfortable engineers will be in its use. In addition, the less critical resource processing and use is to mission success, the more likely it will be incorporated. Such reasoning leads to another principle for resource risk reduction: first use the resources that require the least amount of processing. In lunar terms, the easiest material to use first is the regolith, or soil of the Moon. Bulk regolith can be used in a variety of applications, such as blast berms, i.e., piles of soil that protect surface elements from blown dust from rocket engine exhaust. Small robotic bulldozers (the size of terrestrial riding lawnmowers) can create such berms, smooth out roadways and paths, and cover surface habitats with soil for radiation protection. The next step in minimal processing would be to sinter (melt) the soil to create glass or ceramics. Such material has many uses at a lunar outpost, including road paving, electrical insulators, and piece parts made with 3-D printers. Only in the more advanced stages of lunar development should we consider industrial processes, such as metal extraction and refinement. But even these activities can be done as small-scale demonstrations using robotic machines.

Incorporating resource utilization into future space plans requires buy-in from the engineers that design these systems, and their principal concern is risk—both to the lives of the crew and to mission success. An incremental strategy, which gradually introduces resource utilization into mission plans, is the best way to address this concern. This would begin by using the lowest level processing to gradually obtain strategic knowledge, demonstrating the needed retrieval and processing skills. We could then gradually increase its use in space systems as we gain experience and new knowledge.

So it was very encouraging that at the London RAS meeting, the attending scientists were readily accepting of the basic principles of using space resources. This is a major accomplishment, given previous widespread skepticism about the practicality of using of space resources. Perhaps attitudes are shifting.

Now we just have to convince all those engineers.

(Note: I elaborated on these ideas about lunar resource development in a recent talk to the American Society of Civil Engineers. More information can be found in my just-published book, The Value of the Moon: How to Explore, Live and Prosper in Space Using the Moon’s Resources (Smithsonian Press, Washington DC, 2016). 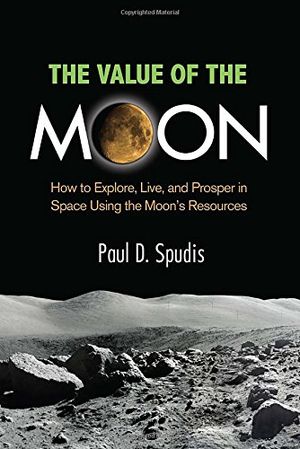 The Value of the Moon: How to Explore, Live, and Prosper in Space Using the Moon's Resources