We are at nature's mercy everywhere, but in flight that fact is much more difficult to forget. Although human aviation is a glorious achievement, it is not, strictly speaking, natural, as pilots and passengers are frequently reminded.

At the Boeing-Vertol plant adjacent to Philadelphia International Airport, which produces the big CH-47 Chinook helicopter, my operations officer and I learned a severe snowstorm was developing enroute to our home base in Lakehurst, New Jersey.

On March 8, 1984, we immediately departed in our UH-1H Huey on a special visual flight rules clearance due to icing in the clouds. Approaching McGuire Air Force Base airspace, we contacted the tower and monitored an emergency in progress. A student pilot flying cross-country in a Cessna 150 was caught in the storm, totally disoriented, and running low on fuel.

Working with the U.S. Air Force air traffic controller, we were vectored to the student’s general location and began searching for him. As we made initial visual contact with him, he was 500 feet above and a quarter mile ahead of us. He reported that his airspeed indicator had dropped to zero due to icing.

At that point we lost him in a snow squall. Now our search became much more difficult; like looking for a polar bear in a snow bank.

We regained contact and had him drop down to our altitude, 1,200 feet, and pulled in front of him on his left side. We had him place our aircraft in a spot on his windscreen and keep us there. We then received vectors to runway 24 instrument landing system at McGuire and had him set up for an approach.

A mile out, we distinguished the runway and approach lights and watched him land safely, before continuing to home base. —Martin S. Kleiner, Carlisle, PA | Joseph G. Kaufmann, Gettysburg, PA

I was a flight test engineer on temporary duty at Holloman Air Force Base testing the new F-106. I’d started flying lessons in a J-3 Cub a couple of weeks before at a little dirt strip just outside town.

At the strip, the instructor and I took off and made three landings. The air was absolutely calm. After the last landing he had me make a full stop, and he got out. “Go fly around for 20 minutes,” he said, “and come back and make three landings.”

Without the weight of the instructor, the J-3 leaped into the air. I headed for the town, joyfully singing “Off we go into the wild blue yonder.”

What a feeling. Here I was up all by myself!

On the downwind leg, I looked down and the windsock was stiff as a board, directly across the runway. Now, I had never made a crosswind landing, although I had read about how to do it.

I should describe this field. The runway was a narrow dirt track plowed through the sagebrush with a hill in the middle.

Now, I was getting scared. To hell with the book learning. This time I crabbed into the wind until my track was down the strip. I watched the runway come up through the right-hand window. As I flared, I kicked the rudder and lined it up. I made the best three-point landing of my short flying career.

My instructor signed me off for three landings solo. Because of the hill, he didn’t see that I hadn’t landed the first two.

I was a student pilot authorized to fly solo under visual flight rules only. One fall afternoon I took off in a Piper Tomahawk from Mangham Airfield directly west of Dallas/Fort Worth International Airport. I decided to ascend a few thousand feet and fly directly west to practice some turns. As I ascended I saw a cloud bank in the distance at a lower altitude moving out of the west and toward me. Just as I began to descend, the bank swooped right under me. The ground was now completely hidden in all directions and I was in deep trouble.

Mangham was now east of me and DFW east of Mangham. If I began to fly east, I might find myself in restricted and congested airspace. There was only one thing I thought I could do: Descend through the cloud bank until I could see the ground. Until then, it would be instrument flight rules for the first time, a scary thought.

Fixing my eyes on the altimeter, compass, and artificial horizon, I began to descend, paying no mind to signals from my body. Soon I was in the clouds, tense and worried as I watched the altimeter wind down. Finally, the clouds began to break and I was soon situated under the bank. Shaken, I breathed a long sigh of relief.

After landing at Mangham, I literally kissed the asphalt. —Samuel Bostaph, Champaign, IL

The air was clear but a little bumpy. I was supposed to be 500 feet above the ground but that varied by the way the terrain was under me. My instructor pilot and I had talked about different ways to cross a ridge line. Like me, he preferred to pull up to start the climb to cross over the ridge, then roll inverted and pull positive Gs going over the top of the ridge, then roll upright once the nose is pointed down again.

As I got the T-38 climbing, I checked the instruments and noted that everything looked good, except for the G-meter. It was pegged in both directions.

My instructor pilot confirmed good gauges with me then noted that I shouldn’t look out at the T-38. I looked anyway and didn’t like what I saw.

After doing a controllability check, I made a no-flap landing back at Holloman. We examined our T-38 and found something that looked more like a mini-F-4. The outer wing panels were bent upward, the horizontal stabilizer was bent down, and the vertical tail was three to five degrees off. That T-38 never flew again but it got us home. —Alton “Tuna” Dobbins, Mustang, OK

Monsoon season in Phoenix brings thunderstorms or dust storms nearly every afternoon. I was almost finished with my instrument rating training and needed only a little more time “under the hood.” With my safety pilot we flew around the practice area 20 miles northwest of Scottsdale Airport. Turbulence increased and distant lightning appeared. My safety pilot said we needed to head back, right now.

Our Cessna 172 was now rocking hard. The airport was reporting 15-knot winds. Angry masses of cloud swept toward us. As I turned onto final approach, the tower reported winds gusting to 35 knots. I wrestled the controls to stay lined up with the runway. Then visibility dropped to zero. A dust storm had swept the field.

My instrument training saved us. Holding runway heading, we touched down hard. I stood on the brakes, but it seemed we were still moving fast. Finally I opened the cockpit door and looked down. There I saw the runway centerline, comfortingly stationary, just under the left main tire. I took pains never again to fly near storms, but I passed my instrument check ride the following week. —Roger Philips, Irvine, CA

Barf-O-Rama Over the Grand Canyon

During the summer of 1980, I flew Cessna T206s and T207s up and down the Colorado River from Las Vegas to Lake Powell for SkyWest Airlines out of St. George, Utah. There were some stops along the way at Dolan Springs and Tuweep, Arizona, and at Webb’s Ranch and Cedar City, Utah, and a few others.

During my checkout, I was told the most important part of the safety brief was the barf bags. Seat belts, fire extinguisher, door, and barf bags. It could get very bumpy over the Grand Canyon in the summer, and there was no air conditioning in the Cessnas. That summer, I picked up seven passengers from either Tuweep or Dolan Springs and headed for St. George. (Amazingly, my logbook doesn’t mention the details.) The heat and turbulence over the Canyon did its work, and one barf led to seven. Somehow I held it in and when we landed my passengers formed a line and marched off with their barf bags. I was so proud of them, because they all hit the bags perfectly.

At the little dirt strip stops, we would check weight and balance by getting out of the loaded airplane and pushing up on the spinner. If it settled back on the nose wheel after release, you were good to go. It was an experience I will never forget. —Ed Keene, Waterford, CA 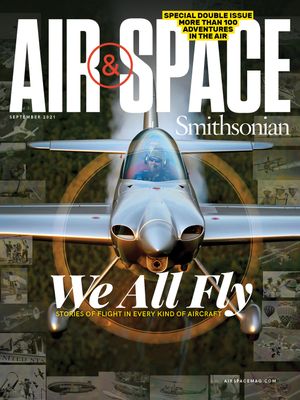