In 1935, American explorer Lincoln Ellsworth and his pilot, Herbert Hollick-Kenyon, made the first airplane flight across Antarctica. In Antarctica’s Lost Aviator, Jeff Maynard explains how the two men completed their journey, but not before the perils of crossing the desolate continent nearly cost them their lives. Maynard spoke with senior associate editor Diane Tedeschi in February.

Maynard: I had read references to Lincoln Ellsworth in other books on polar exploration, but he always seemed to be this shadowy, enigmatic figure in the background. That intrigued me. When I began to research him, I quickly learnt about his expeditions to the Arctic and the Antarctic, but nowhere could I discover what motivated him. He certainly wasn’t chasing money, because he was enormously wealthy. And he didn’t seem to be driven, or obsessive, like some explorers. It was the opposite. He seemed very casual about it all. By the time I found his lost records, photographs and films, I felt I had no choice but to tell his story.

Even with today’s technology, flying over Antarctica is extremely risky. Are you surprised that Ellsworth and Hollick-Kenyon survived their record-setting flight?

If you look at it logically, the flight was nothing short of miraculous. Ellsworth and Hollick-Kenyon had everything going against them. They did not know what they were flying over. It could have been mountain ranges or open sea. Navigation, with just a magnetic compass and sextant—especially so close to the South Magnetic Pole—is incredibly difficult. I doubt anyone would attempt it today. Added to that, Ellsworth was not a proficient navigator. Yet he eventually crossed a featureless white landscape larger than the United States, and did it within half a degree of accuracy. I still shake my head in disbelief when I think about it.

Do you think Ellsworth’s 1935 flight over the Antarctic was reckless?

They had planned for all the factors they knew. For example, they knew how far they had to fly and how much fuel they had. But they did not know if they would encounter head winds or storms. Nor did they know how high they would be flying. The only interior area of Antarctica that had been reached was the South Pole, which has an elevation of 9,000 feet. Ellsworth had no way of knowing he would encounter a mountain range with an elevation of 16,000 feet. By the time they reached the mountains, and struck the head winds, it was too late to turn back. That they got so close before running out of fuel is, in itself, a validation of the careful planning.

What kind of newspaper coverage did Ellsworth garner before the flight?

During his expeditions, Ellsworth was front-page news almost every day. You have to remember that this took place at the height of the Great Depression. People wanted escapist news, and an American flying into the unknown to explore the last frontier on Earth kept everyone enthralled. Ellsworth’s crew on his ship could send radio messages to New York, and from there the news was relayed around the world. Of course, when Ellsworth and Hollick-Kenyon disappeared, the news became even more dramatic. After nothing was heard for weeks and people had given them up for dead, the news updates began to drift back in the papers until, a month after he disappeared, Ellsworth was lucky to make page 30. But as expeditions set off to Antarctica to look for him, the drama of the searches brought Ellsworth back to the front page.

The flight was a remarkable achievement. Why isn’t the story more well-known?

Ellsworth recorded very little and was a bit of a recluse. He certainly did not go around promoting himself. So other than contemporary newspaper accounts, we haven’t really known very much about what went on during the Ellsworth expeditions. But the man who organized much of the work on behalf of Ellsworth, Sir Hubert Wilkins, recorded and kept everything. Wilkins kept all the radiograms, correspondence, crew instructions, flight logs, navigational calculations, and even the lists of supplies that were carried. Wilkins even filmed and photographed the expeditions. After Wilkins’ death in 1958, that material was held privately by his personal secretary, who later passed it on to his son. I had been researching Ellsworth for years, when I found the material in 2014. It opened up the whole story for me.

What do you make of Ellsworth’s place in history?

His actual accomplishments are grossly underrated. He succeeded in a flight over the North Pole in an airship with Norwegian explorer Roald Amundsen in 1925, and, after many setbacks, he succeeded in becoming the first person to cross Antarctica. It’s ironic that few people have heard of him, while other explorers have gained legendary status. Sir Ernest Shackleton, for example, went to Antarctica four times, and every time he failed in the objectives of the expedition. But Shackleton is considered by many to be the greatest polar explorer of any era. History is a fickle judge. 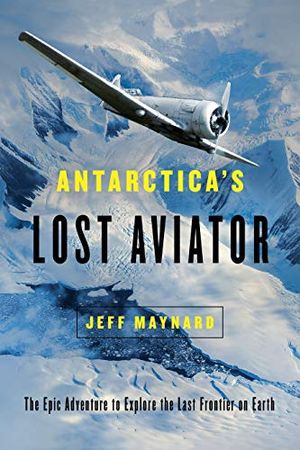 Antarctica's Lost Aviator: The Epic Adventure to Explore the Last Frontier on Earth

The astonishing voyage of the first solo crossing of Antarctica by the unlikeliest of arctic explorers.