Mars is back in the headlines, and this time the chances of finding fossil life on the Red Planet have increased.

Last month a team led by Munir Humayun of Florida State University reported on the oldest Martian rock discovered so far. The meteorite, found last year in North Africa, dates from about 4.4 billion years ago, a mere 100 million years or so after Mars became a planet. Named “Black Beauty” because of its dark glossy appearance, the rock known formally as NWA7533 originated when water flowed on the surface of Mars—a time when we would expect that life arose on Mars, if it ever did. Black Beauty’s elemental and mineralogical composition gives us a glimpse of environmental conditions during that intriguing period of Martian history.

It appears that the meteorite came from the southern highlands of Mars, a region about which we know relatively little. The landscape there is covered with craters, the largest of which is the Hellas Basin, about seven kilometers deep and more than 2,000 km across. The basin resulted from an impact that must have had planet-changing repercussions at a time when Mars was warmer and wetter than today. We see evidence of that wetter past in the networks of river systems and valleys found throughout the southern highlands. 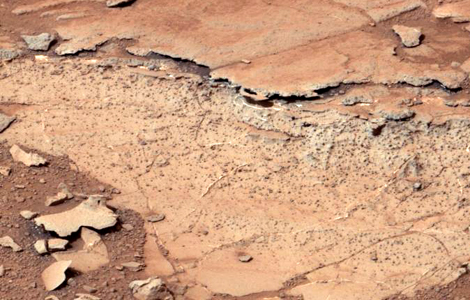 The Sheepbed Mudstone on Mars. Low salinity, tolerable acidity and other traits would have made this ancient lake hospitable to life. (Image: NASA/JPL/MSSS)

New reports from NASA’s Curiosity rover science team suggest that even long after that planet-changing event, Mars retained habitable environments—regions where life could have thrived, at least on a temporary basis, for a minimum of tens of thousands of years, and perhaps up to tens of millions of years. This is the most astonishing result from the analysis of fine-grained sedimentary rocks at Gale Crater, where Curiosity landed 16 months ago. John Grotzinger and his team analyzed these rocks and came to the conclusion that the so-called Sheepbed Mudstones formed in an ancient lake that would have been suitable to support life on Mars.

None of the new data, either from Black Beauty or the Curiosity rover, can prove that life actually existed on Mars. Black Beauty was discovered in the Sahara desert, and has likely been thoroughly contaminated by Earth life since it fell from the sky. Even if it contained some remnant of Martian life, it would be nearly impossible to distinguish it conclusively from Earth life, especially since we don’t have much of an idea what the chemical characteristics of Martian life would be.

The most intensively studied Martian meteorite, known as ALH 84001, was found in Antarctica, and scientists were able to rule out Earthly contamination within the interior of the rock. But the claim in 1996 that this meteorite contained fossilized life is still very controversial. While hardly anyone believes anymore that the images interpreted as possible microfossils actually represent Martian organisms, magnetic chains discovered in the rock and the close association of reduced and oxidized regions within the meteorite can best be explained by biological processes.

The new Martian meteorite will improve our knowledge about geological and environmental conditions in the southern highlands of Mars around 4.4 billion year ago, as well as the period about two billion years ago when volcanic activity added newer material to the rock that later became the meteorite. Amazingly, even that younger part of the meteorite was rich in water, having about 10 times more than comparable meteorites. In light of the new Curiosity results, that no longer seems surprising.

The best way to answer some of these questions, of course, would be to bring back samples directly from Mars with a Mars Sample Return Mission or a human expedition. But until that happens, Martian meteorites and the rocks studied by Curiosity are the next best thing.