Steven A. Ruffin, a retired U.S. Air Force colonel, writes frequently about aviation history. He is the author of the recently published Flights of No Return, a collection of narratives about more than 20 puzzling flights, divided into four sections, including “Lapses in Judgment” and “Into the Twilight Zone.”

Ruffin: After a lifetime of reading about aviation history’s many ups and downs, it struck me that some of the best true flying tales involve those flights where something went wrong—specifically, those from which one or more of the participants never returned.

What did you learn about human nature after researching these cases?

None of the tragedies I chronicled in this book were caused by an incompetent pilot. In every case, those involved were proficient—many of them record-setters, airline, or military pilots. However, in spite of their expertise, some of them became victims of their own sometimes subtle—but unfortunate—blunders.

Were you surprised by any of the flights in terms of what transpired before the mysterious outcomes?

I certainly was. I spent several years researching these incidents, and in so doing, discovered facts about each flight that I had not seen before. For example, who knew that the U.S. Coast Guard found a piece of what may have been Nungesser and Coli’s airplane, soon after [the French pilots] went missing [in May 1927], yet never made it public? Or that a credible secret informant revealed information to the FBI on the location of Congressman Hale Boggs’ airplane that may never have been acted upon? Or that the mother-in-law of the missing pilot of U.S. Navy blimp L-8 reported seeing him in Phoenix five years after he went missing? I could give many more examples, but you get the idea. Suffice it to say, I believe readers will be surprised at some of the findings revealed in this book. 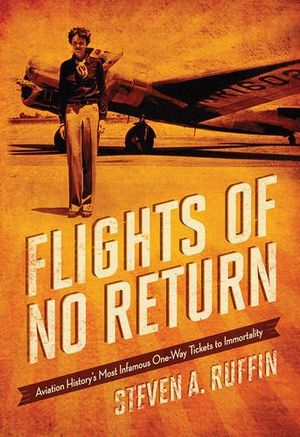 Flights of No Return: Aviation History's Most Infamous One-Way Tickets to Immortality

Discover the mysterious, controversial, and sometimes downright eerie history of flights that didn't end as planned. Pilot and aviation writer Steven A. Ruffin covers the entire 230-year span of manned flight in all types of aircraft through war and peace.

In reading your account of Steve Fossett’s last flight, which his wife described as “a Sunday drive,” I wondered if the simplicity of the flight somehow encouraged him to drop his guard—especially because he had made much more demanding flights before.

It is difficult to arrive at any other conclusion than this. Complacency is one of the most insidious dangers any pilot has to face. Contrary to conventional logic, new pilots may actually be safer in some ways than more experienced pilots. They tend to pay more attention to the fundamentals. Steve Fossett was probably the world’s most accomplished living aviator, an outstanding pilot in every way. He took calculated risks, but he was no daredevil. Yet he flew a very small airplane close to mountains with air currents so vicious that—at least, as it now appears—they ripped his airplane from his control and smashed it into the mountainside. He must have known it was a bad idea but, given his phenomenal record, may have felt invincible.

As a pilot yourself, could you relate to some of the unfortunate decisions made by the pilots involved in any of these incidents?

I related to the pilots in almost every case. Certainly, the distracted Eastern Airlines Flight 401 crew, who allowed their perfectly airworthy Lockheed L-1011 to fly into the Florida Everglades one dark night, seems particularly unforgiveable—but their behavior is understandable when viewed in its full context. I always flew with great care but, over the years, made some of the same mistakes as the pilots I wrote about. The only difference is that my mistakes didn’t end my life.

Do you think any of the cases covered in your book can still be solved? Or have most of them reached the point of no return?

There is still a great deal of interest in several of these flights, and as a result, they are being actively investigated. I believe the Amelia Earhart mystery will someday be resolved. Searchers continue to sift through island debris and scan the ocean floor in the area where she is believed to have disappeared. Likewise, some part of Nungesser and Coli’s airplane may eventually turn up—either at the bottom of the sea or in a remote forest in the northeastern U.S. Congressman Boggs’ Cessna is still lying somewhere in the wilds of Alaska, so it could very well reappear someday in the spring melt. It is even possible that the five U.S. Navy torpedo bombers of Flight 19 may be found, perhaps in a Georgia swamp.

However, even if these aircraft are eventually located, we’ll still never learn the entire story of what went wrong. The mystery behind all these infamous flights is precisely what makes them so fascinating, and after so many decades of intrigue and conjecture, do we really want to know all the answers?