Four hundred years after Galileo Galilei pointed the first telescope at the stars, astronomers devised instruments that could look beyond what optical telescopes reveal. The Chandra X-Ray Observatory, launched on July 23, 1999, aboard the space shuttle Columbia, is a highly sophisticated descendant of the early X-ray instruments. Orbiting 85,000 miles above Earth and operated by the Smithsonian’s Astrophysical Observatory in Cambridge, Massachusetts, the telescope is designed to detect X-ray emissions from extraordinarily hot regions of the universe. Over nearly two decades, Chandra has revealed a universe of violent and extreme environments. With it, scientists have studied intense gravitational and magnetic fields around black holes, supernova shock waves, and titanic collisions between clusters of galaxies.

Text adapted from Chandra’s Cosmos: Dark Matter, Black Holes, and Other Wonders Revealed by NASA’s Premier X-ray Observatory by Wallace H. Tucker, to be published on March 28, 2017, by Smithsonian Books.

The Spread of Star Stuff

In massive stars, nuclear fusion turns hydrogen into helium, and eventually into heavier elements. Stellar winds and supernova explosions, which occur once the star uses up its fuel, spread these heavy elements out into space. One of Chandra’s greatest successes has been in tracking how those elements spread through and even between galaxies.

Chandra images, like the one above of galaxy M82, show the speed of supernova shock waves spreading oxygen, silicon, sulfur, calcium, and iron. Those elements may eventually coalesce to create new stars with planets. Chandra has even detected oxygen produced in some of the first supernovas, 10 billion years ago, in filaments of gas, millions of light-years long, stretching between galaxies.

The target for Chandra’s first observation, made 17 years ago, was Cassiopeia A, the remnants of a supernova. Cas A, a strong source of X-rays, had been observed by every previous X-ray telescope, so the quality of Chandra’s image would be a test of just how good this new telescope was.

Scientists and engineers who had worked on the telescope for more than a decade crowded in front of a computer monitor. At 8:40 p.m. on August 26, 1999, there it was: a dazzling image of the remains of a star that had exploded 10,000 light-years away. It was the best X-ray image ever made of an object outside our solar system. The team quickly noticed a tiny bright dot in the middle of the remnant. In its first look, Chandra had discovered what no previous telescope had found: the neutron star left over from the explosion that had produced Cas A three and a half centuries earlier.

We live out in the suburbs of the Milky Way, far from the galaxy’s center. The dust and gas produced by the millions of stars between us and the center make it impossible for even the most powerful optical telescopes to see into this region. Fortunately, radio, infrared, X-ray, and gamma-ray radiation can travel through the galactic smog. Chandra’s unique ability to resolve X-ray sources as small as 0.1 light-year across has led to major advances in the understanding of high-energy activity in the previously obscured inner Milky Way.

This panoramic X-ray image shows a view of the galactic center extending out 400 by 900 light-years. There are supernova remnants (the right side of Sagittarius A, another remnant labeled “SNR 0.9‑0.1,” and a filament stretched by stellar winds: the “X-ray Thread”), bright binary X-ray sources containing a black hole or a neutron star (1E), and hundreds of point-like sources that are neutron stars or white dwarfs lighting up the region. The massive stars in the Arches and other star clusters (DB) will soon explode to produce more supernovas, neutron stars, and black holes. Infrared and radio telescopes have also revealed giant star-forming molecular clouds (Sagittarius A, B1, B2, and C, and the cold gas cloud near the Radio Arc), the edges of which are glowing with X-rays because of heating from nearby supernovas.

What Gets Left Behind?

When a super-heavyweight star, with the mass of more than 30 suns, reaches the end of its lifespan and explodes in a supernova, the remaining core either stabilizes into a compact neutron star, or it collapses completely—into a black hole. Because the supernova envelops the core in a cloud of ejected gas, it can be difficult to detect whether the result is a neutron star or black hole.

One of the best candidates for a black hole at the center of a supernova remnant is W49B. The cloud’s unusual shape indicates that when the star exploded, it ejected much of its matter along its poles. Astronomers have used Chandra in an intensive search for evidence of a neutron star but have come up empty, a finding that suggests the supernova left behind a black hole instead. The supernova occurred about 1,000 years ago, so if W49B does contain a black hole, it would be the youngest one ever discovered.

Cygnus A is one of the most spectacular examples of a supermassive black hole producing radio and X-ray jets. This image, a composite of Chandra observations (in blue) and those from the Very Large Array radio telescope (in red), shows a large, football-shaped cloud of hot gas extending over several hundred thousand light-years. The faint regions, or cavities, are evidence of repeated explosions from the black hole.

Cygnus A is located within a cluster of galaxies, and some astronomers believe it was formed from a massive collision that created the black hole and supplied the gas and dust that now feed it, resulting in the enormous energy output Chandra observes.

In 1987, a star in the nearby Large Magellanic Cloud exploded, giving astrophysicists a front-row seat to one of nature’s grandest spectacles: It was the brightest known supernova in almost 400 years, visible even without a telescope.

Chandra has been observing the remnant since the beginning of the telescope’s mission, 12 years after the star exploded. The observations have traced the path of the shock wave and probed the gas around the star, and the results have confirmed astronomers’ basic ideas of how a supernova progresses after a star’s core collapses. About 16 years after the explosion, the shock wave moved through and lit up a dense ring of gas that was created around the star long before the explosion. At 26 years, in mid-2013, the X-ray intensity flattened, as the shock wave apparently left the dense material and moved into the space beyond.

Astrophysicists are hoping they and Chandra will still be around for the appearance of the neutron star they believe the supernova left behind. Chandra has not yet detected anything through the dust and gas, and it could be another hundred years before the veil lifts.

The supernova of 1572 occurred before the invention of the telescope, at a time when the concept of an exploding star was less plausible than witchcraft. But when a star brighter than the planet Venus appeared suddenly in the constellation Cassiopeia, it was noticed throughout much of the world. Astronomer Tycho Brahe saw it immediately and made detailed descriptions of the new star, or nova, which was later named for him. The explosion of the star shattered the widely accepted belief that stars were static objects.

We now know that when a supernova occurs, interstellar matter is swept up by the shock wave into a thin shell. This material, which is mostly hydrogen gas with some heavier elements and dust grains, is heated to millions of degrees and broken down into protons and electrons, which are accelerated to extremely high energies. Electrons spiraling around the magnetic field behind the shock wave produce radiation over a wide range of wavelengths, from radio to X-rays.

As the supernova expands, the shell of interstellar matter also exerts a backward pressure on the matter being ejected more slowly from the star. This pressure drives what is called a reverse shock wave. We encounter reverse waves when driving in rush hour traffic on the highway: A vehicle far ahead of us may slam on the brakes to avoid a road hazard. The next vehicle in the lane will brake to avoid a collision, and so on, sending a wave of braking and brake lights moving back down the lane. In a similar way, the reverse shock wave sweeps through the stellar ejecta and heats it to millions of degrees.

With Chandra, it has become possible to observe both the initial shock wave and the material heated by the reverse shock wave. Chandra’s image of the Tycho supernova remnant shows the forward shock wave outlined by the strikingly sharp blue circular arcs seen on the outer rim. The stellar debris, which has a temperature of about 10 million degrees and is visible only in X-rays, shows up as yellow, green, and red clumps of turbulent gas. No central point source has been detected, which indicates the Tycho supernova was likely the detonation of a white dwarf that was completely destroyed in the explosion.

The most graphic evidence for the existence of dark matter comes from Chandra observations that use a technique called gravitational lensing: when dense matter causes the nearby space to warp so light from background galaxies can be seen bending around it. This image of the Bullet Cluster shows hot, X-ray-producing gas as pink and optical light from stars as orange and white. The X-rays show that the Bullet Cluster is composed of two smaller clusters of galaxies colliding at high speeds in one of the most energetic events ever observed. Using gravitational lensing, astronomers have discovered that the heaviest mass concentrations in the clusters, shown in blue, are separate from the mass concentration of the hot gas. Scientists have interpreted the image to explain that as the blue clusters collided, the pink hot gas was slowed, but the dark matter kept on traveling because it interacts weakly, if at all, with itself or the gas except through gravity. The clusters of dark matter passed through one another like ghosts and moved beyond the hot gas.

Although such violent collisions between clusters are rare, Chandra’s observations of a half-dozen other clusters have shown results similar to the Bullet Cluster. Calculating the mass of dark matter compared to that of regular matter in these findings makes it very difficult to avoid the conclusion that most matter in the universe is dark. 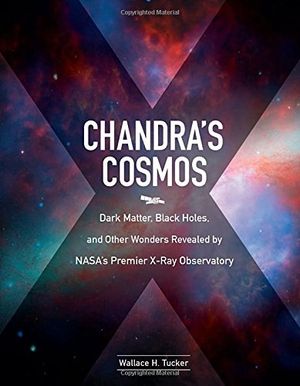 Wallace H. Tucker is the science spokesperson for the Smithsonian Astrophysical Observatory’s Chandra X-Ray Center. He is the author of numerous papers and seven books.