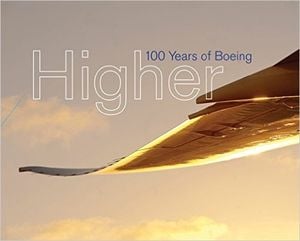 In this lavishly illustrated book, published to coincide with Boeing's 100th anniversary, Pulitzer Prize–nominated author Russ Banham recounts the tale of a company and an industry like no other—one that has put men on the moon, defended the free world, and changed the way we live.

One hundred years after Bill Boeing and George Westervelt built a canvas-and-wood seaplane in a Seattle boathouse, the name Boeing has become synonymous with flight. Starting with the company’s first major contract—an order from the U.S. Navy for 50 seaplane trainers in 1917—to today’s $6.5 million contract from DARPA for Phase 1B of the XS-1 reusable experimental spaceplane, Boeing has been a pioneer in every field of aerospace. To celebrate the company’s 100th anniversary, Russ Banham has written Higher (Chronicle Books, 2015), a book outlining the company’s successes, as well as its setbacks.

In its first 50 years, Boeing went from building open-cockpit biplanes to creating an unmanned spacecraft that could circle the moon and take photographs of Earth. We can’t wait to see what the next century brings.