This fall we present our annual list of the best children’s and young adult books published in 2021 on the topics of flying and space exploration. This holiday season delight young readers with tales of a young Edwin Hubble, Neil Armstrong’s moon rock, and incredible pop-up books that are out of this world. Our selection includes titles for all ages, from those just learning to read to teens. 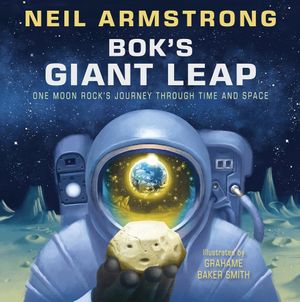 Written by Neil Armstrong; illustrated by Grahame Baker-Smith. Crown; $17.99; 48 pages. In 2006, NASA named Neil Armstrong an Ambassador Explorer, and presented him with a small fragment of a rock he’d brought back to Earth from the moon in 1969. During Armstrong’s acceptance speech he dubbed the fragment “Bok,” and described all the things Bok must have witnessed over billions of years. This charming book, adapted from that speech, combines Baker-Smith’s lush illustrations with a story sure to charm readers. The story starts with the celestial fender-bender that produced the moon, and continues with Bok—a piece of basalt that broke off from a larger rock—being hit by an asteroid, something that took him “about half a billion years to get over.” As he cycles between sleeping and gazing at the Earth, Bok endures as continents form on Earth, dinosaurs roam, and Neil Armstrong is born. He’s jostled from a nap as Armstrong throws him into a box “with some acquaintances he knew only slightly,” returning to Earth with the crew of Apollo 11. An appendix includes additional information about the moon, Earth, and Armstrong. Ages 4 to 8. 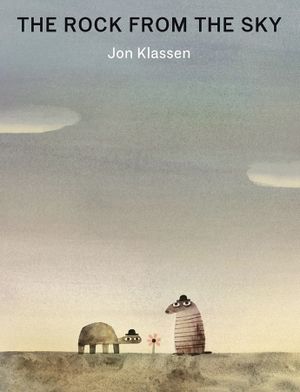 The Rock From the Sky

Written and illustrated by Jon Klassen. Candlewick; $18.99; 96 pages. A stubborn, bowler-hat-wearing tortoise stands under a gloomy sky next to a hopeful pink flower. I like standing in this spot. It is my favorite place to stand. I don’t ever want to stand anywhere else, he says. But things are about to get dicey: a meteor is hurtling toward his exact location. Will the tortoise be crushed to smithereens, or will he heed the advice of his (also bowler-hat-wearing) armadillo-mole-hybrid friend who has a bad feeling, and scoot over? Five wonderful chapters of dark hilarity from Caldecott Medalist Klassen. Ages 4 to 8. 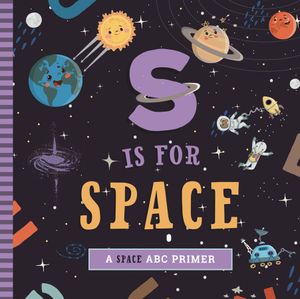 S is for Space

Written by Ashley Mireles; illustrated by Volha Kaliaha. Familius Books; $8.99; 20 pages. The very youngest readers can learn their ABCs by blasting off into space with this sturdy board book. As they head into the cosmos, little readers learn that A is for astronaut / B is for Black Hole / C is for constellation...all the way to Z is for zenith. Simple illustrations featuring the smiling faces of anthropomorphized planets introduce new readers to outer space. Ages 0 to 4. 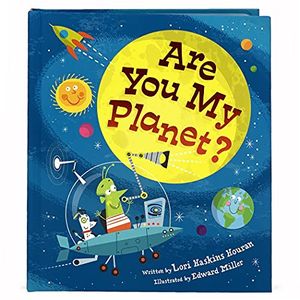 Are You My Planet?

Written by Lori Haskins Houran; illustrated by Edward Miller. Cottage Door Press; $10.99; 32 pages. Space alien Beep is lost, and he and his Dalmatian-looking puppy are wandering through the Solar System looking for their home. Is it the biggest planet? The hottest? Does it have rings? Or spin on its side? The littlest readers can follow along as Beep searches for his “small and red and beautiful” planet, while those slightly older can learn the planetary fact presented on each page of this nifty board book. Ages 2 to 6. 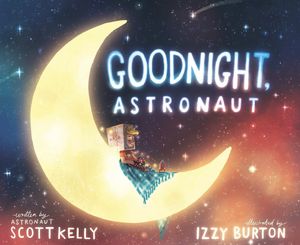 Written by Scott Kelly with Emily Easton; illustrated by Izzy Burton. Crown; $17.99; 40 pages. To quiet her rambunctious twin boys, Patricia Kelly would gently urge them toward sleep by saying, “If you close your eyes and dare to dream, you can go anywhere. You can do anything.” Future Space Shuttle astronaut Scott Kelly took her words to heart, and his motto “If we dream it, we can do it,” is the subject of this tale highlighting the many places Kelly has slept and dreamed of the future. Whether sleeping in his childhood bedroom, or camping in his backyard treehouse, or power-napping in an F-14 on an aircraft carrier flight deck, Kelly gets closer and closer to his dream of space exploration. A scrapbook of photos of just some of the places Kelly has slept—on planet and off—wraps up the story. Burton’s jewel-colored illustrations enhance the book’s sleepy feel. Ages 3 to 7. 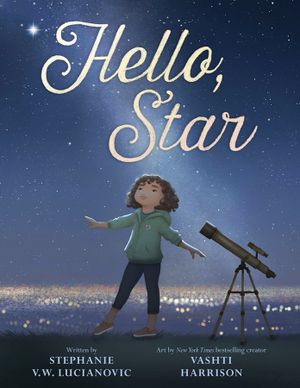 Written by Stephanie V.W. Lucianovic; illustrated by Vashti Harrison. Little, Brown Books for Young Readers; $17.99; 40 pages. When an unnamed little girl learns that the bright light she sees in the night sky is coming from a dying star, she vows to keep it company until it blinks out. Over the years she learns everything she can about planets, eventually becoming an astronaut. And each evening she tells “her” star to hold on a little longer. When she finally makes it to the moon, our young astronaut is there when her tired blue friend reaches the end. A lovely lesson in empathy. Harrison’s color pencil illustrations are exquisite, making this title a standout. Ages 4 to 8. 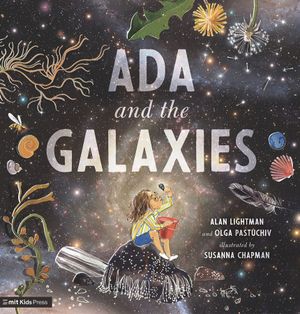 Ada and the Galaxies

Written by Alan Lightman and Olga Pastuchiv; illustrated by Susanna Chapman. MIT Kids Press; $17.99; 40 pages. A summer day offers myriad pleasures to young Ada, who is visiting her grandparents’ Maine island house. As Ada waits impatiently for nightfall—she adores stargazing above anything else—she passes the time by watching an osprey’s nest, kayaking, and playing on the beach. Will an early fog cancel the evening’s plans? Susanna Chapman’s lush watercolors perfectly complement the story by theoretical physicist Alan Lightman and co-author Olga Pastuchiv. Plenty of details on each page—shells, nebula, a fog-obscured cabin—will entice young readers to linger. Ages 4 to 6. 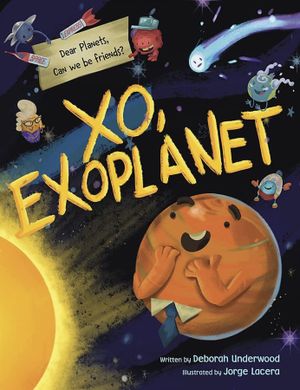 Written by Deborah Underwood; illustrated by Jorge Lacera. Little, Brown Books for Young Readers; $17.99; 40 pages. As the planets circle the sun, they suddenly spot something new outside the Solar System. Going completely old-school they send the unidentified object a letter, and a correspondence begins. Mercury, Venus, and the others label the object an exoplanet, but is it? The unidentified object considers them the exoplanets and takes offense at the letter’s salutation. Maybe it’s all just a matter of perspective. An imaginative way to consider other points of view. Ages 4 to 8. 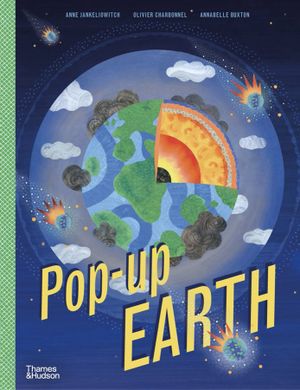 Written by Anne Jankeliowitch; illustrated by Annabelle Buxton; paper engineering by Olivier Charonnel. Thames & Hudson; $29.95; 20 pages. You don’t have to leave our home planet to see wonders, as evidenced by this dazzling pop-up book. Incorporating spectacular paper engineering, the book introduces the Earth’s different ecosystems—taking readers into Earth’s fiery core, up into its atmosphere, and deep into the oceans—and explains how all living things are connected. Each pop-up page—and alternating 2D spreads—covers a complete topic, allowing children to spend as much time as they want discovering the inner workings of the planet. Ages 6-up. 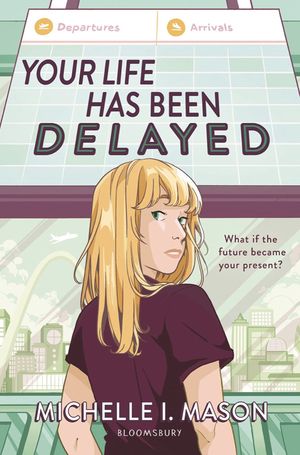 Your Life Has Been Delayed

Written by Michelle I. Mason. Bloomsbury; $17.99; 374 pages. In August 1995, as 17-year-old Jenny boards her flight from New York heading home to St. Louis, she’s thinking only of her potential boyfriend and the possibility of attending Columbia University once she graduates from high school. When the plane lands three hours later, Jenny and the other passengers are told their flight disappeared—25 years ago. In Jenny’s new world—now 2020—three of her grandparents are dead, her best friend is now 42 years old, and she’s overwhelmed trying to navigate a world dominated by social media and smartphones. Jenny and the other passengers are also the target of a growing group of ever-more-violent conspiracy theorists who think the government is somehow involved in the plane’s mysterious reappearance. Ages 12-up. 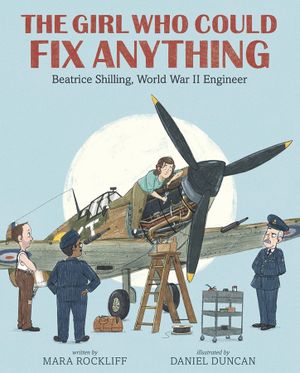 The Girl Who Could Fix Anything: Beatrice Shilling, World War II Engineer

Written by Mara Rockliff; illustrated by Daniel Duncan. Candlewick Press; $17.99; 48 pages. As a child, Beatrice Shilling loved all things mechanical, and preferred to spend her allowance on tools rather than candy. By age 14, she had her own motorcycle, and worked as an apprentice engineer, bringing electricity to rural English villages. Encouraged by her engineering mentor “Miss Partridge” to apply to university, Beatrice graduated with honors but, as a woman, had difficulty finding a position. Eventually hired by the Royal Aircraft Establishment to write handbooks about aircraft engines, Beatrice learned that Spitfire and Hurricane pilots were having trouble with sputtering engines. She identified the fuel-line problem, and suggested an inexpensive fix that was easy to manufacture during wartime. Shilling’s is a fantastic story, engagingly told, and perfectly complimented by Duncan’s illustrations. A three-page author’s note provides more information about Shilling, along with a bibliography. Ages 5 to 9. 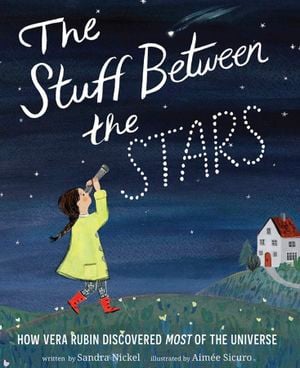 The Stuff Between the Stars: How Vera Rubin Discovered Most of the Universe

Written by Sandra Nickel; illustrated by Aimée Sicuro. Harry N. Abrams Books, $18.99; 48 pages. As she watched the night sky from her bedroom window, Vera Rubin determined to be an astronomer when she grew up. As Vera’s career progressed, her work was dismissed by her male colleagues as “outlandish” and “ridiculous.” So Vera started studying not only faraway galaxies no one else found of interest, but also the mysteries between the stars. She would transform the discipline of astronomy with her investigations into dark matter—the stuff between the stars. This is a fine story of perseverance and personal brilliance. The retro-inspired watercolor and ink illustrations fit nicely with the 1950s-ish timeframe. An author’s note, timeline, and bibliography round out the tale of an exceptional scientist. Ages 6 to 9. 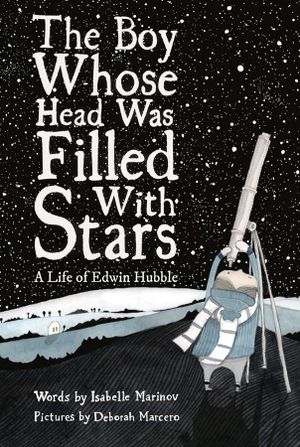 The Boy Whose Head Was Filled With Stars: A Life of Edwin Hubble

Written by Isabelle Marinov; illustrated by Deborah Marcero. Enchanted Lion Books; $17.95; 52 pages. As a child in Missouri, Edwin Hubble would sit alone outside at night looking up at the stars, and wonder: How many stars are in the sky? How did the universe begin? Where did it come from? In 1897, on his eighth birthday, Edwin received a wonderful gift: a telescope built by his grandfather. Although Edwin loved astronomy, his father insisted he study law; after finishing his degree, Edwin became a high school teacher and basketball coach in Indiana. It wasn’t until 1914, after his father’s death, that Edwin returned to astronomy, eventually making astonishing discoveries: He would identify that the Andromeda nebula was a separate galaxy, and later, he would discover that the universe was expanding. In 1990, in honor of these discoveries and more, the Hubble Space Telescope was launched into orbit. Macero’s impressive illustrations emphasize the vastness of space; back matter—including author and illustrator notes—introduce young sky-watchers to young Edwin and the questions that beguiled him. Ages 7 to 10. Written by Anne Jankeliowitch; Illustrated by Annabelle Buston; paper engineering by Olivier Charbonnel. Thames & Hudson; $29.95; 18 pages. Where did the moon come from? Why does it appear to change shape? Does the moon really affect Earth’s oceans? These questions and more are answered in another beautifully produced book by Thames & Hudson. Cleverly designed pop-ups start with the moon’s origin and conclude with the 1969 Apollo 11 mission, when Neil Armstrong and Buzz Aldrin became the first people to walk on the lunar surface. Ages. 6-up. 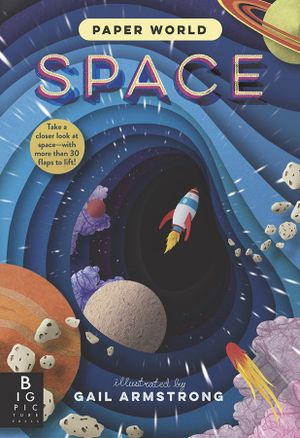 Written by the Templar Company; illustrated by Gail Armstrong. Big Picture Press; $24.99; 30 pages. Lift-the-flap books are always popular, and this oversize book features more than 30. The journey starts by defining what astronomers do, and how best to see stars (away from light pollution), before introducing young readers to the planets in our solar system and their locations. A gorgeous spread covers the sun (“It is so huge that more than one million Earths could fit inside it!”), while additional pages introduce various types of stars and galaxies, space stations, and a future Mars base. A glossary concludes the book. Ages 8 to 12.