When your debut novel becomes a no. 1 bestseller and a Hollywood blockbuster, there’s really no getting around having your second work struggle to live up to it. Artemis, though, struggles more strenuously than anticipated.

Andy Weir’s latest story sets up a fascinating and scientifically believable space environment—this time, the first lunar colony. The city of Artemis is built for tourists, who enjoy the one-sixth gravity and swank amenities before exploring the Apollo 11 landing site. Artemis needs a permanent citizenry to keep the operation singing, and that’s where Jazz Bashara comes in. She’s a low-wage porter who’s always got an eye out for a get-rich-quick scheme, and easily signs on to commit some domestic terrorism for one of the few bigwigs living on Artemis.

Like The Martian’s lonely astronaut desperate to be rescued, Bashara executes some creative schemes to reach her goal, except this time it’s all for a bizarre heist that endangers everyone in the city. It’s difficult to get invested in the corporate takeover end game, and worst of all, it’s difficult to get invested in Bashara. Weir’s young, female, Muslim protagonist is still unusual to see in sci-fi. It’s unfortunate that in Weir’s attempts to write a sexually liberated woman, he seems to lose himself to middle-age male wish fulfillment, and ends up with a story that is so filthy at times it seems better suited to the letters section of Playboy. The zippy, action-packed scenes make Artemis, like The Martian, a quick read, and this time that’s probably for the best. 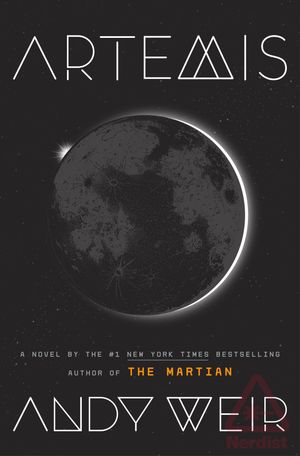