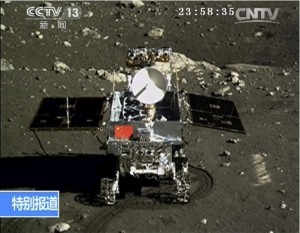 The Yutu rover on the Moon.

The Chang’E 3 spacecraft, carrying the Yutu (Jade Rabbit) surface rover, successfully landed on the Moon yesterday. Despite pre-mission announcements about a planned landing in the “Bay of Rainbows” (Sinus Iridum in the approved Latin nomenclature of the Moon), the spacecraft actually set down in the northern region of the “Sea of Rains” (Mare Imbrium), the far eastern edge of its designated landing box. Whether by design or fortuitous accident, this site is actually more interesting geologically than the spacecraft’s original destination.

Two major terrain types dominate the Moon’s geology. The bright, rugged highlands date from the time of crustal formation 4.5 billion years ago and were intensely cratered during the first 600 million years of lunar history. The younger areas are the dark, smooth maria, made up of iron-rich lava flows. These lavas began to erupt after the end of the heavy bombardment of the cratered highlands 3.9 billion years ago and continued sporadically for another billion years. The exact date of cessation of this volcanism is unknown and in fact, is relevant to the geology of the Chang’E 3 landing site. 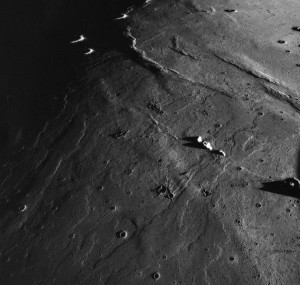 Flow lobes in the lavas of Mare Imbrium. Chang'E 3 landed at the extreme northern end of this sequence of lavas, which are very young in lunar terms. Apollo 15 metric image.

The lavas of Mare Imbrium contain some of the most magnificent lava flow fronts seen on the Moon. These flow fronts are actually visible in the best telescopic pictures taken from Earth, but are best seen in images taken from lunar orbit. An overlapping sequence of flows were created by lava erupting from a small vent area over 700 km south of the Chang’E 3 landing site. These lavas then flowed northward into the central Imbrium basin. Measurements of the thicknesses and lengths of these flows indicate the effusion of massive amounts of very low viscosity lava, liquids much runnier than typical terrestrial basaltic lavas. Estimates suggest that the lunar lavas had the viscosity of motor oil at room temperature. The term “flood lava” is entirely appropriate in this case as the eruption must have been a veritable torrent of fast moving, molten rock.

After lunar lava flows erupt and their surfaces are exposed to space, they begin to accumulate impact craters. We estimate the age of these flows by measuring the density (number per unit area) of impact craters on them and then compare those measured densities to the density of craters on lava flows from which we have collected samples (four of the six Apollo landing sites and two of the three Russian Luna sites). From this information, we estimate the age of the late Imbrium flows to be between 1 and 2.5 billion years old, which is significantly younger than all of the returned lunar samples, which date from 3.1 to 3.8 billion years ago. Although still very old by terrestrial standards, these are some of the youngest lavas on the Moon. Because rates of erosion on the Moon are extremely low, young lava flows still preserve much of their original morphology and this effect may partly account for the preservation of the flow fronts seen in orbital images.

Because these lava flows are so young, the regolith (ground-up, fragmental surface layer of the lava flow – the lunar “soil”) is only a couple of meters thick. This value is relatively thin when compared with the thickness of the regolith at the Apollo sites (which ranged from 3-4 meters at the young Apollo 12 site up to over 6-8 meters at the old Apollo 11 landing site). A consequence of a thin regolith is that because the bedrock is close to the surface, small craters can excavate rocks from beneath the soil. This probably accounts for the blocky nature of the Chang’E 3 landing site; many large rocks are seen in the descent images and a blocky rim crater is evident in the first pan images retuned from the lander (image above at beginning of this post). As this crater appears to be about 10-12 m in diameter and has clearly dug through the regolith into bedrock, we can infer a regolith thickness here on the order of 2-3 meters. 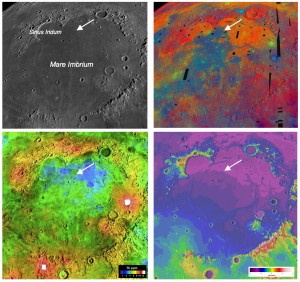 The Imbrium lavas are not only remarkable for their physical properties but are also compositionally interesting. They show a very “blue” color in spectral images obtained from Earth, and from Clementine and other spacecraft. (Note that “blue” in this sense actually means “less red than normal” – all lunar colors are reddish brown.) The color of the mare flows has been correlated with lava composition; blue mare basalts are mapped where very high-titanium basalts have been collected. Thus, it is reasonable to infer that the mare lavas of the Chang’E 3 site are rich in titanium. In addition, this portion of the Moon is anomalously rich in the radioactive element thorium (Th). Thorium is a trace element that tends to remain in the liquid portion of a magma undergoing crystallization. Thus, high concentrations of Th indicate the presence of a component that is “late stage,” i.e., one that forms during the last phases of cooling and solidification.

In this case, the Th appears to be carried by the lava itself, a somewhat surprising result, as usually such enrichment in Th would not be expected in mafic (iron-rich) basaltic lava. This unusual chemistry is probably the result of special circumstances; the lavas here erupted through a highland crust greatly enriched in the component called KREEP, for potassium (K), the rare earth elements (REE) and phosphorus (P). On the Moon, KREEP is associated with the final phases of crustal formation and is a key substance for our understanding of the formation and evolution of the lunar crust. The KREEP component in the lavas was probably accomplished through a process called assimilation (where substances with low melting points get melted and included in hot magmas rising to the surface, which partly melt the surrounding rocks). The Chang’E 3 site appears to include lavas with that history.

One of the experiments aboard the Yutu rover is a ground-penetrating radar (GPR). This instrument beams radio waves into the surface and listens to echoes off subsurface reflectors (which can be physical or compositional boundaries). A key thing to look for at this site is evidence for the bedrock/regolith contact (depth of a couple to a few meters), possible contacts between lava flows (depths of a few to tens of meters), and contact of the mare lava fill with the basin floor (depths of hundreds of meters). In addition, this site is near one of the famous mare wrinkle ridges, those warping structures that deform the smooth mare surface inside basins. These ridges can be quite complex, involving multiple faults, tearing, scissoring and grinding as rocks fail and deform under the forces of regional compression. The GPR profiles may capture this complexity if the rover drives over a ridge during its traverse.

The Yutu rover contains both a spectral imager and an alpha-particle X-ray spectrometer. These instruments will measure the surface mineral and elemental composition for both rocks and soils. Because the rover will examine several different individual areas during its traverse, we will obtain new “ground truth” data to better understand the meaning of data obtained remotely from orbit. At a minimum, Yutu will examine the composition of the surface lava flow, which (judging from Clementine color data) appear to be very-high titanium (VHT) basalts. But because the rover has the ability to approach and examine the ejecta of large craters, we may be able to study rocks excavated from below the surface flows. Lavas to the north of the landing site are “red” in spectral images, suggesting a lower titanium content, and these lavas presumably underlie the local VHT basalts. With data from the rover, we might be able to reconstruct the volcanic stratigraphy of this region of the Moon.

Thus we are poised to investigate a new site on the Moon of considerable interest and complexity, one that displays a variety of geological units and processes. The Chang’E 3 lander and Yutu rover can provide many answers to our questions regarding the geological history of this region of the Moon and about lunar history in general. That will be a lot to learn over 3 lunar days (one lunar day equals 14 Earth days of light, sandwiched between 14 days of dark).