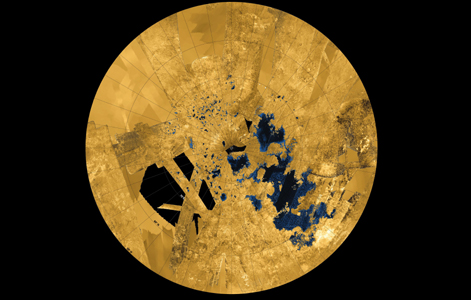 Stunning new maps of the lakes on Saturn’s moon Titan were revealed at last week’s American Geophysical Union meeting in San Francisco by Randy Kirk of the U.S. Geological Survey. Ligeia Mare, one of the largest of the hydrocarbon lakes on Titan, is much deeper than originally thought, holding about twice the volume of Lake Michigan. A new radar survey by the Saturn-orbiting Cassini spacecraft showed a depth of about 160-170 meters, compared to previous estimates of about 10 meters. Also, the edges of the lake appear straight, suggesting a fracture-controlled setting, similar to Lake Superior, another lake in the American Midwest.

The liquid in Ligeia Mare is mostly methane, but the hydrocarbon mixture also contains ethane and some heavier hydrocarbon compounds, plus some nitrogen. The lake would have been the target of the Titan Mare Explorer, a proposed NASA Discovery mission with a lander to investigate the chemical composition of the hydrocarbon lake (among other objectives). Unfortunately, it was not funded.

Kraken Mare, another huge lake in the northern hemisphere of Titan, is even bigger. According to Alexander Hayes of Cornell University, all of the moon’s hydrocarbon lakes together contain 200 times more hydrocarbon compounds than are in all proven oil reserves on Earth. But don’t expect cargo ships transporting oil from Titan to Earth any time soon. Titan’s surface is extremely cold (about -180 C/ -300 F) and far away, about 9.5 times the distance from the Earth to the Sun or about 900 million miles).

Saturn’s largest moon intrigues us because of the similarities it has to our early Earth, especially in regard to its atmospheric composition—nitrogen and methane. Since life seems to have originated under a similar atmosphere on Earth, could it have originated on Titan as well? The thick atmosphere on Titan would enable an instrument-loaded balloon to float through the haze to answer this question, as proposed in the Titan Saturn System Mission. TSSM was another mission that came close to being funded, but never got the final go-ahead.

Nowhere else in our Solar System, other than Earth, do stable liquids exist on a planetary surface. Thus, these lakes remain among the most interesting places to study, especially if we entertain the possibility of “weird” life on Titan that uses hydrocarbons rather than water as a solvent. The bottom of these lakes would be an ideal place to look for this type of alien biology, especially if they are heated geothermally from below.