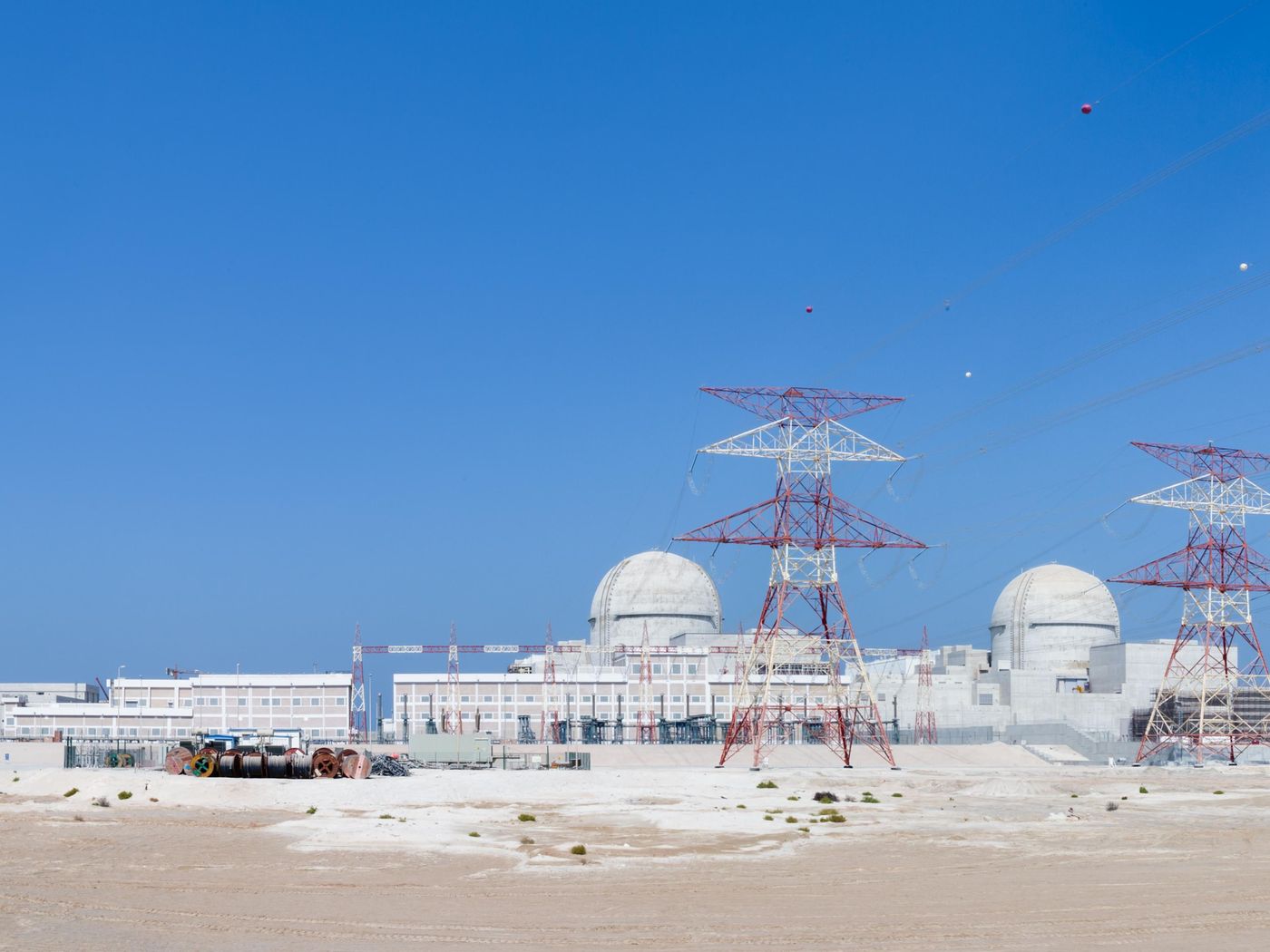 Three hours west of Abu Dhabi on a remote stretch of land by the Arabian Gulf, cranes are busy at work on a project more ambitious and larger in scale than Burj Khalifa in Dubai. Requiring three times as much concrete and six times as much steel as the world’s tallest building, the Barakah Nuclear Energy Plant will bring its first nuclear reactor online early this year. With plans to be fully operational by 2020, the four-reactor plant is one of the world’s most significant new investments in nuclear energy and represents the first peaceful civilian nuclear program in the Middle East.

The opening comes just ten years after the UAE announced its intention to develop a nuclear energy sector, part of a massive plan to transform and diversify the UAE’s energy economy to lessen reliance on fossil fuels. In December 2009, Emirates Nuclear Energy Corporation (ENEC) awarded Korea Electric Power Corporation (KEPCO) a $20 billion bid to build the Barakah plant. That same month, the UAE and the United States entered into a bilateral agreement for nuclear cooperation. Construction began in July 2012.

Regionally, the UAE has positioned itself as a role model in the nuclear field through its commitment to international standards of nonproliferation safety and security. In fact, the UAE’s nuclear cooperation with the U.S. has been called the “gold standard” by government leaders and nonproliferation experts for its commitment to safety, security and operational transparency.

“This is a pioneering attempt to use the latest technologies available on the world market to build and operate one of the most sophisticated, most advanced nuclear energy facilities anywhere in the world," says Danny Sebright, President of the U.S.-UAE Business Council.

The investment in nuclear energy will help the UAE to develop more diversified and environmentally friendly energy solutions for both domestic use and foreign distribution. Currently, fossil fuels supply almost all of the UAE’s energy demand, but UAE leaders are looking ahead and planning for environmental and economic sustainability over the long term. Last January, the UAE announced its first national energy strategy and intention for clean energy to make up fifty percent of the energy mix—nuclear will contribute six percent—by 2050. The UAE also plans to reduce cardon dioxide emissions by 70 percent.

In a keynote speech at the 2015 World Government Summit in Dubai, His Highness Mohammed bin Zayed Al Nahyan, Crown Prince of Abu Dhabi, described this energy transition with optimism. “The question is, 50 years from now after we have loaded this last barrel of oil, are we going to feel sad? If our investment today is right, I think—dear brothers and sisters—we will celebrate that.”

As the country’s industries and population continue to grow, electricity demand is increasing at an annual rate of seven to ten percent, according to a 2015 report by Masdar and GE. Though the UAE has invested billions in renewable energy development – with the goal of solar, wind and other technologies contributing 44 percent of its energy mix by 2050 – renewables alone won’t meet future energy demands.

At full capacity in 2020, the four civilian nuclear reactors will produce nearly zero carbon emissions and provide up to 25 percent of the UAE’s energy needs. According to ENEC, one uranium pellet the size of an adult’s fingernails produces the same amount of energy as 474 liters of oil.

To meet the demand for new engineers, scientists and mathematicians, ENEC is investing heavily in education programs to carry the sector into the future. Through the Energy Pioneers Program and the UAE Nuclear Energy Scholarship Program, ENEC has partnered with Khalifa University, the Federal Authority for Nuclear Regulation and Abu Dhabi Polytechnic, in addition to many leading academic institutions in the U.S. and across the globe, to provide students with world-class nuclear qualifications.

“We recognize that people are our greatest asset,” says ENEC CEO Mohamed Al Hammadi in his message from the CEO. “As we work towards operations, we are actively training and developing talented Emiratis who will ensure the safe and successful operations of our plants.”

Careful consideration was also given to the plant’s location. Among other qualities, the site has been tectonically inactive for over 100 million years and has no history of tsunamis. “The Barakah site was selected after a 12-month long analysis,” says Maryam Qasem, Head of Nuclear Fuel Fabrication at ENEC. “The analysis looked into the different environmental factors, the seismic history, the security and the distance from populated areas.”

While establishing a new sector poses its share of challenges, robust governance has supported ENEC through the process, says Al Hammadi. “Along the way, we have faced numerous challenges and obstacles. What helped us in overcoming these is that the UAE took sufficient time to develop and establish the right infrastructure prior to launching the program.”

International counsel has also been key to ENEC’s success. On a semi-annual basis, an advisory board comprised of world-renowned nuclear experts meets in the UAE to review the program’s adherence to international standards. “We’re very proud of the industrial support that we’ve been getting, which has been helping us to develop our own capabilities,” says Qasem. "Everything we've been doing, we're [benchmarking with] international organizations."

ENEC's Al Hammadi is proud of the contribution that his organization and the Barakah plant will have in helping the UAE to achieve its energy goals. “Nuclear energy has an important role to play in our nation’s future," he adds in his message. “Energy is essential to drive growth in a rapidly growing economy like ours. Nuclear energy provides the UAE with the opportunity to develop a safe, clean, reliable and efficient source of electricity, while diversifying our energy portfolio and helping to ensure a secure and sustainable energy future.”