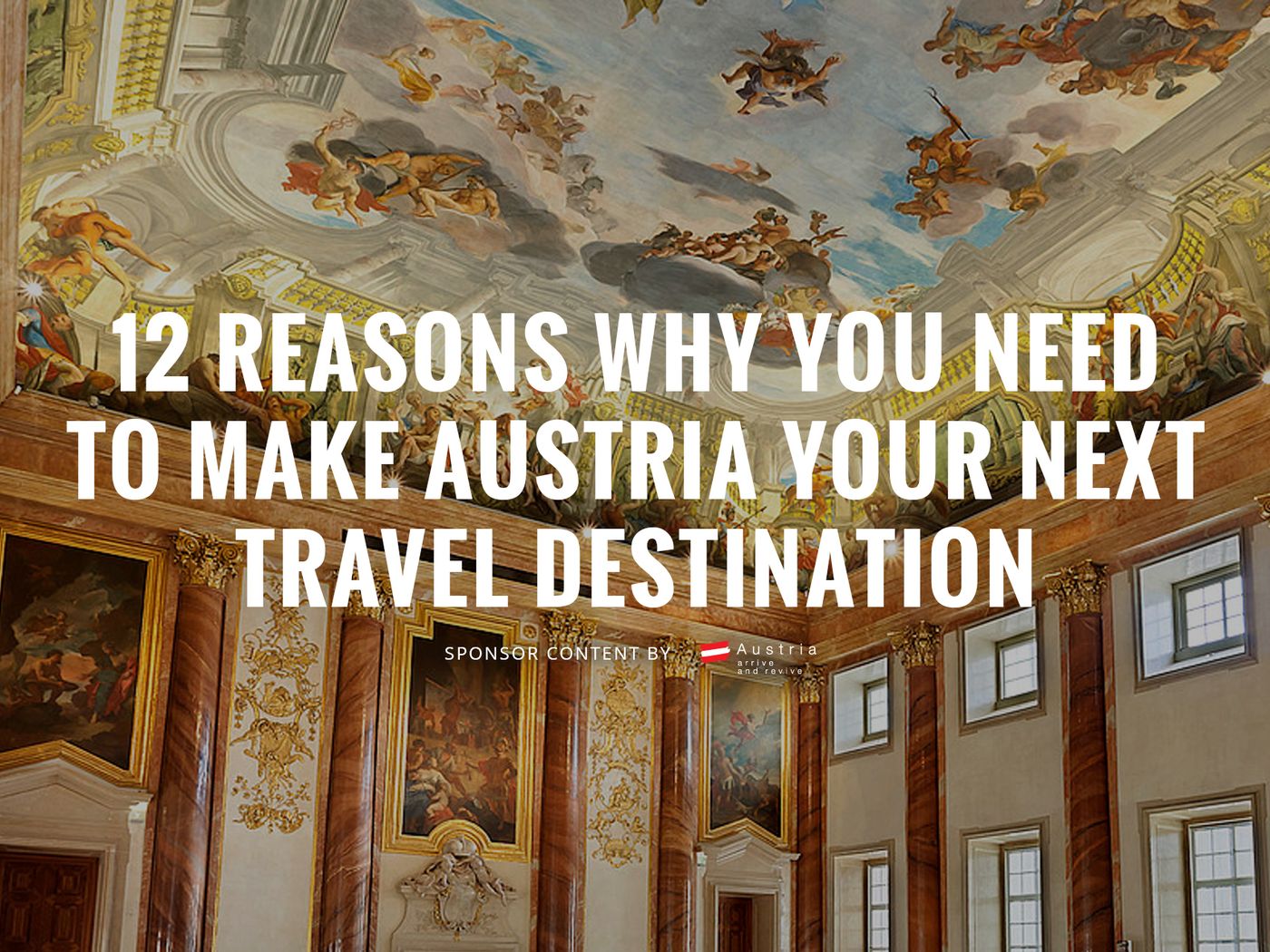 Everywhere you turn in Austria, history comes alive. Walking through glimmering rows of weapons in the 17th-century Graz armory, you can almost see Styrian lords leading their troops on horseback against invaders. Inside the Salzburg Cathedral, Mozart’s hands still float across the organ, and Habsburg rulers seem to stare at you from the portrait hall in Ambras Castle. Better yet, alongside these historical buildings are dynamic contemporary spaces, like the interactive Haus der Musik where you can "conduct" your own orchestra. Austria blends old and new seamlessly, and the result is intoxicating. From imperial palaces gilded in gold to holograms of a Mozart opera, here are 12 reasons why you need to make Austria your next travel destination.

Housed in a palatial building right on the Ringstrasse, the Kunsthistorisches Museum Vienna is home to 2,100 objets d’art collected and commissioned by the Habsburgs. Spanning more than a millennium, the collection includes everything from Cellini’s celebrated saltcellar to automans. See the world’s largest collection of paintings by Pieter Bruegel the Elder in the Picture Gallery, and marvel at frescoes by Klimt and his collective above the grand staircase. Between galleries, sit down for a coffee and pastry at Cupola Café, or make a dinner reservation on Thursday night and explore the museum after hours.

Admission to the Kunsthistorisches Museum Vienna includes two outposts: the Neue Burg, a collection of historic arms and armor at the Imperial Palace, and the Imperial Carriage Museum Vienna at Schönbrunn Palace, which holds collections that would put Cinderella’s carriage to shame.

2) Tour iconic locations of The Sound of Music around Salzburg

Salzburg and The Sound of Music are inextricably linked, and fans will be happy to know that many of the locations that appear in the film can be visited today. Spend the night in Leopoldskorn Palace, the von Trapp family’s fictional residence, then set out on foot in the morning to Mirabell Gardens, where Maria and the children sang “Do-Re-Mi.” Afterwards, pass by St. Peter’s Cemetery where the family hid behind tombstones and walk up to the gate of Nonnberg Abbey. In the afternoon, hop on a bus tour of the city and Lake District, where you’ll pass the site of the famous “The Hills are Alive” scene. To end your day, at The Sound of Salzburg Dinner Show, and enjoy performances from the film score after the meal.

For a fun guided tour, join Fräulein Maria’s Bicycle Tour, which takes you on a 3.5 hour adventure through the Trapp family’s hometown.

3) Explore the Habsburgs’ stronghold in Innsbruck

Only two of Austria’s cities can claim to be seats of Habsburg: Vienna and Innsbruck. Tirol’s capital combines its Imperial opulence with raw, alpine character. Visit the Habsburg’ Imperial Palace and Imperial Court Church, and gaze up at Emperor Maximilian I’s iconic Golden Roof. Above the 800-year-old city of Innsbruck sits the Renaissance-era Ambras Castle. The legacy of one of the Habsburg’s foremost art collectors, Archduke Ferdinand II, it is the only collection of Habsburg curiosities preserved at its original location. Walk through the lavish Spanish Hall, adorned with 27 full-figure portraits of Tirolean Habsburg rulers, and check out rare examples of armor in their original 16th-century showcases. Keep an eye out for the bathing chambers of the Archduke’s secret wife and the only existing portrait of Vlad Dracula.

4) Visit the world's largest armory in the city of Graz

Back in the 17th century, the city of Graz was subject to frequent attacks by neighboring territories. Styrian lords were forced to organize massive armies in response, and the Armory Graz was born. Today, it is the world’s largest original armory, and the collection’s 32,000 items are still stored the way they were 400 years ago. Travel back in time through endless rows of needle-sharp spears and iron armor plates on your tour, then climb the city mountain to see how the fortress helped transform Graz into a defensive stronghold.

A small alpine village with a large population of cows, Erl doesn’t seem like a place that would host one of the world’s premier classical concert and opera festivals. Yet, it is. Close to the German border, Erl saw much bloodshed during World War II. War-weary and running out of options, villagers promised to perform Passion of Christ every six years if they could be spared another battle. They were, and to honor their promise, the villagers built a venue in 1959 specifically for Passion Play performances. Some years later, the venue’s acoustics caught the attention of Salzburg conductor Gustav Kuhn, and the Tyrol Festival Erl was born. Today, the community and festival organizers maintain a close relationship, which is part of what makes this event so unique. The festival will continue its 20th anniversary celebration with a winter program from December-January, followed by a three-day piano showcase led by Kahn in April.

The prolific composer spent his childhood and early adulthood in Salzburg, and it is easy to retrace his steps. Start with breakfast at Café Tomaselli, a frequent Mozart haunt, then head to Salzburg Cathedral, where he was baptized and later served as court organist. Nearby is his birthplace, now one of two museums dedicated to him in the city. Be sure to stop through Bibliotheca Mozartiana, the world’s most extensive Mozart library with nearly 35,000 titles. In the evening, head to a concert at the Mozarteum or a performance of a Mozart Opera at the world-famous Salzburg Marionette Theater.

Owned by one of Europe’s oldest noble families, the baroque Liechtenstein City and Garden Palaces are only open to the public twice a month. Be sure to schedule your tours ahead of time, because these are ones you don’t want to miss. In the City Palace, walk through three floors of lavishly decorated staterooms featuring Biedermeier furniture, massive chandeliers, silk hangings, Rococo Revival interiors and gold embellishments. Inspired by the lush imagery of classical Italian art, the Garden Palace is an equally impressive sight. Here, admire some of the city’s finest baroque stuccowork, wander through magnificent gardens and visit the Princely Library, a grand, wood-paneled room holding 100,000 volumes from the 15th through 19th centuries.

If one store were to embody Austrian craftsmanship, it would be Mühlbauer Hats in Vienna. The Mühlbauer family has been making hats by hand for over a century. Channeling traditional Austrian dress with a modern twist, the hats have attracted a huge international and celebrity following. When you buy a hat, you join the ranks of stylish clientele such as Brad Pitt, Meryl Streep, Madonna and Yoko Ono.

9) Step into the world’s sparkliest experience

At the turn of the 20th century, Daniel Swarovski founded his crystal-cutting company in the small Tyrolean town of Wattens. His fame grew exponentially in the years that followed, and on the company’s 100th anniversary, Swarovski Crystal World opened nearby. Part museum, part theme park and part art installation, it has attracted millions from around the world. Behold an 800,000-crystal cloud sculpture hovering over a black mirror pool in the garden, and drool over the selection of Swarovski products at the company’s flagship store.

10) Enjoy world-class skiing and art, at the same time in Arlberg

At 1800 meters above sea level, the Arlberg1800 Resort sits in the tiny alpine village of St. Christoph, surrounded by jaw-dropping mountain scenery. In the summer, hikers take to the wildflower-dotted trails, and in winter, skiers flock to the pistes of the world-renowned St. Anton ski area.

In addition to stunning rooms and chalets, the resort features the Arlberg1800 Contemporary Art and Concert Hall, the highest arts center in the Alps. Listen to the sweet notes of a Steinway Grand Piano in a sleek 200-seat concert hall after a day on the slopes, or discover the work of emerging contemporary artists in the underground art gallery. As a bonus, guests can meet featured artists as part of the resort’s summer artist-in-residence program.

Set in the historical palace of Archduke Karl in the old city center, Vienna’s Haus der Musik is a dynamic, interactive exploration of music. Take up your electric baton and test out your conducting skills in front of the Vienna Philharmonic at the Virtual Conductor exhibit, step onto the Virto|stage and use movement to influence the projections around you, or play ensemble music with friends and family on movement-sensitive staircase steps. Be sure to stop in to the exhibition rooms celebrating the 150th anniversary of Johann Strauss’ iconic “Beautiful Blue Danube” and the 175th anniversary of the Vienna and New York Philharmonics.

Just steps from Vienna’s St. Stephens Cathedral is Mozarthaus, where Mozart and his family lived from 1784-1787. On your tour, see where the composer wrote his famous opera “The Marriage of Figaro” and learn about his Vienna years in the context of 18th-century society and culture. Highlights include a musical clock made around 1790, which plays a variation of the “Andante for a Cylinder in a Small Organ” that Mozart is thought to have composed for the clock, as well as a holographic performance of his opera “The Magic Flute.”

10 Ways to Awaken your Tastebuds in Austria