Without the stunning costumes that transformed human actors into robots, aliens and planetary warriors, the Star Wars universe would be far less memorable. Starting in 2015, 60 original costumes from the first six films of the series will go on view at the EMP Museum in Seattle, thanks to the Smithsonian Institution Traveling Exhibition Service (SITES). The exhibit will also travel to other museums around the nation. Embracing the universal themes of allegiance and betrayal, honor and virtue, and power and submission, visitors will be able to explore anew the visual and symbolic impact of their favorite Star Wars costumes.

But, it’s a big universe; how should fans talk about the exhibition online? #StarWars is just too vast, so to help SITES decide which hashtag to use for the exhibit, titled Rebel, Jedi, Princess, Queen: Star Wars™ and the Power of Costume, we've provided five options, in addition to the option to add your own.

The winning hashtag will be included on the walls in the exhibition so fans can speak the same language, no matter what planet they’re from. You have until December 15 to vote for your favorite and vote out once every 24 hours.

NOTE: Voting has now closed. Stay tuned for the winner.

Feel free to download the “I Voted” banners and profile pictures for your favorite social media channel. You’ll be the envy of all the Star Wars fans in your universe. 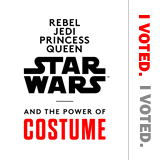 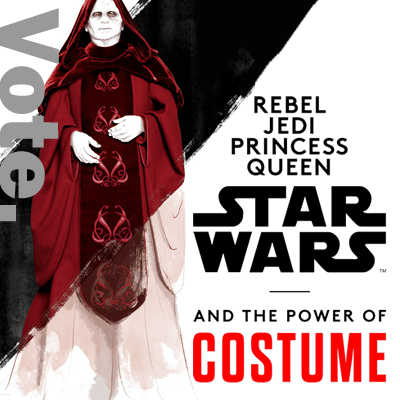 Rebel, Jedi, Princess, Queen: Star Wars™ and the Power of Costume was developed by the Smithsonian Institution Traveling Exhibition Service in partnership with the Lucas Museum of Narrative Art and in consultation with Lucasfilm Ltd. Lucasfilm, the Lucasfilm logo, Star Wars™ and all related names an indicia are trademarks of & copyright ©™2014 Lucasfilm Ltd.