Dinner at folk musician Tom Glazer's house usually ended with a singalong in the living room. In between bites of cake and sips of coffee, Glazer and his family and guests would sit in a circle of chairs around the fireplace. The folk music revival of the 1960s was in full swing, and everyone would ask Glazer to play the songs he had recorded decades earlier about the Spanish Civil War. Glazer would take out his Martin guitar and, after explaining the history behind the song, start playing.

Glazer wrote his Spanish Civil War songs in the 1930s and '40s and recorded them in the 1960s. On October 14, Smithsonian Folkways will re-release those recordings on a two-volume set of 24 tracks, entitled Songs of the Spanish Civil War. The songs feature folk legends such as Glazer and Pete Seeger and consist of traditional Spanish folk songs and original tunes.

Glazer's favorite song to perform from the collection was “Los Cuatro Generales,” about Franco and the fascist generals who led the coup against the democratic Spanish Republic between 1936 and 1939. As Glazer sang in the living room, guests would close their eyes and join in on the refrain. “There was a reverence, there was a sort of palpable change in the atmosphere when those songs got sung,” says Glazer’s son, Peter, who wrote new liner notes for the re-release. “It was a ritual.”

Talk of giving the Spanish Civil War songs new life began around 2006 when Peter Glazer was a fellow at the Smithsonian Center for Folklife and Cultural Heritage. He heard that the original Songs of the Spanish Civil War album from the 1960s was among Smithsonian Folkways’ best selling. “Clearly this music was still playing a very important role for people,” Glazer says. “It just became a very, very compelling idea to me to get this material out there in the world again.”

During the war, some 30,000 foreigners joined the fight against the fascists, including more than 2,500 Americans. Folk musicians like Tom Glazer did their part back home to spread awareness for the democratic cause. Despite all of the art to come out of the conflict, including Pablo Picasso’s Guernica and Ernest Hemingway's novel, For Whom the Bell Tolls, Franco defeated the resistance movement, thanks to the support of Hitler and Mussolini. Yet the music of Glazer and the others has continued to inspire. “People at that time had a belief that they could change things,” Peter says. “It reminds people of how important it is to believe in a cause. It reminds people how important it is to commit yourself to justice, to the possibility for change.” 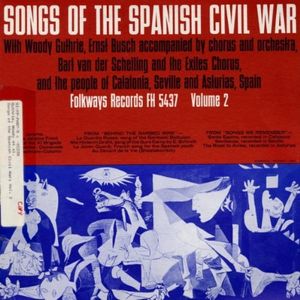