It's rough making it through the depths of winter as a squirrel. Your best bet is to make a warm nest up in a tree and spend the summer burying as many nuts as possible for later. But watch out for blue jays, who aren't above spying on your stash, then digging the seeds back up when you've left. 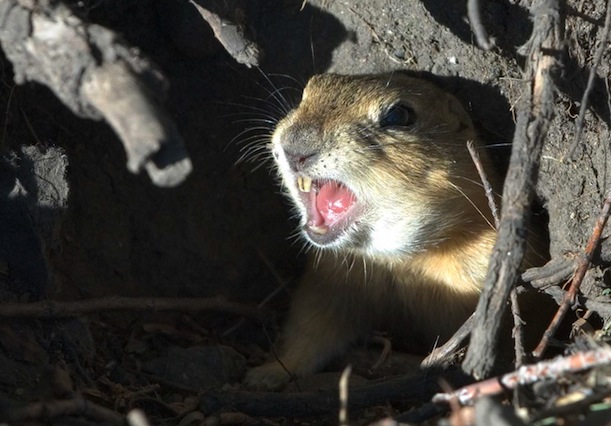 Scientists have long watched - no doubt with a mixture of amazement and pity - industrious squirrels burying their supper only to have a jay (or another squirrel) dig it right back up again. Now, in the March issue of American Naturalist, they report that squirrels aren't taking this abuse sitting down. They seem to have taken a key trait of blue jays - their incessant jabbering - and turned it against them.

Turns out that squirrels keep one ear tuned to the treetops. If they hear a volley of jay calls while they're out nut-hunting, they're less likely to waste time burying what they find. They turn from squirreling them away to wolfing them down.

The authors sum it up this way (opting for delicious vocabulary):

We conclude that through eavesdropping, squirrels assess site-specific risks of cache pilfering and alter their caching behavior to reduce the likelihood of pilferage.

To come to this conclusion, the authors set out hundreds of trays of hazelnuts (shelled and unshelled) in the woods of New York. As the resident squirrels were discovering their windfall, some of them heard the cries of blue jays echoing over their heads. Others heard the sounds of more honest neighbors such as cardinals, bluebirds, and goldfinches. (The squirrels were presumably unaware the calls were coming from a speaker lodged on a nearby tree branch.)

So what happened? Squirrels that were barraged with blue-jay calls gave up digging an average of two hazelnuts earlier than squirrels whose ears told them the coast was clear - figuring that hiding all those free nuts was just not worth all the hard work, especially out in the open under watchful eyes. Instead, they just started eating them. In animal behaviorese:

Under diminishing returns, an animal should exploit a patch until its harvest rate (H) declines to the sum of its foraging costs, which include metabolic (C), predation (P), and missed-opportunity costs (MOC); that is, the point at which H = C + P + MOC (Brown 1988).

I love painstaking field research on obscure topics like this.

But then, is it so obscure? The result, the authors point out, is a valuable reminder that communication is rarely just a two-way street. Eavesdroppers are everywhere, and yet it's amazing how freely we send out information into the air. Thinking about it helps me remain philosophical whenever I find myself on public transit, trapped on the fringe of an uncomfortably personal cell-phone conversation.