Here at The Gist we were going to try to make it through the week without saying anything about any former New York governers - because, you know, ew. But as you may have noticed, that hasn't stopped everyone else in the world. And then ace Gist-er Virginia Hughes pointed out on her own blog an interesting evolutionary-psychology angle printed in the L.A. Times. Unfortunately, author David Barash boiled down his evolutionary primer to a single, creepy shoulder shrug:

You want monogamy? Elect a swan. Or better yet, a [worm called] Diplozoon paradoxum.

Surely there had to be a way to write that article without implying that unfaithful men make better politicians. Thankfully, science writer Jennie Dusheck promptly set Barash straight in the same newspaper, just six days later. She gets in some good ones, including:

Barash makes the threadbare argument that men just can't help themselves, titillating his readers with the tattered news that male animals copulate with more than one mate...

Even Natalie Angier, in the New York Times, couldn't resist wading into the fray on Tuesday. But both these writers seemed mostly content to point out that female animals are just as capable of faking monogamy as males. Cheating is entirely unoriginal, Angier says, no matter how much time a pair spends

The ubiquity of what academics delicately call extra-pair copulation is worth pointing out. But as an argument against male randiness, it's a little like saying Clyde wasn't so bad because Bonnie was also a mean person. 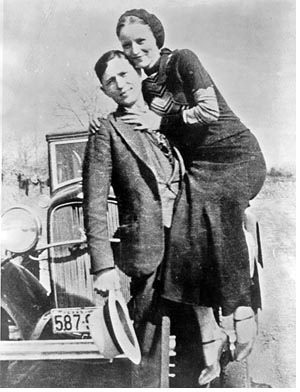 The really interesting lessons come from a bit deeper in the evolutionary textbooks. The great variety of romantic norms in the animal world stem from a few basic principles, such as how much care the kids require in order to survive. Does it take two parents working for months on end just to raise one fat, happy kid? Choose monogamy - just ask an emperor penguin. Or can a mother raise a kid or two on her own? Then she's likely to look for no more than a hasty donation of genes from a strong male of her choosing. Think elk, bighorn sheep, elephant seal. Many fish don't even bother to get acquainted, simply spewing gametes into the water and trusting to the wisdom of the currents. Kids never know either parent.

Take a still closer look, and the soap opera of the sexes gets positively bizarre. Some people may take heart in the stories of phalaropes - shorebirds whose females wear bright colors and dominate males, leaving incubation to them. Then there's the across-species relationship between relative testes size and degree of monogamy (you don't want to know where humans fall on that graph). And that's just the beginning of the field of sperm competition. It's a world nicely described (with appropriate nudges and winks) in Dr. Tatiana's Sex Advice to All Creation (now a TV show!).

If it's any consolation, all this does suggest that philandering politicians are just about as advanced as your typical weevil or prairie dog. Now about the rest of us....