Economist and journalist Tim Harford is well-known in his native England and beyond for his long-running Financial Times column, The Undercover Economist, which looks at the hidden economics concepts behind everyday items and experiences. He’s written several books of popular economics, which have been translated into 30-plus languages. His new book, 50 Inventions That Shaped the Modern Economy, will be published in the United States on August 29. We talked to Harford about his book, which includes inventions as varied as the gramophone, double-entry bookkeeping and the birth control pill.

So what made you decide to write a book looking at the modern economy through specific inventions?

I think it was a slight sense of frustration. I’m an economist, and economics often feels abstract and very impersonal, even though I don’t think it’s abstract or impersonal. As an economics writer, I’m also looking for a way to tell a good story and get some ideas across. I realized if I produced a kind of technological history with lots of ideas and examples I could teach some economics lessons through these very specific stories.

What’s your favorite invention in the book?

It varies, but right now it’s paper. I just loved the realization that there was an alternative to talking about the Gutenberg press. Obviously I have nothing but admiration for the Gutenberg press – it’s a tremendously important innovation. But everybody told me, ‘oh, you’ve doing fifty inventions that shaped the world, you must do the Gutenberg press.’ And I thought, ‘yeah, but it’s so obvious.’ Then I was looking at the Gutenberg Bible in the New York Public Library, and thinking, ‘this bible is printed on something. It’s not printed on nothing. It’s printed on a surface.’ It turns out that the Gutenberg press works perfectly well with parchment, technologically speaking, but economically speaking it doesn’t make any sense without paper. Parchment is just too expensive to produce a long print run. So as long as all you’re doing is handwriting bibles and making them look beautiful, there’s no need to use paper at all. But with paper you’ve got a mass-produced writing surface. It’s often the very cheap inventions that get overlooked, but nevertheless change the world.

Tell me about why you decided to feature IKEA’s cheap, ubiquitous Billy Bookcase – I’ve had a few of those in my life, and it never occurred to me that they were world-changing.

A lot of the innovation in the modern world is just people lowering the cost of things, figuring out how supply chains work, making better logistics, better packaging. The Billy is very easy to understand but it’s symbolic of a lot of the ways the modern world works. A lot of the reason we have so much stuff, so much material prosperity, for good and ill, is just getting the supply chain working and figuring out slightly cheaper ways to manufacture things.

Some entries are quite abstract, like ‘market research’ or ‘the welfare state’ – can you explain how you chose some of those?

The principle behind every story in the book is that there’s got to be a good story, and maybe an underappreciated one. What I liked about market research is the idea that once upon a time there was a guy who decided to do market research, and nobody had ever done it before. You have Henry Ford going ‘oh, we make cars any color you like as long as it’s black,’ and that’s really the story of the late 19th and early 20th centuries, the idea of ‘we’ll get the costs down and once they’re cheap enough people will buy them.’ And then along come the market researchers who ask, ‘maybe we should ask people what they want to buy?’ Market research figures out what we want and what we’ll buy. And then comes ever more sophisticated advertisements as well, which is an important feature of the modern economy. In the 21st century people have so much money it starts to become a full-time job for people figuring out what we want.

An abstract idea that led to a product – one of the ones I love – was the index fund. That’s because it’s the moment that an economic theory leapt off the pages and became a product. It starts with [the Nobel prize-winning economist] Paul Samuelson. He tests this idea that stock pickers can’t actually beat the market. He writes a research article and challenges the investment industry, and then an investment manager, John Bogle, reads this and says, ‘you know what, you’re probably right.’ And John Bogle sets up Vanguard [the first index mutual fund for individual investors]. And [decades later] Samuelson praises Bogle’s index fund as ranking alongside wine and cheese and the wheel.

We’re used to biologists and engineers and computer scientists and physicists inventing things, but the idea of an economist inventing something doesn’t happen very often. So I’m going to celebrate it when I can!

You included M-Pesa, a Kenyan cellphone-based money service, which is only a decade old. What makes such a new technology so impactful?

I wanted to tell a global story, not just a story about a bunch of inventors who were either white guys in Silicon Valley or white guys in the late 19th-century US, UK or Germany. In Kenya, they’ve developed this system of mobile money that basically uses text messages and is better in many ways than what we have in more developed countries. [In places like Kenya] where you don’t have the developed infrastructure, there’s no reason not to embrace it. It’s a lot harder sometimes to get things through regulatory hoops in developed countries.

Do the inventors featured in the book have anything in common? Is there an ‘inventor personality’?

One thing I do notice is there’s a good deal of tragedy. [Rudolf] Diesel [the inventor of the diesel engine] killed himself – or was murdered, though I think he probably killed himself. Fritz Haber, who invented chemical fertilizer but also chemical warfare, his wife argues with him then kills herself, and Haber, a German war hero, is ostracized by the Nazis for being Jewish, and dies alone. And there’s Thomas Midgley, who invented leaded gas and then CFCs, then he suffers from polio and invents a system of pulleys and levers [to help lift him off the bed], and that tangles around his neck and kills him. So there are a few tragic stories.

Speaking of leaded gas, which is famously neurotoxic, what is the invention in the book that has had overall the most negative impact on society?

It’s tempting to point out something which contributes to climate change like concrete or the diesel engine, but those things are inventions that have had enormous positive effects as well. So I would tend to point to leaded gasoline because that’s just one that’s a mistake and was sustained by years and years of lobbying. We didn’t need it, it didn’t have major benefits. There were other ways of solving the problem [of increasing fuel efficiency or vehicle performance]. So that just feels like total waste. Leaded gasoline, that’s one where you just go, ‘that’s just a shame we ever had that idea.’

If you had to choose one invention as the very most important in terms of world history, which would it be?

The one that inspires the most gratitude in me is the final one in the book, the lightbulb. The reason I wanted to talk about the lightbulb is this wonderful study done by the economist Bill Nordhaus. He very painstakingly tracks the price of lights in terms of human labor from 10,000 BC through to about 1992. If you want one hour of light equivalent to one candle, how long do you have to work? We’ve moved from a situation where, if I remember rightly, you could work for a week to produce one hour of good quality light, all the way through to today, where the labor cost is so small you couldn’t even notice it, it’s the blink of an eye.

Sometimes we need to count our blessings. All the inventions that have been produced over the last six to seven thousand years in the book, with a couple of exceptions, have made our lives better and easier. They’ve had their downsides, but we live in luxury compared with our forebears. It’s easy to lose sight of that or just pay lip service to that, but the development of the light bulb and just how much easier it is to sit and read or talk to friends and be able to see them at any time of day or night, that’s just such a remarkable thing. 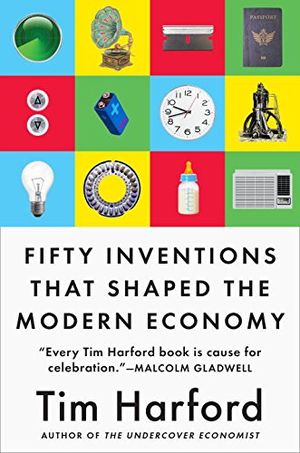 Fifty Inventions That Shaped the Modern Economy paints an epic picture of change in an intimate way by telling the stories of the tools, people, and ideas that had far-reaching consequences for all of us. From the plough to artificial intelligence, from Gillette’s disposable razor to IKEA’s Billy bookcase, bestselling author and Financial Times columnist Tim Harford recounts each invention’s own curious, surprising, and memorable story.