Fire on the Mountain: The True Story of the South Canyon Fire
John N. Maclean
Morrow

Little snow fell in western Colorado in the winter of 1994. May and June had been bone dry, with temperatures soaring above 100 degrees Fahrenheit — a combination that occurs only every 30 to 40 years, according to John N. Maclean, in his fast-moving, ultimately heartbreaking report of what became known as the South Canyon Fire. He is working in the tradition of his father, Norman Maclean, the author of both A River Runs Through It and Young Men and Fire, the classic account of another catastrophic blaze, the Mann Gulch forest fire of 1949.

The South Canyon Fire began with a thunderstorm that, on July 2, spiked its way through the Grand Valley of the Colorado River and hurled more than 5,600 lightning strikes against Storm King Mountain in Grand Junction, Colorado.

By the following morning, a resident of South Canyon had reported a "small whiff of smoke" on Storm King to the Bureau of Land Management. The storm's unfinished business had commenced.

One needs a playbill to keep track of the characters in Maclean's book. But the reader quickly understands why the author included so many of them—at least those who actually fought the fire. For every man and woman who hiked up steep ravines and parachuted onto narrow ridges that day put his or her life on the line. Not one among them knew who, if any, would survive what began as a lone burning pine and became what firefighters call a blowup, "a swirling mass of flame and primeval darkness" that "struck with the force of a comet." 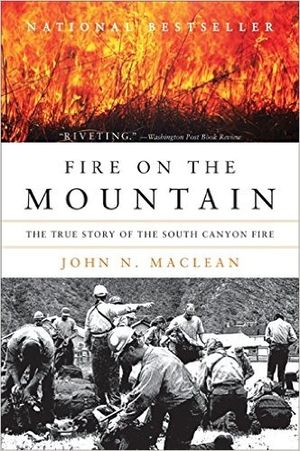 Fire on the Mountain: The True Story of the South Canyon Fire

This unintentional, seemingly minor human error was merely the first in a string of mistakes that would be compounded into one of the greatest tragedies in the annals of firefighting.

In Maclean's account, wind, weather and fire become as real as the characters who struggle against these forces. "Behind them an enormous wave of flame arose," he writes, "and began to sweep the ridgetop, driving the firefighters before it. It swelled to a height of 50, 100 and then 150 feet. It moved faster than any human could run....The flame wave began to break over the ridgetop, transforming the people into surfers riding the curl of a scarlet-orange wave of fire."

Maclean's scenes are transfixing and terrifying: "The hot gases curled in front of his gaping mouth," he writes of one firefighter, "but his screams kept them out of his throat....he caught sight of his hands. The skin hung in shreds." Another survivor was a few yards from safety when "he felt a slap across his arms and shoulders, as though a blowtorch had passed over him. His body arched, elbows drawn back, as heat penetrated his fire shirt and scorched his arms. He heard screams, his own for sure, but others', too."

In the end, ten men and four women died. Maclean's book is a search for answers to all that went wrong during the battle on Storm King Mountain. Some of his questions are answered; some answers may never be found.

Today granite crosses stand where firefighters fell. Storm King Mountain has become a pilgrimage for family, friends, the curious and the caring. But perhaps the finest monument is Maclean's book, which dramatically records the uncompromising power of fire and the extraordinary bravery of the men and women who do battle against it.

Emily d'Aulaire is a reviewer who is based in Connecticut.