Confederate Monuments Are Coming Down Across the Country

As protests sparked by the killing of George Floyd continue, statues commemorating controversial historical figures are being removed from U.S. cities 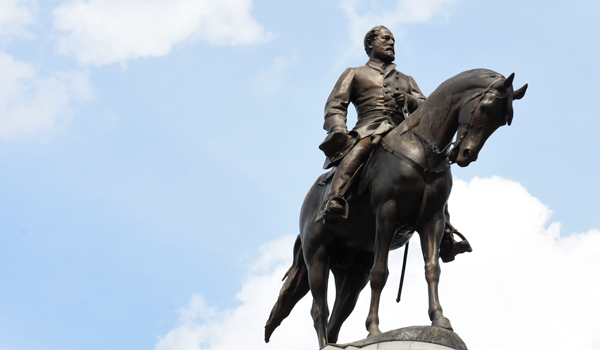 Amid widespread protests against police brutality and systemic racism, United States citizens and government officials are once again reckoning with public works honoring slaveholders, the Confederacy and other controversial political leaders. Authorities in multiple states have pledged or begun to remove the statues and plaques. Some protesters, meanwhile, have taken matters into their own hands.

Arguments over Confederate monuments are nothing new. As early as 1910, Senator Weldon B. Heyburn lambasted the government’s decision to memorialize Robert E. Lee with a statue in the U.S. Capitol. More recently, white supremacist Dylann Roof’s June 2015 killing of nine African Americans at a historically black church in Charleston, South Carolina, as well as a neo-Nazi’s August 2017 attack on people protesting a white nationalist rally in Charlottesville, Virginia, have reignited the debate. Now, in the wake of George Floyd’s killing, the national conversation continues.

During the late 19th and early 20th centuries, local and federal authorities—particularly in the Jim Crow South—started commissioning statues idealizing the illegitimate Confederate government. These monuments aimed to “pay homage to a slave-owning society and to serve as blunt assertions of dominance over African Americans,” wrote Brian Palmer and Seth Freed Wessler in a 2018 Smithsonian magazine investigation on the costs of the Confederacy. “ … [C]ontrary to the claim that today’s objections to the monuments are merely the product of contemporary political correctness, they were actively opposed at the time, often by African Americans, as instruments of white power.”

In 2019, the Southern Poverty Law Center reported that 114 Confederate symbols had been removed since the Charleston murders—but 1,747 still remained. Americans pay a price for these monuments’ maintenance: The 2018 Smithsonian investigation found that in the decade prior, taxpayers spent at least $40 million on Confederate statues, homes, parks, museums, libraries, cemeteries and heritage organizations.

As Zachary Small writes for NPR, a mixture of bureaucracy and fear of alienating critics has slowed politicians’ decisions on the future of Confederate monuments. In the last week, however, protesters driven by a new wave of anger over racial injustice have started directly targeting these monuments—and many city leaders are beginning to take action in their own right.

“A real reckoning is here,” Kirk Savage, an art historian at the University of Pittsburgh who studies public monuments, tells NPR. “Confederate monuments have become targets because they are powerful expressions of the brutal practices that led to Floyd's murder; they are the artworks that gild the system.”

These are some controversial public monuments that have been removed—either by protesters or governments—in recent days.

Last week, Virginia Governor Ralph Northam announced plans to remove a statue of Robert E. Lee from the state capital of Richmond. The work is one of the most prominent Confederate monuments in the country and has previously emerged as a nexus of controversy. Separately, Richmond Mayor Levar Stoney announced that he would propose an ordinance to remove four Confederate monuments along the city’s Monument Avenue.

“In 2020, we can no longer honor a system that was based on the buying and selling of enslaved people,” said Northam on Twitter. “Yes, that statue has been there for a long time. But it was wrong then, and it is wrong now. So we’re taking it down.”

As Smithsonian reported in 2018, the monument faced opposition even before its construction in 1890. John Mitchell Jr., an African American journalist and member of the city council, criticized the statue in his coverage of the statue’s unveiling, writing, “This glorification of States Rights Doctrine—the right of secession, and the honoring of men who represented that cause, fosters in the Republic, the spirit of Rebellion and will ultimately result in the handing down to generations unborn a legacy of treason and blood.”

On Saturday, protesters used ropes to pull down a statue of Confederate General Williams Carter Wickham that had stood in Richmond’s Monroe Park since 1891, reports Sabrina Moreno for the Richmond Times-Dispatch. Images posted on Twitter by Virginia Commonwealth University’s independent student newspaper, the Commonwealth Times, show the paint-covered statue lying at the base of a graffitied pedestal.

Alexandria, like all great cities, is constantly changing and evolving. pic.twitter.com/CZTjlOkpfT

Appomattox, a bronze statue commemorating Confederate soldiers from the city of Alexandria, was erected in 1889 at the intersection of South Washington and Prince Streets, where local troops had gathered before departing for the front some 30 years earlier. Last Monday, the sculpture’s owner, the United Daughters of the Confederacy, informed the city’s government of plans to remove it from its perch, reports Andrew Beaujon for Washingtonian magazine. The operation took place the following day.

“For a lot of our residents, they viewed this statue as a symbol of the subjugation of a significant portion of our population,” Alexandria Mayor Justin Wilson tells Washingtonian. “This is another marker of a long series of us turning the page.”

A 52-foot-tall obelisk known as the Confederate Soldiers & Sailors Monument was torn down in Birmingham last week following protests. As Colin Dwyer reports for NPR, protesters had already torn down a smaller statue of Confederate officer Charles Linn when Birmingham Mayor Randall Woodfin announced plans to officially remove the obelisk.

“I understand the frustration and the anger that you have. Allow me to finish the job for you,” he told a crowd, as quoted by AL.com’s Anna Beahm.

Per AL.com’s Jeremy Gray, the Confederate Soldiers & Sailors Monument was dedicated in 1905—nine years after Confederate General Stephen D. Lee, speaking at the laying of the memorial’s cornerstone, proclaimed, “May the blood of our martyrs be the seed of such a race in the future.”

The Linn statue was a newer addition to the city. In 2013,the Alabama-Mississippi chapter of the Multiple Sclerosis Society installed the statue in recognition of the sea captain and banker’s “great leadership.” Linn was reportedly an early proponent of Birmingham’s green spaces. He also founded the city’s first bank.

City officials removed a statue of Confederate Admiral Raphael Semmes from Mobile last week, reports Christopher Harress for AL.com. The bronze monument had been in place since 1900.

“To be clear: This decision is not about Raphael Semmes, it is not about a monument and it is not an attempt to rewrite history,” Mayor Sandy Stimpson told AL.com. “Moving this statue will not change the past. It is about removing a potential distraction so we may focus clearly on the future of our city.”

The removal came a few days after someone vandalized the statue’s sandstone base with red graffiti. Local authorities ordered Semmes’ likeness cleaned the following day, “as we would do with any public property,“ a spokesperson told AL.com.

After years of deliberation, the George Floyd protests finally prompted Philadelphia Mayor Jim Kenney to remove a statue of former mayor Frank Rizzo from the exterior of the city’s Municipal Services Building, reports the Philadelphia Inquirer. According to Alisha Ebrahimji of CNN, Rizzo served as Philadelphia’s mayor from 1972 to 1980. During his term, Rizzo—a former police commissioner—took a racist approach to policing.

“The statue represented bigotry, hatred, and oppression for too many people, for too long. It is finally gone,” said Kenney on Twitter.

Authorities had originally planned to remove the statue in 2021, but they decided to take action sooner in response to the protests, according to a statement.

A mural of Rizzo in South Philadelphia was painted over after being defaced by protesters, reports CBS Philly. Mural Arts Philadelphia, a local public art program, plans to collaborate with the building’s owners to create a new mural that “better represents the fabric” of the neighborhood.

I am at Garfield Park where city crews are removing a memorial to confederate war soldiers @indystar pic.twitter.com/MmXY2Sdrur

A 35-foot monument to Confederate prisoners of war who died in the Union Army’s Camp Morton between 1862 and 1865 was removed from Indianapolis’ Garfield Park on the orders of Mayor Joe Hogsett, report Vic Ryckaert and Justin L. Mack for the Indianapolis Star. Originally built in 1912, the marker was moved to a more prominent location in 1928, when local officials active in the Ku Klux Klan pushed to “make the monument more visible to the public,” according to a statement quoted in a separate Indianapolis Star article.

“Whatever original purpose this grave marker might once have had, for far too long it has served as nothing more than a painful reminder of our state’s horrific embrace of the Ku Klux Klan a century ago,” said Hogsett in the statement.

The statue of Edward Carmack, an early 1900s newspaper publisher who hated Ida B. Wells and alcohol and was gunned down on a Nashville street, has been torn down.

There has been a commission in the works for years to replace this with one of Davy Crockett. pic.twitter.com/7xOE5Yhy3n

Last week, protesters tore down a statue of lawmaker and newspaper publisher Edward Carmack that stood outside of the Tennessee State Capitol, according to Jon Garcia at the Tennessean. Carmack was known for writing editorials that attacked black journalist Ida B. Wells, as well as expressing patently racist views.

Nora McGreevy is a former daily correspondent for Smithsonian. She is also a freelance journalist based in Chicago whose work has appeared in Wired, Washingtonian, the Boston Globe, South Bend Tribune, the New York Times and more. She can be reached through her website, noramcgreevy.com.