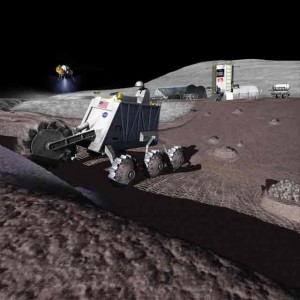 An excavating robot mines the Moon. Perhaps the writing should be in Chinese. (Pat Rawlings)

Much of the mass we launch for space missions is what I call “dumb mass” – heavy things like water and fuel that, while absolutely necessary, contain low amounts of information.  Regardless of launch costs, there is no virtue in launching this type of mass from Earth.  Learning to use what we find in space to create new capabilities is a skill that we must master to become “space faring.”  The Moon is in an excellent location relative to Earth; it is a well-stocked laboratory where we can learn and hone these skills.

Press coverage since the December 14th soft landing of China’s Chang’E 3 on the Moon has quoted officials of the Chinese space program as stating that their interest is in “mining” the Moon.  The desired commodity usually bandied about is 3He, the light isotope of helium that (in theory) could be used to fuel a “clean” nuclear fusion reaction and generate electrical power here on Earth.  Other possible lunar products mentioned in passing include metals such as titanium and aluminum.  But what exactly is meant when we talk about “mining” the Moon?  What materials on the lunar surface are useful and thus valuable?  Perhaps the term “useful” needs some exposition.

Mining merely means the extraction of some useful product from a planet.  In the context of extraterrestrial mining, useful might mean useful in space, not necessarily useful to import back to the Earth.  For example, right now, there are abundant terrestrial supplies of aluminum.  It makes no economic sense to mine aluminum from the Moon or some other space object for import back to Earth.  However, if we’re in the process of establishing a permanent presence on some extraterrestrial object, several tons of aluminum from local sources might be very handy. While no one would suggest exporting simple, low-processing materials such as bulk soil (regolith) and aggregate (concrete and adobe) back to Earth, they have uses and thus enormous value on the Moon and in space for local building and other engineering requirements.

The real value of extraterrestrial mining is accessing material outside of Earth’s gravity well and making products that enable and create new capabilities in space and on other worlds.  So far, we have not found any deposits of unknown materials in space that cannot be found on Earth (the “unobtainium” beloved of science fiction writers).  But we have found deposits of common materials that, while having no economic value for return to Earth, have enormous value in space.  Anything that we can find and use on another world means that much less material that has to be launched from the surface of the Earth.  With launch costs of many thousands of dollars per pound, every bit of mass that we can find and use in space is that much less budget-busting dumb mass hauled up from Earth.

I believe that the real game-changer for mining the planets is water.  This most common of substances is the most valuable commodity in space because it has so many uses.  Water is attractive because it is easily transportable in solid or liquid form, but it is massive and thus, expensive to move around in space.  Most of the uses of water in space will probably happen close to the sources from which we extract it, either on the planetary surface or in the space just above and near them.

Water is required for life in general and in particular, for human life here and in space.  We can drink the water, use it to reconstitute dehydrated food, use it for thermal ballast, and protect ourselves from the hard radiation environment of deep space by jacketing spacecraft and habitats with it.  Water is a simple molecule (H2O) and can be broken into its constituent elements by the process of passing an electrical current through it; we can thus easily “crack” water into its components (hydrogen and oxygen) and store these gases for later use.  The obvious use for this oxygen is to provide breathable air for space habitats.  But additionally, because the water cracking process is reversible, we can take these gases and combine them in fuel cells to create electricity.  This makes for a fascinating possibility; during the day, we can crack water into hydrogen and oxygen using electrical power derived from solar panels and store these products in tanks.  During times when the Sun is not visible (either night on a planet or during eclipse in space), we can re-combine these gases to generate electrical power.  Such a device is called a rechargeable fuel cell (RFC) and can provide continuous electrical power for space vehicles and habitats.  Thus, water becomes a medium for energy storage, being broken apart during daylight and recombined during the night, allowing for continuous and reliable power in space.  The valuable by-product of this process is excess water for life-support and other uses.

The last major use of water is probably the most important in terms of creating new capabilities in space.  When water is broken into its constituent gases and then frozen into liquid (cryogenic form), it becomes rocket fuel.  Liquid hydrogen and oxygen are the most powerful chemical propellant known.  The ability to make rocket fuel in space changes almost everything we know about the economics of spaceflight.  Because of its high cost, anything that we can do to lower the required mass launched from Earth saves money and makes spaceflight more capable.  In the case of missions beyond low Earth orbit, most of the mass of the Earth departure vehicle is fuel.  For a human Mars mission, more than 80% of its total mass is propellant.  Most of that propellant will be used in the rocket burn to leave Earth.  Thus, by obtaining the required propellant from a space-based source and refueling there, the total lift-off weight (cost) from Earth is much lower.

Although hydrogen-oxygen is the most powerful rocket propellant, its use does have some drawbacks.  Hydrogen has a very low boiling point, only about 20° above absolute zero (-253° C).  This extremely low temperature is difficult to generate (i.e., power intensive) so making cryogenic hydrogen is a tough proposition.  Moreover, hydrogen has an extremely low density, so storage tanks for liquid hydrogen are very large and bulky and must be carefully insulated to minimize the “boil-off” of the fuel.  Boil-off is an important problem that must be solved if we are to use space-derived cryogens for propellant; it involves capturing the boiling vapor and condensing it back into liquid form again to prevent its loss to space.

Some argue that since hydrogen is so volatile and difficult to work with, we should focus solely on obtaining oxygen from planetary sources as that gas is 16/18ths (89%) of the mass of water.  Producing liquid oxygen (boiling point of -183° C) is much easier than liquid hydrogen and it is more easily handled and stored.  However, we would still need some type of fuel to burn with this oxidizer; a variety of other substances could be used for rocket fuel, including methane (CH4), ammonia (NH3), sulfur (S) and even powered aluminum (Al).  Interestingly and fortunately for us, all of these substances are found in the deposits of the lunar poles – the most valuable real estate in our Solar System with peaks of near-constant sunlight for power generation.

The real value created by mining the Moon (or any extraterrestrial object) is capability – the ability to move more freely, more often and with more mass in and about cislunar (Earth-Moon) space where most of our national security and economic satellites reside.  By creating an off-planet supply depot, we free ourselves from the tyranny of the rocket equation.  I don’t know if the Chinese see the “problem” this way or not.  But they should.  I believe that eventually, they will.  And so must we.

The Chinese do not appear to be waiting for “magic beans” to lower launch costs.  There are many reasons to believe that those costs have already fallen about as much as they will, barring some major new launch vehicle paradigm.  By holding back and betting on some major new launch breakthrough materializing, the United States could be walking away from a sure thing – leaving the innovation and technology field, and with it the economic and national security benefits that will follow, to countries who recognize the strategic value and potential of the Moon and are already making plans to tap into it.