Pluto may be small, but it glimmers with enticing unknowns.

This we do know—it’s the only planet found by an American, Clyde Tombaugh, who only received a high school education but had a knack for telescopes. He got lucky when he looked in a distant, dark sky for new wonders and found a small speck in 1930.

Pluto also is fantastically cold, at 43 degrees above absolute zero. For much of its orbit, the entire atmosphere freezes out. We may get to see that happening when NASA’s New Horizons spacecraft zooms by it this July.

But we are drawn to Pluto for its mystery. In literature, there’s poetic reference by the Hungarian poet Robert Zend, describing the dwarf planet as “the old man who lives alone in the attic, visible only by the glint of the Sun off his pince-nez.”

For the last 85 years, Pluto has belonged to the science fiction writers, who imagined what wonders it might hold. Soon we shall see if any of their ideas hold up.

In his first novel, World of Ptavvs, Larry Niven depicted an astronaut landing in the Plutonian atmosphere, his vessel’s hot exhaust releasing the frozen methane and oxygen and causing the entire planet to burst into flames. In a later story, Niven imagined an even odder fate. A stranded astronaut freezes, only to find that his nervous system has become superconducting and that he can still think, frozen solid. He watches the stars, but sunrise heats him and shuts down his mind, until night wakes it again. Only on Pluto could this happen. Another expedition will come. What can he do? The story’s title gives the answer: “Wait It Out.”

In 1984, in Kim Stanley Robinson’s novel Icehenge, explorers find a circle of ice monoliths much like Stonehenge, built by … whom? A mystery.

Steven Baxter’s 2001 story “Goose Summer” has Pluto harboring life like snowflakes or goosedown, which reproduces only when Pluto’s highly eccentric orbit brings it near the warmth of the sun. (This odd orbit once led to suggestions that maybe it’s an escaped Neptunian moon, which led to other stories, too.)

My own 2006 novel, The Sunborn, has small, smart creatures thriving along the shore of Pluto’s supposed nitrogen sea. These life forms prove to be an experiment conducted by magnetic entities living in the far reaches beyond—creatures four billion years old.

Other attempts to imagine exotic lifeforms on such a dim freezer of a planet are appearing now, as New Horizons nears the shrouded world. So it goes.

Pluto has a big moon, Charon. The two are locked in an eternal waltz, so that each always faces the other. (Our moon does this, too, but our unlocked Earth retains its rotation.) Baxter’s story also envisioned life sending strands like cobwebs from Charon to seed the surface of Pluto. In 2003 Niven wrote a story with Brenda Cooper building on this idea. They describe a living sky cable of vines connecting the worlds, so that life can use both.

This is the last planet we’ll see up close for the first time—at least until we can send starships to other suns. We can expect, when New Horizons’ flies past Pluto, some confirmations of our many theoretical models. Far more important, we can expect surprises. First will come fresh pictures. Then will come streams of data about the fields and particles surrounding the planet. From that we can fashion a deeper understanding of this small, dim, world.

What we learn will apply not just to Pluto and our own solar system. Soon we’ll have many more to deal with. The Kepler spacecraft and other telescopes have found more than a thousand solar systems around distant stars. To puzzle out how they form, understanding our own is essential. Only by such comparisons can we learn whether life is widespread in our galaxy.

The data from New Horizons will be critical in this regard. They can also be the source of intriguing new speculations by science fiction writers. 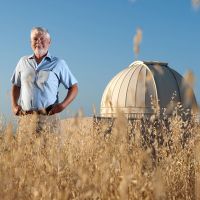 Gregory Benford is an emeritus professor of physics and astronomy at UC Irvine and the author of Timescape. His latest book, The Best of Gregory Benford, is published by Subterranean Press.