Mohamed Noor, a professor in the biology department at Duke University, combines his love of genetics and Star Trek in a new book, Live Long and Evolve: What Star Trek Can Teach Us about Evolution, Genetics, and Life on Other Worlds, which uses science fiction as a guide to exploring the possible existence of extraterrestrial species. Noor spoke with Air & Space senior associate editor Diane Tedeschi in December.

Air & Space: Why did you write this book?

Noor: My aim was to pique readers’ interest in the subjects of evolutionary biology and genetics, and to have them learn more about these subjects using a medium in which they might already be interested: science fiction.” I had been giving talks at science fiction and comic conventions and other venues about the science behind science fiction (and Star Trek in particular) for a few years, and this book was a natural follow-up for me to put thoughts together in a comprehensive manner. The book’s coverage mirrors what I present in my general introductory biology course at Duke University and online in Coursera, but the book examines and assesses the principles covered via Star Trek examples as well as real-world ones. It was a delightfully fun experience connecting my teaching and research topics with my love of Trek.

What is an example of something that Star Trek gets right in terms of its grounding in science?

Episodes across the Star Trek series have used genetics terms like “dominant” and “recessive” correctly, and many episodes used examples of genetic testing quite accurately. For example, in the “Star Trek: Voyager” episode “State of Flux,” there was discussion about why a particular character might not be of the species that she claimed based on a DNA test of her blood. She tried to explain it away by noting that she had gotten a bone marrow transfusion from the other species. Blood cells are produced by bone marrow, and if one received a bone marrow transplant, then at least some of their blood cells may bear the foreign DNA from the donor. This was a creative idea with a good scientific basis.

Have your ever seen a depiction of science in Star Trek that was laughable?

Oh, my goodness yes. A lot of the depictions of “evolution” in particular are problematic. In the “Star Trek: Next Generation” episode “Genesis,” the crew were infected with a virus that purportedly caused them to “de-evolve” into very distantly related life forms. One person even became a spider. Among its many, many problems, the episode script reflects a popular misconception that our ancestors look like other present-day life. Humans have a common ancestor with chimpanzees, but we did not evolve from chimpanzees (or spiders). Using an analogy with a shorter time-scale, we have first-cousins and share common ancestors with them (our grandparents), but we do not descend from our first-cousins.

Do you sometimes use Star Trek references in the university courses that you teach?

I teach a yearly spring-break course at Duke University with my colleague, Professor Eric Spana, who gives talks at conventions and other venues on the science behind Harry Potter, Captain America, and other fandoms. Our class is called “The Biology of Popular Science Fiction TV and Movies,” and we challenge students to not just throw stones at scientific errors in Trek and these other fandoms. Instead, we want students to find a way to make it work using real science.

In the first year of the course, we watched Kong: Skull Island and assigned students to compare and contrast Skull Island with Madagascar for the features and diversity of species present. Like my book, our goal with the course is to get students excited about science and scientific research by having them engage in thought experiments generated through fiction. I will also teach a full-semester non-majors biology class for first-year college students based on my book this spring.

How did your interest in Star Trek begin?

I started watching Star Trek as a child around 1978. I really liked the exploration aspect of the series, and I have continued to watch every new series or movie since then.

How do you feel about the name “Trekkie”?

Although the term is sometimes used in a condescending manner, I happily embrace my nerdiness and call myself a Trekkie.

Of the various extraterrestrial humanoid species that appear in the franchise, are there any that Earthlings would do well to emulate?

I would love to see modern humans emulate Vulcans a bit more. Vulcans are sometimes erroneously described as having no emotions, but in the series, Vulcans bear emotions and yet embrace logic and emotional discipline in their interactions. Additionally, a core tenet of Vulcan philosophy is infinite diversity in infinite combinations, which Mr. Spock interprets to mean that there are many “ways our differences combine to create meaning and beauty.” This embrace of diversity, coupled with a respect for science and logic, could make our world a better place. Instead, we seem to have become a bit too much like the Star Trek Ferengi species, for whom earning profit is the primary goal in life.

Do you have a favorite Star Trek television series?

I really, truly, enjoyed every one of the series and cannot pick a single favorite. I have enjoyed most of the movies as well. However, changing your question, I really like and admire Captain Kathryn Janeway of “Star Trek: Voyager” among the captains. She started as a science officer in Starfleet, and she heartily embraces basic scientific exploration. I love how excited she gets about solving problems and discovering new phenomena. Some of the crew even tease her for how much time she has them spend researching alien species or spatial anomalies rather than focusing on getting her ship back home. She is also an excellent leader who is calm yet decisive despite being in an extremely stressful situation for literally the entire series. 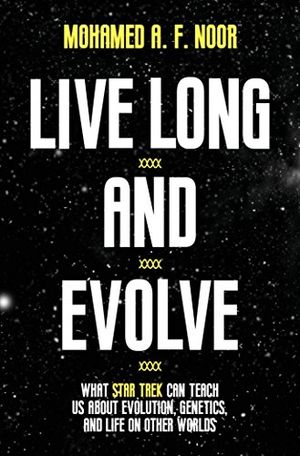 Live Long and Evolve: What Star Trek Can Teach Us about Evolution, Genetics, and Life on Other Worlds