A B-52 navigator-bombardier in the Vietnam War, Robert O. Harder is the author of The Three Musketeers of the Army Air Forces, which chronicles how the lives of Paul Tibbets, Tom Ferebee, and Ted Van Kirk changed after they flew a mission that dropped an atomic bomb on Japan on August 6, 1945, helping to end World War II.

Air & Space: Why did you want to write this book?

Harder: I have long been interested in writing about the neglected historiography of non-pilot, officer aircrewmen: the observers, navigators, bombardiers, and electronic warfare officers. Two of my three subjects, Tom Ferebee and Ted “Dutch” Van Kirk, were non-pilot flying officers. I also realized that a comprehensive biography of the three men as a unit, if you will, had never been written. My confidence in attempting to speak for the men was bolstered by my own background. Having been born into an aviation family and as a former U.S. Air Force navigator-bombardier and still-rated commercial pilot, I had been trained in much the same way. In the late 1960s, I served briefly with then-Col. Ferebee. In 2013 and 2014, I interviewed Dutch Van Kirk extensively. Dutch gave me a facsimile of his actual Hiroshima log, and it was invaluable in terms of reconstructing the mission.

What are some of the misrepresentations that have been repeated about Tibbets, Ferebee, and Van Kirk?

Probably the worst misrepresentation hurled against all three men was that they were warmongers and murderers. Today we have the luxury of being able to debate whether atomic weapons were fair use. But in the heat of the war in the summer of 1945, when thousands of Americans were still dying daily and every soldier’s sworn duty was to kill the enemy, difficult decisions had to be made.

While Ferebee and Van Kirk remained relatively unknown through the years, Paul Tibbets became the public face of America’s atomic bomb arsenal. A decision to retain an unstable B-29 pilot named Captain Claude Eatherly on the roster of the [509th Composite Group] very nearly wrecked Tibbets’ reputation in the late 1950s. Eatherly became unhinged after the war, robbing post offices and getting himself committed to mental institutions. Anti-war activists got hold of the man, and before they were done, Eatherly began claiming that he—not Paul Tibbets—was the “Hiroshima pilot” and that the mission had been responsible for his derangement. There are people today who still believe Tibbets became insane over the matter, and he had to endure questions about the false story until the end of his life [Tibbets died in 2007].

Is there anything people should know about Paul Tibbets that isn’t widely known?

Tibbets never got credit for the many little things he did for his men. Often, an enlisted man would [be granted] a surprise leave to go back home to marry the hometown girl or visit an ailing mother.

Years later, Tibbets admitted to his grown sons that their mother got a bum deal. So consumed was he by his work and the war, he virtually ignored his family. It did not help that he was forbidden to tell [first wife] Lucy anything about his work. When Tibbets was unable to mitigate the damage, it shattered their marriage [they divorced in 1955]. 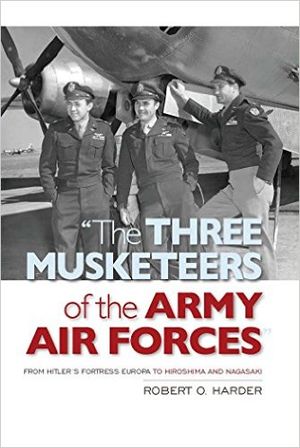 The Three Musketeers of the Army Air Forces

Harder provides a rare insider’s look at exactly who the three men that led the raid were, how they were trained, what they meant to each other, and how everything coalesced into the Hiroshima and Nagasaki attacks.

How was the 509th Composite Group regarded by other groups in the Strategic Air Command?

Initially, on Tinian Island in the Marianas, the group was not greeted enthusiastically. Tibbets had evicted a long-serving B-29 group from their choice quarters, which really got his group off on the wrong foot.  Further, it was clear the 509th people considered themselves special, and the inevitable braggadocio that they were there to win the war did not set well. Also, the 509th did not participate in the much more dangerous conventional bombing missions, and that led to a certain feeling they were a candy-assed outfit that had conned the brass into some kind of cushy assignment.

Did the classified nature of the atomic missions ever start to weigh on Tibbets, Ferebee, or Van Kirk? Did they have ways of handling the pressure of such an unprecedented mission?

Tibbets took the brunt of the security pressure because even Van Kirk and Ferebee did not know they were dealing with atomic bombs until the day of the Hiroshima mission. It was very difficult on Tibbets. As I stated earlier, it contributed to the breakup of his first marriage. He said the hardest part was telling somebody a white lie about what he was doing and then six months later, he had to remember what he’d told them. August 6, 1945 came as a great relief because at last Tibbets could unburden himself from his great responsibility--not only had he accomplished his mission but he’d kept it secret. He never hesitated to remind interviewers that his unit never had a security leak while the Manhattan Project itself was riddled with them.

Looking back it seems incredible that the nation would have handed over such tremendous authority and responsibility to a 29-year-old lieutenant colonel. As Tibbets himself once said late in life, “I can never imagine it happening again.” It is a testament to the tremendous faith General Hap Arnold, commander of the Army Air Forces had in him. There had been only two other officers considered, and they only briefly.