When Sasha Maslov began photographing World War II veterans, his goal was to tell each individual’s story in a portrait. “I’ve always been interested in portraiture in general,” says Maslov, whose photojournalism has appeared in the New York Times, the Wall Street Journal, and other publications. “But I wasn’t sure how to tell stories.” The desire to move from documentary photography to portraiture began in 2005, when Maslov photographed a group of inmates staging a play in a Ukrainian prison. “I shot a portrait of a woman whose son was an inmate. It was one of the few times she could visit him, and she came there to tell him that his brother, her other son, had died. And she couldn’t tell him before the performance, she had to wait. I realized that portraits can tell so much, but I wasn’t sure how to do it; I didn’t have the proper training.”

Five years later, Maslov was ready. On a trip to Moscow in 2010, he began to contact local veterans, asking if anyone would be willing to tell his story and sit for a portrait. Over the next six years, Maslov traveled to 22 different countries, interviewing more than 100 people. The result is the remarkable Veterans: Faces of World War II (2017, Princeton Architectural Press), published this week.

The people featured in the book—pilots, engineers, prisoners of war, Holocaust survivors, and others—give extraordinarily candid interviews. “Sometimes they seemed to feel it was their final chance to tell their story,” writes Maslov in the book’s preface. “There were a few instances when people told me things they had never spoken about before or had blocked from their memories.”

While each person is photographed in his or her home, the interiors are distinct; “I wanted to include things that would signify the individuals and show their lives through their objects and spaces,” writes Maslov. The results are unexpected: The portrait of B-17 pilot Stuart Hodes, for instance—who, after the war, became a dancer with Martha Graham’s company—shows him surrounded by biographies of Broadway luminaries. He’s photographed in front of a velvet curtain, as if he’s about to go onstage. Ichiro Sudai, who trained to be a kamikaze pilot, went on to design gardens and study workworking. He kneels next to a bonsai pine tree in a room featuring beautiful hardwood floors rather than traditional tatami mats.

Of the 53 people included in the book, Maslov declines to pick a favorite image or interview: “All of them are important,” he says. “Some of the stories are more eventful and thrilling than others, and some are very quiet, but very emotional. But all of them have stuck with me.”

Photographs and text excerpts are reprinted with the permission of the publisher. All © Sasha Maslov from Veterans: Faces of World War II © 2017 Princeton Architectural Press. 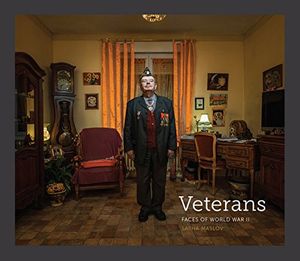 Ichiro Sudai trained to be a kamikaze. Roscoe Brown was a commander in the Tuskegee Airmen, the first African American military aviators. Uli John lost an arm serving in the German army but ultimately befriended former enemy soldiers as part of a network of veterans-"people who fought in th...