Some pilots joke that the appearance of their plane does not matter to them, because they are looking out from the inside of it. Still, the aesthetic qualities of airplanes are a regular topic of contemplation and conversation. Pilots might say that one airliner looks right, or that another looks—vaguely, but definitely—wrong. Or that one plane looks as though the engineers kept sticking bits on, seeking a frustratingly elusive aerodynamic solution, each design amendment then requiring another; whereas, other planes look good from the start.

Occasionally one airplane catches the imagination of pilots and cabin crew, or even of the general public. More than a few colleagues told me they decided to learn to fly only because they wished to fly the 747. I am never surprised when a colleague’s email address contains those famous numbers.

Recently I was taxiing a 747 past a portion of the tarmac at San Francisco that was closed off for reconstruction. More than a dozen airport workers, presumably already accustomed to the sight of airplanes at close range, nevertheless put down their tools to photograph us. On one summer evening near sunset when I was flying over the Netherlands, a different aircraft type passed over us, and the other pilot let out an aerial catcall to our 747, a low whistle over the radio, then: “I hope you have a lovely day on that lovely aircraft.”

Partisans often say that the 747 jet “just looks right.” I agree, but this isn’t necessarily what you’d think of a plane with such an unnatural bump (a design that moved the cockpit upward and back to permit an up-swinging cargo door to be fitted to the nose). The lines of the 747 may be so satisfying not despite this nose but because of it. Maybe it recalls a natural relationship, that of the head of a bird—a swan perhaps—to a long body and wide wings. Joseph Sutter, the 747’s lead designer, was drawn to birds as a child: eagles, hawks, ospreys. He might be pleased to know that his achievement has come full circle, that a writer on the wildlife of Virginia has described the great blue heron as the “747 of the swamp.” Sutter remarked that his airplane was “a place, not a conveyance,” one that an architectural magazine would describe as the most interesting edifice of the 1960s and that the architect Norman Foster would name as the 20th century building he admired most. Yet this building, this place, moves nearly as fast as sound itself.

Then there is the airplane’s solidity, the metal heft of it so incompatible with the ungraspable medium it moves through. We speak of a jet’s weight in shorthand—340 today for take off to San Francisco, 385 to Singapore tonight—and I am occasionally shocked to recall that the unit we do not bother to append to these numbers is metric tons. The 747, whatever its abilities to make light of the planet, is too heavy to stand on the tarmac of many of the world’s airports.

When visitors clutching the latest smartphones come into the cockpit of the 747, they are often so shocked by its relative antiquity that they can’t help but comment on it. Many pilots take such a reaction as a compliment, and joke that “it’s a classic” or “it’s steam-driven but we like it that way,” while resting their fingers affectionately on the four stilled throttles. 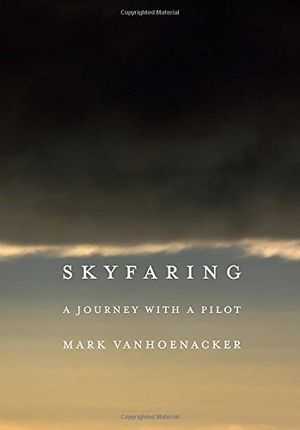 Skyfaring: A Journey with a Pilot

Mark Vanhoenacker, a 747 pilot who left academia and a career in the business world to pursue his childhood dream of flight, asks us to reimagine what we—both as pilots and as passengers—are actually doing when we enter the world between departure and discovery.

It’s October 2007, and I’m entering the cockpit of a 747 for the first time. But there’s only a cockpit. No plane is attached to it. It is a box, surrounded by banks of screens, perched on jacks in a cavernous room. Though the simulator’s wraparound video screens do an admirable job of conjuring the cockpit’s expansive views of the world, the simulator must also simulate the blindnesses that are a striking feature of flying a large airliner. The plane is so high, and the nose so rounded, that we cannot see anywhere underneath or immediately ahead of the plane.

From the cockpit, we cannot see anything behind us. When giving taxi instructions, air traffic controllers must take account of this. For example, they may ask us to inch forward to allow an aircraft behind us to make a turn, the kind of maneuver that might occur naturally between courteous drivers using their rearview mirrors. On some airplanes the pilots can see nothing of the wings. From my seat on the 747, I can see only one of the four engines and a small portion of one wing, and even these only with difficulty. Nor can we see the wheels, some of which are 30 yards or so behind us, or the tail, a further 40 yards or so behind them. Because of this unseen length, and the enormous wingspan, maneuvering on the ground can be more challenging than flying. It’s like walking while carrying long planks of wood: You must adapt your sense of size and shape and consider beforehand how you will move and turn. Sometimes a controller asks us to report when we have left a runway, and we must remember that while we, in the cockpit, have left the runway area, nearly all of the rest of the plane behind us has not.

Occasionally an airline pilot flies an empty plane. Flights without passengers are routine for cargo aircraft, of course; that is their purpose. To fly a passenger plane that has no passengers feels unnatural. It occurs rarely, when weather disruption has left an aircraft at the wrong airport or when it needs to be moved to or from a maintenance base, for example. I have flown an empty airliner only a handful of times. Even before departure, the idea that no passengers will join us is discouraging. The red-cap may shrug when they meet us on such days. Their work is, of course, much easier without passengers, but they do not appear to like it either.

Flights with no passengers are often flights with no cabin crew either, so one of the pilots must help close the door on the empty and silent main deck before heading upstairs to join colleagues in the cockpit. Opening or closing an aircraft door safely is not entirely straightforward, and until my first flight on an empty aircraft I had never actually opened or closed a 747 door other than during annual training exercises, practicing with flight attendants on an aircraft mockup with a door to nowhere. Takeoff on an empty plane is different too. The jet feels unnaturally light. The absence of passengers is measured in tens of tons, a rare reminder not only of the size of airliners but also of the physicality, the take-this-up-there mechanics of flight.

On an empty flight it is a pilot who must walk through the cabin to conduct the routine safety checks that the cabin crew normally perform. On the 747, this requires a long and lonely walk away from my one or two colleagues in the cockpit, downstairs and all the way back, past hundreds of empty seats that may be dressed and ready—magazines, toothbrushes, and headsets laid out—for the passengers that are not there.

I’m on an empty aircraft, flying from San Francisco to London. Among the three pilots, I am allocated the first break, and I choose to take it in a comfortable seat in the cabin downstairs, rather than in the cockpit bunk, because I’ve never had the experience of dozing in the entirely untenanted volume of a 747’s passenger cabin. Humming to myself, I prepare a luxuriant bed in the nose of the jet, more a nest really, from the all-but-unlimited supply of blankets and pillows. I think of the vast cells of the cargo holds below me, which are nearly full tonight with the computer and biotechnology equipment and fresh fruit and vegetables that are the fingerprint of the California valleys and industrial parks we overflew on departure. Outside I can see the peaks of the snowcapped Sierra Nevadas streaming past in the gathering dusk. But breaks are short enough without sightseeing, and so I lie down to sleep.

What I hear next is the wake-up call at the end of my break. On a normal flight this would be a chime in the bunk area triggered remotely by the other pilots, a pleasant enough noise that is nevertheless burned into every long-haul pilot’s brain as the last thing we want interrupting our dreams. On this empty flight, however, my wake-up call takes the form of a public-address announcement, personalized to me from a colleague in the cockpit, broadcast to the hundreds of empty seats and one lonely pilot who suddenly bolts upright in a corner of the forward cabin.

It takes me much longer than the usual sleepy moment to realize where I am. The plane has been flying toward the night of the north and the east, so it is dark outside and nearly dark inside as well. Scattered oval pools of cold moonlight spread across the cabin floor and roll gently back and forth over the carpet with the sway of the vessel in the high wind. No curtains are drawn between the cabins, and as I look down the full length of the main deck, only a few splashes of light dot the shadowy abstraction of the aisles. I sit in my pajamas on the cabin floor, contemplating for a moment the white noise of the engines and the uninterrupted length of this ghost ship, this peculiar library of numbered and lettered vacancies that is even now heaving itself forward toward the Arctic.

The phrase “souls on board” comes to mind, an antiquated term in aviation that is still heard when an air-traffic controller, for example, wishes to know the total number of persons, passengers and crew, on an aircraft. Many tens of thousands of passengers and crew have flown on this plane and will fly on it; no one who saw only the map of us, the far-scattered constellation of our present locations on Earth, would ever guess that what we had in common was one airplane. I change out of my pajamas in front of the unshuttered windows, which for once open onto a night no less lonely than that inside the cabin.

I walk upstairs and make my way carefully down the dark aisle of the upper deck. The cockpit door has been open the entire flight—there is no reason to close it tonight—and from the end of the upper-deck cabin the softly glowing cockpit screens are as welcoming as a hearth. I walk past the empty seats and through the open door. The mug of tea my colleagues have made for me is steaming in a cupholder by my seat. As I walk in I say: Guess who? And the captain laughs, because tonight there is no one else in the world it could be.