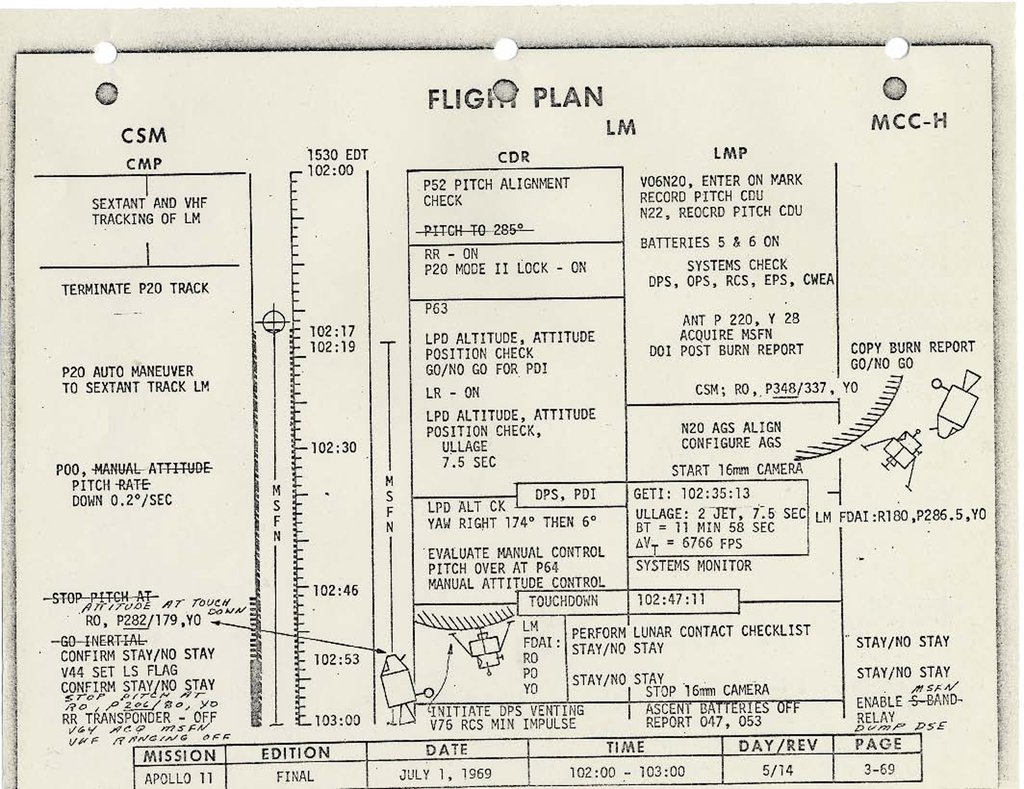 Eight years after President Kennedy's pledge to put a man on the moon before the Soviets, America's state-of-the-art space program was poised to make history as the whole world watched in awe.

The Apollo program had involved 400,000 engineers, technicians, and scientists from 20,000 companies and the military in cutting-edge research and logistic activities at a cost of $24 billion. But in July 1969 all of that complex preparation and expense would boil down to a simple question: would the mission succeed or would it fail? Three astronauts' lives would hang in the balance. And the operation would be broadcast live to a worldwide television audience.

On July 1, 1969, the Manned Spacecraft Center in Houston issued a 363-page Final Flight Plan for NASA's scheduled launch of the Apollo 11 on July 16. It spelled out the mission in complete and precise technical detail.

The five-part plan provided a minute-by-minute timeline of activities for each member of the mission crew, starting with the launch and lift-off from Kennedy Space Center Launch Complex 39A at 9:32 A.M. The detailed instructions and data tracking continued through the flight, lunar orbit, moon exploration, return flight and reentry and splashdown.

Apollo 11 was programmed to travel 240,000 miles in 76 hours before entering into a lunar orbit on July 19. The next day, Armstrong and Aldrin were trained to man the lunar module Eagle while Collins remained behind in the command module. Two hours later, the Eagle would begin its descent to the lunar surface and land on the southwestern edge of the Sea of Tranquility.

During their 21 hours and 36 minutes on the moon, the astronauts were scheduled to carry out a wide assortment of duties including taking photographs and samples of the terrain, planting a U.S. flag, running various scientific tests, and speaking by telephone with President Nixon. Aldrin and Armstrong would sleep that night on the surface of the moon, then return to the command module.

The Apollo 11 mission proceeded exactly according to plan. Black and white video from the voyage was transmitted to Earth with amazing clarity as 600 million people, one-fifth of the world's population, watched on television.

The flight plans, officially known as "flight data files," for Apollo 8 to Apollo 17, and other records related to the Apollo program, are in the custody of the National Archives in Fort Worth, Texas.