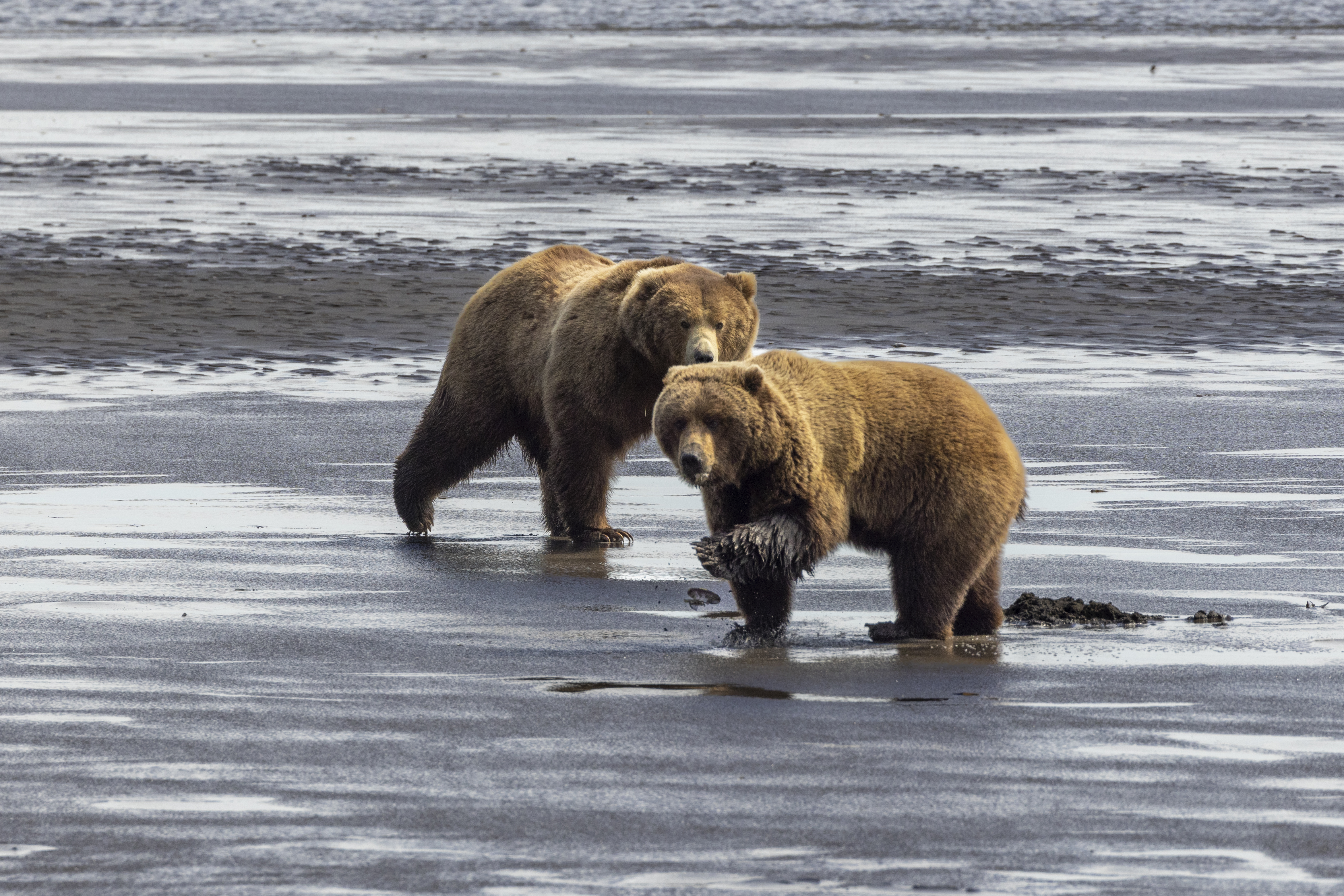 Looking down from the two-story viewing stand, I scanned the meadow below and started counting brown bears. When I hit 12, I turned to our guide, curious as to what the record was for bears spotted at one time in this very spot. I was stunned to hear the number was more than 70.

It was early June, and I was in Alaska’s Lake Clark National Park and Preserve, located about 120 “air miles” southwest of Anchorage just across Cook Inlet from the Kenai Peninsula. With more than four million acres, the park has three National Wild Rivers, the Chilikadrotna, Mulchatna and Tlikakila, coursing through its expanse; two active volcanoes, Redoubt and Iliamna, designated as National Natural Landmarks; and a brown bear population so dense that researchers once recorded seeing 219 bears when surveying a 54-square-mile coastal area.

According to the National Park Service, 95 percent of U.S. brown bears live in Alaska. Lake Clark National Park has both coastal and inland brown bears of the species Ursus arctos horribilis. The coastal bears are generally larger, since they have an abundance of food like sedges and salmon. By the time they den up each fall, males can weigh more than 1,000 pounds, with females generally around two-thirds of their size. Inland brown bears, often called “grizzlies,” generally eat a different diet largely consisting of ground squirrels, plant roots, berries, insects and fish from rivers and lakes, and they are typically smaller than coastal brown bears.

No roads exist in the park, so visitors arrive primarily via private aviation, with a number of air taxi services available. Boats can also access the park, though rough waters make this option less popular.

“Getting [to the park] is complicated,” says Buck Mangipane, Lake Clark National Park’s natural resource program manager. “You’re dealing with tides and weather, so it is not the easiest place to visit, but people certainly do have success getting out there, and coming out to see the bears, and fish, and other activities that are common on our coast.”

I journeyed with fellow visitors to Natural Habitat Adventures’ Alaska Bear Camp, on Chinitna Bay on the southern end of the park, via a charter flight from Homer—about a 30-minute journey. We had to wait for the fog to lift before departing, and the pilot had to time our journey with the tides to ensure we could land on the beach. Buckling inflatable life jackets around our waists, we climbed into the small plane, pulled on our headphones and flew across the water, gazing at Iliamna’s steaming vents and glaciers before landing on the gravelly beach in front of camp.

With the exception of a few miles of trails located near park headquarters in Port Alsworth, the park is trail-less. Overnight visitors can stay at various lodging options on private land within the park. Highly skilled and adventurous visitors may also choose to embark on a primitive backcountry camping trip, but it’s important to be fully prepared for the hazards of the remote, isolated, rugged wilderness. With waterways to ford, rugged terrain, extreme tides and dense bear populations, some may prefer to hire a professional guide to explore the backcountry. The best time to see bears along the coast is from late May until early September.

Bear Camp is a “glamping” site with eight cozy, heated tent cabins on wooden platforms encircled by an electric fence. On one side of the camp is a beach and tidal mud flats—where a subset of bears digs for clams and other food—and behind it is a salt marsh meadow full of sedges. These protein-packed grasses are highly nutritious for bears, making the meadow I was overlooking a prime spot for them to congregate after emerging from hibernation ready to calorie-load.

Caprice Stoner, who has managed the camp for 17 seasons, also serving as a guide, spends so much time at the camp, she sees individual bears year after year and gets to know their quirks. This summer, a female bear and her twin cubs were frequently spotted by some rocks near a neighboring homestead. Other bears, like one large dominant male with distinctive battle scars, including a missing chunk of ear, preferred to give humans a wide berth. Stoner often saw a young subadult whose mother recently sent him off on his own.

“He was a little bit skittish of anything and everybody, every other bear that walked up on him in the meadow, so he would run up a tree every single time because he was scared, and he didn’t know his place in the world,” Stoner says. “He’s learning, and it is fascinating to see them come up in the society of bears.”

As Lake Clark’s natural resource program manager, Mangipane has conducted research in the park for two decades. “Given that bears are a big draw for our visitors and also a huge part of the ecosystem, our understanding of their population is really important,” he says. His team conducts aerial survey work, counts bears in the sedge meadow and tracks individuals with radio collars.

“We don’t have data that goes back further than 2003, but since then, brown bears have increased at a rate of approximately 1.4 percent per year,” says Mangipane.

When bears congregate in high numbers, even though food is abundant, the bear pecking order is on display. As we stood in the viewing stand, a larger male and a smaller male came within each other’s orbit. There was a female nearby. We watched as the males interacted, with body posturing and vocalizations, before the smaller one backed off.

“There’s a hierarchy among the bears, and they know what it is,” Stoner says.

It was mating season when I visited the camp. The bears were congregating not only to find food, but also to find mates, and I observed many different behaviors. A solo bear might be grazing on some grasses when another bear would approach, often cautiously at first. The bears would size each other up. Sometimes they would sniff one another. Other times, they might lick or wrestle or stand up on their hind legs for a better view. Vocalizations could be heard from time to time. Sometimes they would chase each other around, and other times they would mate.

Researchers continue to study Lake Clark National Park and Preserve’s bears and ecology: analyzing fecal samples to learn about bear gut microbiomes, studying how mercury gets into lake trout, learning about bear pathogens by analyzing blood and serum, and so on. While the bear population is healthy and growing, Mangipane says, climate change could affect food resources and their habitat.

“We are currently undertaking a research project to identify linkages between ocean currents, clams, sedges, salmon, sea otters and bears, while also identifying the ways changes to these will impact the food web,” he says.

Meanwhile, Stoner works to help people find a connection with these animals.

“When I see that twinkle in someone’s eye—for the first time that they’ve seen a brown bear—then that’s what gives me the energy,” she says. “And that makes me know that the bears will live on even when I’m not around.”