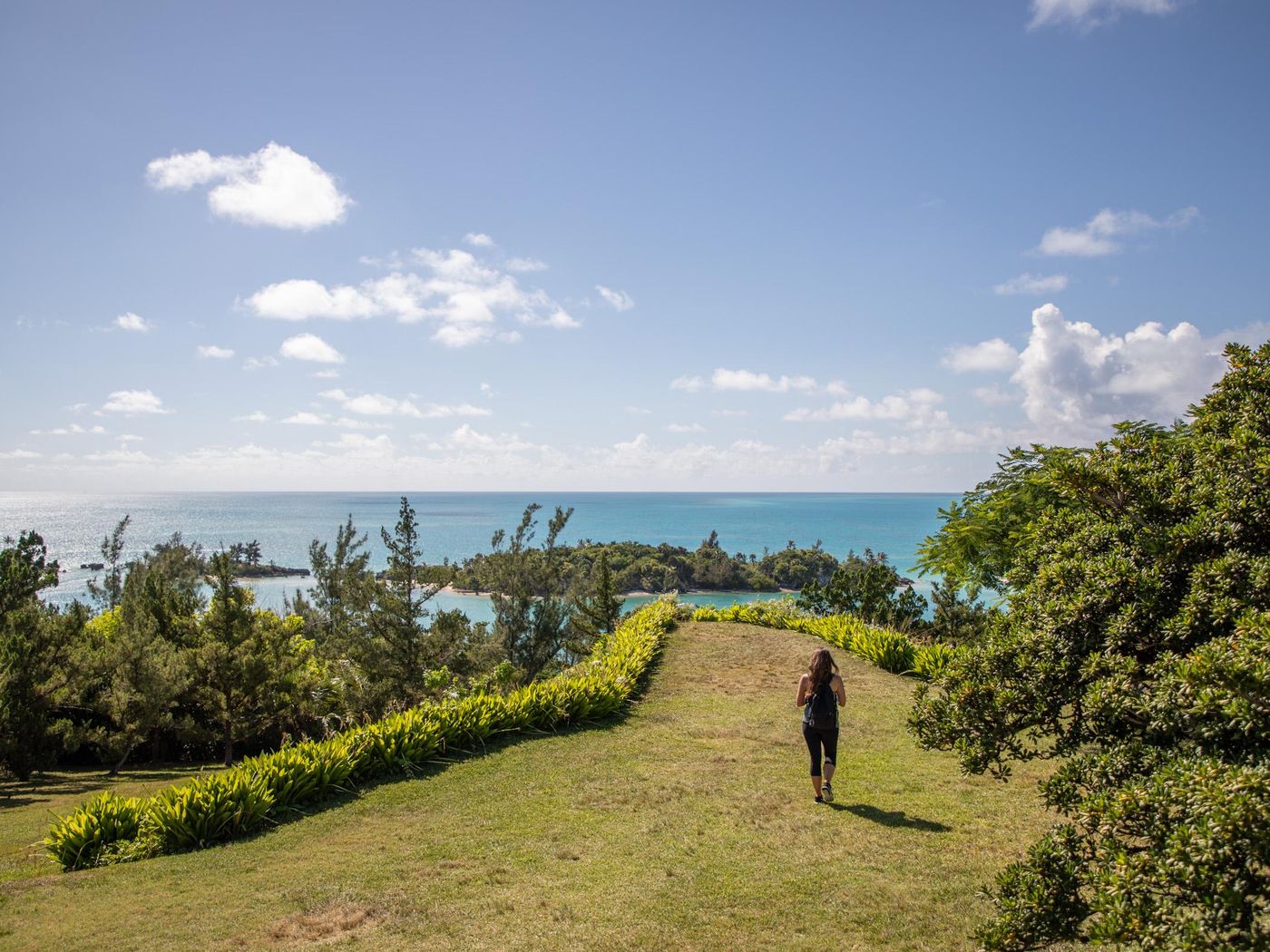 A yellow-bellied kiskadee calls out its piercingly melodic tune kis-kis-kisadee as blooming trees fill the air with notes of jasmine and gardenia. Wind rustles the leaves of shaggy casuarina pines, and elegant white longtail birds dart in and out of craggy rocks from which centuries-old military forts rise. As the sun sets over white buttery roofs, turquoise waters turn deep shades of pink, and tree frogs begin their evening serenade. This is Bermuda in the spring.

Bermudian singer Hubert Smith captured Bermuda's mystique well when he penned “Bermuda Is Another World” (2005), now considered the island's unofficial anthem. Indeed a world of its own, the island—located just 650 miles east of Cape Hatteras, North Carolina—has attracted visitors from the East Coast and beyond for over a century.

Today, Bermuda’s historic rails-to-trails route is one of the best ways to experience Bermuda's otherworldly nature. Built on the tracks of a railway that ran from 1931 through the end of WWII, it winds for 18 miles through the heart of the island. Ranging from paved pathways to hills and bridges, its nine sections are free of motor vehicles and ideal for pedestrians, joggers and cyclists.

Tim Rogers, a passionate Bermudian who leads academic-style walking tours, likens the trail to a charm bracelet, as it provides visitors access to dozens of hidden gems throughout the island. “I think one of the real charms of the Railway Trail is that you can really lose yourself in a good way, getting to see parts of Bermuda that the average visitor is not going to get to see,” he says.

Take a day to explore the full trail, or dive in deeper and discover some of the historic forts, hidden gardens and secluded pocket beaches tucked away along one of these four shorter sections.

North Shore from Devonshire to Flatts

Shortly after entering the trail at Palmetto Road in Devonshire, an imposing vista of Royal Naval Dockyard, site of Bermuda’s largest fort, The Keep, greets you. A center of British military power for over 150 years, the Dockyard served as a key launch point for the Royal Navy to patrol the Atlantic Ocean. It was from this port in the summer of 1814 that more than 5,000 British troops were deployed to lay siege to Washington, D.C. during the War of 1812. To the east, you can see the white sands and vibrant blue-green hues of Shelly Bay, which marks the end of this tranquil, three-mile section running along Bermuda’s North Shore.

When the railway was originally built, sections of Bermuda’s rock had to be removed, and today it’s not uncommon to find fossils and impressions of shells in the cut hillside along this section. Waterside, vestiges of Devonshire’s once robust shipbuilding industry can be spotted. “What you often see sort of standing like a sentinel is the chimney – just the chimney is left where the caulking sheds were for the ships, and occasionally a boat slip going down to the water’s edge,” says Tim. While the days of shipbuilding are long gone, the four bridges along this section are ideal places to watch cruise ships glide into Dockyard or wave to locals out for a sail.

The trail continues to Gibbons Bay, a perfect spot for a refreshing dip. To explore more of the area, continue along North Shore Road to Flatts Village. Stop into the Bermuda Aquarium for an up-close look at some of the many aquatic species that call Bermuda home, including moray eels, barracudas and parrotfish, then stop in for lunch at a favorite neighborhood restaurant like Village Pantry, which serves up healthy fare using local ingredients, or Rustico for Italian fare.

One of the best ways to see all that Bermuda's west end has to offer is to rent a bike from Oleander Cycles in Dockyard and travel two miles along the road to the Railway Trail in Somerset Village. Setting out from Dockyard, you’ll pass historic structures such as a former governor’s home that was later used as a hospital for the Royal Navy and a kitchen where convict-laborers sent from England in the 1830s through 1860s cooked their meals. Crossing Watford Bridge, a view of Somerset’s colorful homes greets you. “There’s every pastel shade up this hillside you could possibly imagine,” says Tim.

Travel along Mangrove Bay, counting the colors at every turn, and enter the trail at the police station. Once on the trail, you vanish into what Tim describes as a "lush, green, verdant forest." Casuarina as well as fiddlewood trees that turn an autumnal gold-copper in the spring provide cover from the sun, no matter the time of year.

Though mostly inland to start, the trail eventually offers sneak previews of the water. At brightly white-washed Heydon Trust Chapel, built in 1616, turn off the trail for a view of the Great Sound, where the America’s Cup took place in June 2017. Just south of the chapel along the trail is Scaur Hill Fort and Park. Somewhat hidden in the hillside, Fort Scaur was built in 1860 as a first line of defense for Royal Naval Dockyard. Leave your bike at the base of the hill and walk up to check out the historic cannons and picture-perfect scenery.

“Still to this day you can go by on the bus, on bike, on foot, by boat, and you would never really realize there was a fort there,” says Tim. “But when you get up to Fort Scaur, even if forts don’t do it for you, the views from the top of this fortress today are just stunning. If you have a map and a good eye, you can look down over the Somerset Bridge. You can look over what used to be the U.S. Naval Operating Base during the Second World War. You can pick out the Gibbs Hill Lighthouse. Again, you’ve got great views over the whole Great Sound area, and you can get a sneak peek from up on the fort of a house that used to be rented in the early 1930s by the artist Georgia O’Keeffe.”

Once you reach Somerset Bridge, the world’s smallest drawbridge, exit the trail and head a short while along the road to Hog Bay Park, an undeveloped 32-acre preserve. Wander along meandering paths to a forest of dead Bermuda cedars, casualties of a disease that ravaged the species in 1950s. Hauntingly beautiful, their bleached wood glows white in the sun. End your bike ride with a dip or snorkel in the bay and keep an eye out for the snouted hog fish after which the bay gets its name. On the way back to Dockyard, consider turning off the trail onto Scotts Hill Road and heading to Baxter's, a family-run kitchen, for a slice of pie.

Hugging the northern coastline of Hamilton Parish, this section of the trail boasts breathtaking views of the ocean. “You have some very shallow waters in this area and so you get the most gorgeous pale blues, almost like a duck-egg blue color to the water,” says Tim. Pick up the trail opposite Crawl Hill gas station and arrive shortly at a bay where fishermen once corralled fish in from deeper waters. Tim likes to pause a while here on his tours. “You get these sort shabby chic little boats inside of this bay. It really sort of gives you an idea of a time gone by.” Today, the water still teems with fish, from two-inch silver minnows that flit through the water to lumbering, multi-colored parrotfish.

Elevated above the water’s edge, the trail follows a series of cuts in the rock and passes over aluminum bridges. Pause to watch boats sail by on the Bailey’s Bay bridge, or stop on one of several benches lining the trail to breathe in the wild fennel and soak up the vistas of St. George’s in the distance. Once you've reached Coney Island, stop by an old lime kiln used to create a waterproof wash for roofs. Continuing east, see the place where, until 1871, horses powered a ferry connecting St. George’s to the mainland via a rope pulley system.

To conclude your adventure, take a dip off one of Coney Island's many pocket beaches, or head off the trail to explore nearby gems of Hamilton Parish. Those looking to explore further can walk along the road to the Crystal Caves, a mesmerizing series of underground caves thought to be over a million years old, or head to Walsingham Nature Reserve, known to locals as Tom Moore’s Jungle, where 19th-century Irish poet Tom Moore wrote poems under a calabash tree. For a sweet treat, head to Bailey’s Ice Cream Parlour, which serves more than 30 flavors of homemade ice cream including rum raisin and Dark 'n Stormy, or stop by the famous Swizzle Inn. Opened in 1932, the Swizzle Inn is Bermuda’s oldest pub and is best known for its Rum Swizzle, a delicious albeit potent cocktail made with Gosling’s rum and fruit juices.

Begin your exploration of the southern end of the island by ascending 185 steps to the top of Gibbs Hill Lighthouse. Built in 1846, it is the world’s oldest remaining cast-iron lighthouse and offers sweeping views of the island. Next, head downhill on the north side of the lighthouse to Queen’s View outlook, where in 1953 Queen Elizabeth II stopped to gaze out over the Great Sound. Take in the vibrant ribbons of green and blue crisscrossing the sound, then walk down a set of steps along a heavily forested footpath dating back to the 1600s until you reach the Railway Trail at Middle Road.

Shaded by of all manner of trees, from casuarina to palm trees and fiddlewoods, the trail passes by 20th-century houses and some of the island’s largest limestone quarries. While no longer active, the quarries offer a glimpse into how the the island's earliest buildings came to be. After several miles, you'll arrive at Warwick Pond, a protected National Trust property. Walk along its wooden boardwalk breathing in the sweet aroma of the surrounding allspice forest and keep an eye out for the birds such as cardinals and white-eyed vireos. Exit the Railway Trail here and head south along the road to Astwood Park on the coast, known for its wedding-worthy views of the South Shore.

From Astwood Park, pick up the sidewalk heading east along South Road to Southlands, one of Bermuda’s oldest estates, and explore what Tim calls “Frances Hodgson Burnett-style secret gardens.” Southlands’ previous owners had a passion for gardening and transformed the small quarries on the property with flora from around the world. Wander winding paths through wild pepper trees and the estate’s enormous Banyan tree grove, the largest on the island, before locating a set of stone pillars marking the entrance to the South Shore beaches.

Stretching for miles and ranging from wide open beaches to secluded coves, the South Shore is the stuff of postcards. “If you miss out on using the railway trail as a vehicle to get to the South Shore beaches it’s almost as if you’ve missed one of the most iconic images of Bermuda,” Tim says. Dig your toes into sugar-fine pink sand and watch waves crash up against boiler reefs located just off shore. If you’re lucky, you may even see a humpback whale or two breach in the distance. 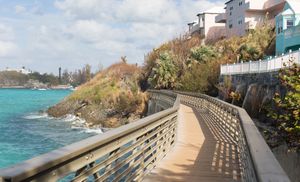