The Best Spots for Seeing Buffalo in Indian Country in Montana 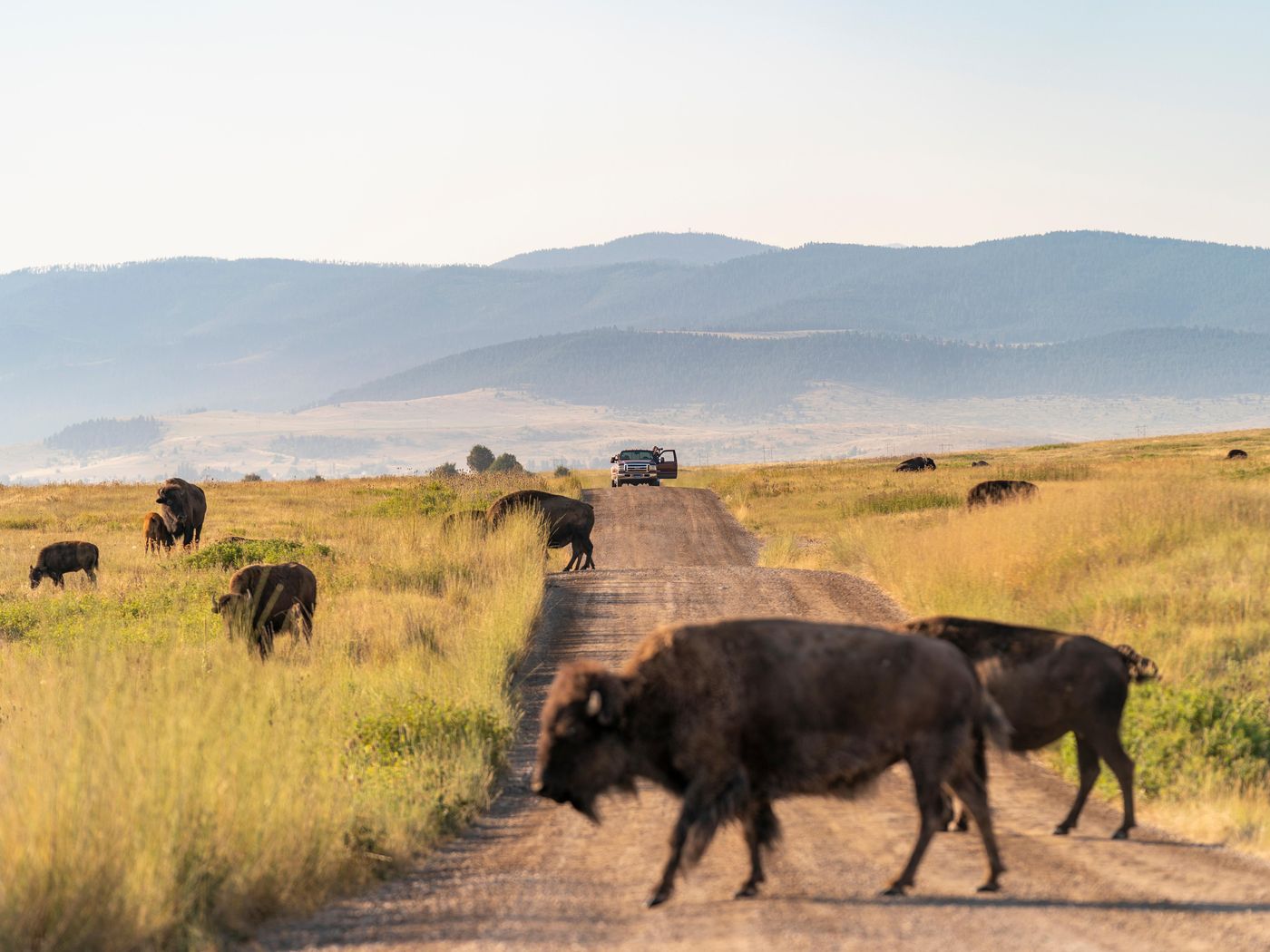 It’s impossible to separate the people of the Fort Peck Indian Reservation from the buffalo that, for centuries, roamed the land. But for more than 100 years, buffalo were absent from this part of Montana—the number went from 30,000,000 buffalo in the mid-18th century to less than 1,000 in the late 20th century.

But in 2012, Fort Peck began the process of bringing buffalo back to this land once more with a program that moved genetically pure buffalo (that means they have the same genetic profile as buffalo who roamed this land historically) from Yellowstone National Park to Fort Peck. Program director Robert Magnan says Fort Peck now has two herds totaling more than 600 animals. Part of Fort Peck’s mission is sharing buffalo from their cultural herd with other organizations, including ones a long way from Montana. “We've already worked with the Bronx Zoo and given them genetically pure buffalo,” he says. “In 2017 we gave them six breeding cows and one bull. That following spring they had 5 calves.”

And while institutions like the Bronx Zoo are working to tell the stories of the Fort Peck people and their relationship to buffalo, Magnan says more and more visitors come to Fort Peck each year to learn about this part of history. In 2019 Fort Peck received a $50,000 grant from the Montana State Parks to put towards the construction of a walking trail where visitors can explore the way buffalo have been part of Nakoda and Dakota culture and history. More recently, the project received a second $50,000 grant from Montana Office of Tourism and Business Development. The trail’s official name will be the Tata’ga Baha Omaskaskan Buffalo Trail, and it will be a four-mile winding path that moves through the land in a way that represents the significance of cycles in Native culture. The path will be dotted with story poles—interactive spots where visitors of all ages can engage with the land, the people and the buffalo.

For the Blackfeet nation, buffalo have historically symbolized the tribe’s relationship with the land itself—buffalo have sustained them, and they in turn have sustained buffalo. As herds dwindled in the late 19th century, it became harder for tribes to partake in traditional ceremonies.

The restored herds present an opportunity not just to teach visitors about history but to once more raise generations of Native people who have hands-on experience living in close proximity to buffalo.

In 2009, the Iinnii Initiative was launched by leaders of the four tribes that make up the Blackfoot Confederacy (Blackfeet Nation, Kainai Nation, Piikani Nation and Siksika Nation) with the goal of working to conserve traditional lands, protect Blackfeet culture and create a home for the historic buffalo of this land. In partnership with organizations like the Wildlife Conservation Society and the inter-tribal Buffalo Council, in 2016 88 buffalo were returned to the Blackfeet Reservation. The tribe is currently fundraising for the construction of a dedicated Iinnii-Buffalo Spirit Center, which will serve as a museum and cultural center. The Blackfeet Heritage Center, in Browning, MT, is the perfect place to learn more about the Blackfeet Nation and the many ways which buffalo interweave with the Blackfeet identity and way of life.

The relationship between buffalo and the Native American tribes throughout Montana is endlessly fascinating—a rich cultural and historical tradition that goes back thousands of years. The restoration of buffalo herds in the Indian Country of Montana offers travelers the opportunity to go outside and experience firsthand the excitement and the significance of seeing these animals roam once more.