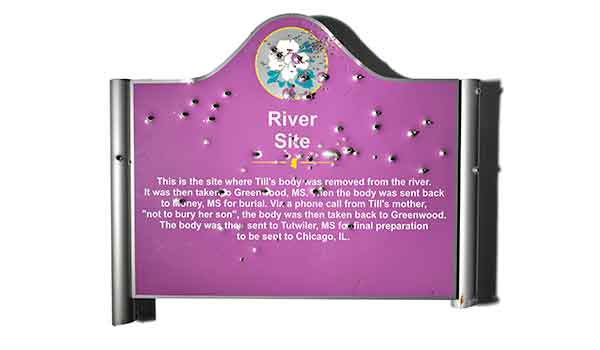 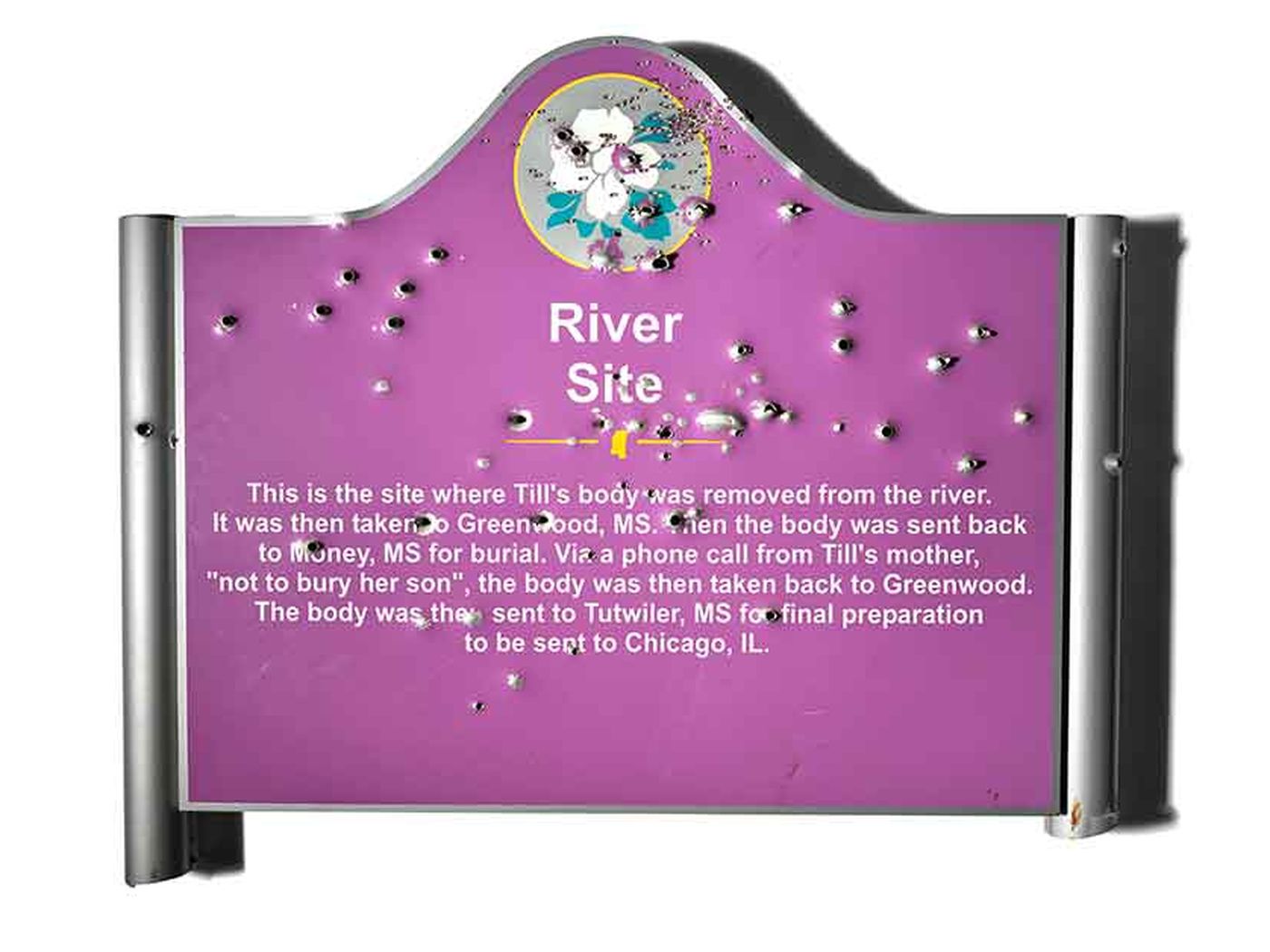 “The history of racial violence is often erased and highly contested in the battle to define American memory," says the museum's director Anthea Hartig, "and this vandalized sign demonstrates the ramifications of ongoing efforts of remembrance and social justice." NMAH

On August 24, 1955, a 14-year-old Black teenage boy named Emmett Till unassumingly walked into a grocery store in Money, Mississippi, to buy some bubble gum. At the time, he didn’t know that this seemingly benign trip would mark him for death.

Carolyn Bryant, the store’s white female cashier, in her recount of the incident, falsely claimed Till "grabbed her and verbally threatened her." Simeon Wright, Till's cousin told Smithsonian magazine in 2009, that upon leaving the store, he and Till "both walked out together, [Bryant] came outside going to her car. As she was going to her car, [Till] did whistle at her."

Bryant’s family sought revenge. So, in the middle of the night on August 28, 1955, Roy Bryant, the cashier’s husband, and J.W. Milam, Bryant’s half-brother kidnapped Till at gunpoint. They took him to a barn, and along with other accomplices, gouged out one of his eyes, tortured and shot him. Later they took Till to the banks of the Tallahatchie River, anchored him to an industrial fan with barbed wire, and threw his lifeless body into the water.

Born in the comparatively progressive city of Chicago, Till was unaccustomed to the virulent racism of the Deep South, so he probably didn’t understand that a simple act—like talking to a white woman—could endanger his life. Decades later, Bryant reportedly admitted that she lied about her recount of the incident, saying that Till had never assaulted her in any manner.

An all-white jury, in just over an hour, acquitted Bryant and Milam. "If we hadn't stopped to drink pop, it wouldn't have taken that long," said one juror, according to historian Stephen Whitfield, author of the 1988 A Death in the Delta: The story of Emmett Till. Both men confessed to the killing in a 1956 Look magazine interview and were paid $3,150 for their story. “I'm still shocked,” said Wright. “I believe sincerely that if they had convicted those men 54 years ago that Emmett's story wouldn't have been in the headlines. We'd have forgotten about it by now.”

At the funeral, Emmett’s mother Mamie Till-Mobley determined that her son’s maimed and broken body would lie for all to view in an open casket. “Let the world see what I’ve seen,” she said with a heartbreaking determination that would galvanize the civil rights movement, where Till's murder would become a reaccuring theme.

In 2007, nearly 50 years after Till's execution, Mississippi’s local Emmett Till Memorial Commission, a community organization run by county board members and activists, determined that the location where Till's body was recovered should be remembered. So, in March 2008, they installed a commemorative plaque near the river at Graball Landing—a former steamboat docking site created by enslaved people in 1840—where Till's body was discovered three days after he was kidnapped. Sadly, the sign didn’t last long: Within months someone stole it, and it was never recovered.

Then, in the fall of 2008, the commission replaced it with another marker, but that, too, was shot at and defaced: By 2016, someone had riddled the second replacement sign with 317 bullet holes. The sign was so badly damaged that “you could barely read any of any of the letters on it,” says Patrick Weems, the executive director of the Emmett Till Interpretive Center, a museum in Sumner, Mississippi. The commission eventually removed the illegible second sign and displayed it at the Emmett Till Interpretive Center.

In 2019, they erected a bulletproof memorial marker—outfitted with 0.5inch AR500 steel and covered with a 0.75-inch acrylic panel. In total, the comission installed four signs at the site, all of which were vandalized. As time went on, the vandals only seemed to become more emboldened, going so far as to photograph themselves posing in front of the defaced monuments.

Now, the Smithsonian’s National Museum of American History is bringing public attention to the second bullet-ridden sign. The month-long exhibition “Reckoning with Remembrance: History, Injustice and the Murder of Emmett Till,” co-curated with the Emmett Till Interpretive Center, will feature the defaced marker at the museum from September 3 through October 5.

“Our institutions need to become more responsible in addressing this past and how it affects the present,” says Nancy Bercaw, from the division of political and military history at the museum and co-curator of the exhibition.

Anthea Hartig, the museum’s director, echoes the sentiment. “The National Museum of American History is deeply honored to collaborate with the Tallahatchie community to preserve and present the legacy of Emmett Till,” Hartig said in a statement. “The history of racial violence is often erased and highly contested in the battle to define American memory, and this vandalized sign demonstrates the ramifications of ongoing efforts of remembrance and social justice. Racism does not only reside in the past; it inhabits our lived reality.”

The show will tell Till’s story in four parts: Curators will provide viewers with the backstory to the murder. They will highlight the community organizing that took place in Tallahatchie, Mississippi, to memorialize Till’s death. Curators will also focus on what does and does not get remembered in the American landscape and how objects become erased from the collective memory. Finally, the exhibition will draw connections from Till’s murder to anti-Black violence today.

The museum will also place Till’s story in a wider context during a panel discussion called “The Long Battle: The Work of Preserving Emmett Till’s History,” which will feature the Rev. Wheeler Parker, Till’s cousin, Tallahatchie community leaders and Till scholar Dave Tell of the University of Kansas. This event will be available on YouTube on September 3.

“What I've come to understand is that the history is getting obliterated,” says Jessie Jaynes-Diming, a board member of the Emmett Till Interpretive Center. “If you don't make these exhibits, if you don't have these museums, […] these stories are not told. And it's all part of history […] it's all part of the structure of making a difference.”

Bringing difficult artifacts to a national museum setting, telling their stories, and speaking truth to these histories, is a delicate act that requires time and research. Co-organizers Bercaw and Tsione Wolde-Michael, the museum's curator of African American social justice worked with the commission and other Mississippi community members to acquire the sign and to learn more about its complex past. The curators traveled to Mississippi to meet with locals, gathering such narratives from community members “to really hear people's stories and to ask them what it would mean if we were to bring this object into the collections,” says Wolde-Michael.

Partnering with locals helped the curators to weave together a comprehensive narrative about Till’s death—and the community work that followed it. “The Mississippi story to them is not just the story of the brutality and the violence,” says Bercaw. “It's also the fact that people have been working over generations to make sure that the landscape is marked with these histories. That takes skilled organizing and this has been generational. The community wanted people across the nation to be aware,” she says. “People often overlook the power of Black collective action in the state and that it's been a critical force since the state was founded.”

After Jet magazine published photographs of Till’s open casket funeral at Roberts Temple Church of God in Chicago, those indelible images became the impetus for the looming civil rights battles to come. When Martin Luther King stepped to podiums across the nation, he would often speak of Till “screaming from the rushing waters in Mississippi.” When the iconic civil rights figure Rosa Parks refused to get up from her seat on a segregated bus, she refused to do so because she was thinking of Till.

The profound impact of the civil rights movement helped to pass legislation like the 1965 Voting Rights Act, which removed many legal barriers that prevented African Americans from exercising their right to vote—rights that today are being challenged. It also paved the way for other social justice movements, like gay rights and the women’s movement.

But as racial tensions currently roil the country, following the 2020 protests sparked by the killing of George Floyd and as activists continue to decry the disproportionate rates at which Black people are incarcerated and the myriad ways that African Americans are discriminated against, the curators see a singular importance to bringing this artifact to light. “At this time exhibiting the sign was so important, because it demonstrates that these histories of racism and violence continue in the present,” says Wolde-Michael. This show, she says, connects “the past and the present and is designed to make conversations about race and racial reckoning more accessible to the general public.”

In 2019, a group of students from the University of Mississippi posed in front of another historical marker put in place to mark Emmett Till's murder. Again, this one was riddled with bullets and the students held guns in their hands. Later, these students were suspended from their fraternity house and faced an investigation from the Department of Justice, but a photograph of the students holding their guns still got hundreds of likes on Instagram.

Then, in November 2019, after the commission installed a new tribute to Till, a group of white supremacists held a rally in front of the new sign.

“Why is it so difficult to honor a 14-year-old child?” asks Weems. “Why, in 2021, is that a difficult task? That seems like it should be a pretty simple proposition, but we've found time and time again, that it is a very contested history.”

The exhibition hopes to place these facts in a single space, so viewers can see that these phenomena aren’t isolated incidents. The marker will be displayed in the museum's central atrium, called Flag Hall, an open town hall center adjacent to the Star-Spangled Banner, the flag that prompted Francis Scott Key to write the poem that became the National Anthem. Curators chose this space because it drives home the point that Black history is American history and that Till’s story is integral to the national narrative.

“The sign lays bare for the nation the ongoing nature of anti-Black violence,” says Wolde-Michael. The sign was shot 317 times. “Each bullet hole re-enacts the violence against Till and is also an act of violence against national memory.”

Though these efforts seem laudable, a question remains: When racism is such a pervasive force in the U.S., how can people find a remedy. A single exhibition might not heal wounds wrought by centuries of violence and hate, but the bullet-riddled memorial marker, however, is testament to the difficult nature of racial reckoning.

“It's incumbent upon the curator, to really connect with a community to find out what the meaning is,” says Bercaw. “The object itself, embodies this, and it's the question of how the curator can make sure that it's displayed in such a way that that meaning is not lost, and that meaning just speaks out to the rest of the public.”

When asked about the role of the sign, Jaynes-Diming also says that the artifact isn’t a panacea to racial ills. Instead, it’s a sort of generational heirloom that bore witness to a place’s history. “Truth will stand no matter what,” she says. “So, when we created the signs and everything, and when we mark the locations with signage, it becomes really personal in telling this story.”

“Reckoning with Remembrance: History, Injustice and the Murder of Emmett Till” will run from September 3 through October 5 at the Smithsonian’s National Museum of American History.