Lonnie Bunch, the founding director of the National Museum of African American History and Culture, has worked at the epicenter of the museum industry for more than 30 years. His 2000 essay, “Flies in the Buttermilk: Museums, Diversity, and the WIll to Change,” addressed a critical lack of diversity in museum staffing. As museum educators and specialists convened in Atlanta this week for the annual meeting of the American Alliance of Museums (AAM), the theme “The Social Value of Museums: Inspiring Change” was made all the more urgent as protests erupted in violence this week in Baltimore after the death of Freddie Gray, mirroring the events that transpired last fall in Ferguson, Missouri, following the death of Michael Brown.

Recently, the National Museum of African American History and Culture hosted the symposium “History, Rebellion, and Reconciliation” which examined protest movements in the United States through social, artistic and spiritual lenses. And Bunch spoke with a passion of the events taking place:

Ferguson, Cleveland, Staten Island, North Charleston, and now Baltimore have been seared into our consciousness. Yet this violence, this loss of innocence and life is not just an issue in urban African American communities—it casts shadows on Native and Latino life; it has sparked a national conversation and a movement that challenges America to confront issues of race and fairness that have haunted this country from its inception. . . .I also know that there have been key movements in our past when events, when tragedies, when injustice has galvanized the nation and the pain has led to profound change. This may be such a momen of possibility; a moment of change.

Bunch spoke with Adrianne Russell about the Baltimore protests, the role of museums during times of upheaval, and the National Museum of African American History and Culture’s plans for the future. Russell co-hosts the #museumsrespondtoferguson Twitter chat on the third Wednesday (1-2PM CST/2-3PM EST) of each month with Aleia Brown.

I’m down in Atlanta at the American Alliance of Museums conference and it’s been really present on everyone’s mind the role of museums in social justice. I did have the pleasure of watching the recent symposium at your museum last Saturday and was just enthralled and inspired by the entire event.

I love the fact that museums are now realizing they have a social aspect to it. To me it’s always been social justice. And so I’m just pleased to see that I’m no longer a voice in the wilderness.

Eyes are starting to open and we’re getting there. At the symposium museums were characterized as safe spaces, even sacred spaces. Do you feel museums should play that role, or is that outside of the mission statement?

I think that my museum, what all museums, need to recognize that they have to ask themselves, how are they of value? How are they of value in the traditional sense; preserving artifacts, making history and culture accessible, inspiring new generations? That’s crucially important. But to me the real question is how does a museum make its community, its region, its country better? And while not every museum has the same answer, it seems to me that museums ought to be, and they are seen as trusted places. So if we're trusted, then we ought to be trusted to be part of the most important conversations that can occur, and that is about fairness, about justice, about making America better.

How can museums achieve the authenticity to enter into those conversations with different communities? There’s been a lot of talk here about museums not practicing what they preach. They have a diversity policy and an inclusion policy where they’re out trying to engage in the community, but their practices aren't reflected internally.

I don’t think you can tell the history or the culture of a community, I don’t care what the community is, without knowing the living community. So I think the best museums recognize that they can’t be community centers, but they can be at the center of their community.

We’ve been talking a lot about language and coded language, and intention, and telling stories, even with objects and exhibitions. How do you feel about the mainstream media’s representation of the unrest in Baltimore?

I think what's really clear is that there’s a lack of knowledge about everything from what does urban unrest mean, to what does it tell you historically about people who burn and destroy in their own neighborhoods, to really the way people are characterized? And so in some ways as I watch the media coverage of Baltimore, Ferguson and other things, I’m amazed at how ahistorical the coverage is.

How people do not understand that in some ways this is part of a long tradition where people who feel devalued find ways to find a voice. And so, and I think the way the media is depicting Baltimore, especially, is as if the choice is either don’t protest, which may lead to violence, or accept the lot. I mean part of the notion of calling people thugs is painting a lot of people with a broad brush and I think that’s a challenging thing to do.

Personally, I'm feeling that lack of representation and being painted with the broad brush. Several African Americans here at the conference have had the distinct displeasure of being mistaken for each other. (Laughs) I’ve had that happen a couple times already.

In some ways that notion is really, again, not new. In the museum profession for many years there was me and Spencer Crew, and then later Rex Ellis. Yeah, I don’t know how many times I’ve been to AAM when they called me Spencer or called me Rex. I don’t look like either of those guys.

Revisiting your article published in 2000, “Flies in the Buttermilk: Museums, Diversity, and the Will to Change” do you feel diversity has increased in museums? Do you feel that that has changed at all since you’ve written that?

I would argue that the issue of diversity in museums is now something that everybody talks about, that everybody claims, but nobody owns. And while there is a much more diverse museum profession than definitely when I started, but definitely when I wrote that article 15 years ago. But the major difference is that the leadership of many cultural institutions, the board composition, the staff composition, and especially in positions that have influence, is still very un-diverse.

And I think that, as I argued in my article, museums have done a brilliant job of wrestling with Nazi loot and looking at all sorts of difficult issues; the role of education in museums, for example, or the role of scholarship. What they did is they made those [issues] key to getting accredited, key to getting funding.

Diversity has never been seen as key to the success of museums. And until it’s tied to issues of accreditation, issues of kind of getting funding from the Pew Charitable Trusts or the Rockefeller, until that happens, it’s not going to happen. On the one hand the greatest accomplishment is that throughout my career, we’ve been able to do the kind of work that I think changes the museum and ultimately changes America. But I worry a great deal about the fact that I’m not going to be doing this 10 years from now and am wondering, "Where are the people who are positioned to take leadership in cultural institutions?" Not that there aren’t people who are diverse in the museums, but in terms of being positioned to take leadership, that’s my big worry.

Do you feel that your museum plays a role in kind of pushing that message forward?

The National Museum of African American History has a lot of roles to play. I think that there is no doubt in my mind that museums look for models and messiahs as they move forward. And I know that some of the work we will do, be it the kind of relationships with communities, be it the kind of commitment to diversity, will also have a ripple effect through the rest of the profession. What I’m proudest of, quite honestly, of this new museum, is that I probably have the most diverse staff in America of any museum.

And it’s important to me that African American history isn’t just owned by African Americans, and so in my staff it’s extremely diverse because what it means is wherever those folks go, they will actually bring with them the beliefs about how to work with community, about how do you use history to make America better, how do you help people grapple with difficult or controversial moments? That’s the kind of legacy and maybe that’s the gift we give to America with this new museum.

It really is, and we’ve had a couple of sessions that would have been considered kind of rogue off-site sessions, where we discussed museum labor practices and…

I like that, I like that. I think the thing you want to keep in mind is never call them rogue sections . . . . Call them rump parliaments. In other words it’s a tradition of taking important issues outside of the legal halls, but using that freedom to change the legal halls. So you keep having those meetings while you’re there in Atlanta, and cause as much trouble as you can. 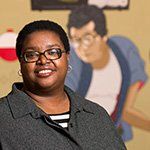 Adrianne Russell is a museum evangelist, literary artist and nonprofit consultant based in Kansas City, Missouri. She has written and presented about the intersections of art, race, gender and culture for Temporary Art Review, The Museum Life with Carol Bossert, Museum Computer Network, and her blog, Cabinet of Curiosities.