Islay (pronounced “eye-la”), an island off the west coast of Scotland that has long been home to a rural population of a few thousand fisherman and farmers, is famed for its distinctive peat-flavored malt whisky and distilleries. This year, however, it will be celebrated for the honor, respect and fortitude its inhabitants displayed toward American servicemen 100 years ago during World War I.

A unique and poignant artifact from the collections of the Smithsonian Institution—an American flag—will travel to the island to mark the occasion and express our nation’s gratitude to its makers.

The story of the flag begins on January 24, 1918, when the SS Tuscania departed Hoboken, New Jersey. The ship, a 14,000-ton Cunard Anchor Line ocean cruiser, had been converted into a U.S. troop carrier. On board the 576-foot long ship were 2,164 American soldiers and 239 crew members, mainly from Scotland, but also from England, Ireland, Norway and other nations. Two were women.

The ship’s final destination was Le Havre, France, with a major stop in Liverpool, England. Eight months earlier, the U.S. Congress, heeding President Woodrow Wilson’s call to arms, had declared war on Germany, but the large mobilization of troops to fight in the “great war” was still weeks away. These young Americans were among the first to be sent abroad.

Tuscania had made several previous trips across the Atlantic to support the war effort. Aboard this time were troops recruited mostly from the Great Lakes region and the Pacific Northwest, serving in the D, E and F Companies of the 6th Battalion of the 20th Engineers; members of the 32nd Division; and the 100th, the 158th and 213th Aero Squadrons.

Tuscania stopped in Halifax, Canada to join a convoy of 14 American ships before crossing the Atlantic. Off the coast of Ireland, the convoy was met by eight British Navy destroyers, which then began their escort en route to Liverpool.

On the evening of February 5, Tuscania was seven miles southwest of Islay when it was struck squarely mid-ship on the starboard side by a 2,000-pound torpedo launched by the German submarine UB-77. The explosion engulfed the boiler room and echoed throughout the Tuscania. Flames shot up some 200 feet in the air according to one account, and literally shifted the entire ship along the surface of the water according to another. With a massive hole torn through its hull, the ship began to list.

By all accounts, the troops calmly donned their life belts, and preparing to abandon ship, they launched some two dozen lifeboats and rafts. But the equipment was damaged, and many of the lifeboats immediately capsized, throwing soldiers into the high, icy sea.

Death for most would have been certain but for the heroic actions of the British destroyers. Mosquito came adjacent on the port side with 200 men jumping aboard. Then, Grasshopper pulled aboard from the freezing waters another 500 or so. And finally Pigeon came starboard, and the crew cast ropes across to Tuscania for 800 or so soldiers and crew to traverse.

In the darkness and high seas, several other lifeboats and rafts drifted away toward the Mull of Oa, the rugged, southern shore of Islay, where 600-foot cliffs and offshore jagged rocks and boulders created especially treacherous breakers. Remarkably, some 132 survivors were rescued on or near Islay, with local villagers wading into the waves and pulling the injured to the island’s safety.

Despite the heroism, more than 200 died. Of these, villagers retrieved 183 battered and disfigured bodies on Islay’s rocky shores. Islay’s inhabitants experienced what one termed a “shudder of horror,” and joined in a massive effort to shelter, feed, clothe and nurse the survivors, largely at Port Ellen. But they also had to face a much more gruesome task.

The island’s residents had to prepare each of the deceased for burial. They turned the public hall into a temporary mortuary. They tenderly treated each body and kept track of personal effects, distinguishing military tags, bodily marks and tattoos. These features were recorded in the pages of the notebooks of police sergeant Malcolm MacNeill so that later relatives back in America could identify and recover the remains of their loved ones. MacNeill would later correspond with many of those relatives from across the United States. Islanders had to rapidly prepare land at Killeyan and Kilnaughton for makeshift cemeteries; estate owner Hugh Morrison of Islay House provided another burial ground at Port Charlotte, as well as the timber for constructing coffins. Other islanders prepared shrouds for the deceased.

Islay’s populace, still mourning the deaths of more than 100 of its own men killed in war, felt deeply the tragic toll upon the U.S. soldiers who had come to help the Allied cause. The islanders resolved to bury the American dead with honor. For them this meant interring them under an American flag. But there was no such flag on the island. So, before the funerals began, they made a decision to fabricate one. Using the encyclopedia as their guide, a group of four Islay women (Jessie McLellan, Mary Cunningham, Catherine McGregor, and Mary Armour) and one man (John McDougall) worked through the night at Hugh Morrison’s Islay House, gathering cloth, roughly cutting out 96 five-pointed stars (48 for each side) plus seven red and six white bars, and respectfully stitching together a rectangular Stars and Stripes 67 inches long by 37 inches wide.

The next day, a rainy February 8, American survivors serving as pallbearers carried the first group of deceased soldiers to a burial ground in a funeral procession of several hundred islanders, led by traditional bagpipers and accompanied by two flags, the British Union Jack and the handmade Stars and Stripes.

Reverend Slater performed the funeral service, the flags were lowered and a volley of rounds fired. The deceased soldiers were buried in numbered graves with white wooden crosses at their heads. Funerals took place at four different cemeteries in the days that followed. During the sunny February 11 funeral, attendees sang “God Save the King” and “The Star-Spangled Banner.”

Several months later, Hugh Morrison gave the American flag to a visiting Associated Press reporter appropriately named Frank America, and asked him to give the flag to President Woodrow Wilson, with the request that it be placed in a museum or institution of the president’s choice as an enduring symbol of the respect paid the fallen soldiers. The flag arrived at the New York office of the Associated Press in May and was then sent by parcel post to the White House.

The president offered the flag to the Smithsonian Institution; and the flag was placed on exhibition in the Arts and Industries Building. Smithsonian Secretary Charles Doolittle Wolcott, who was then deeply involved in research efforts for the war, was moved by the acquisition and wrote back to Morrison.

The many thousands of people who visit the Museum each year will view this flag with hearts full of gratitude and will ever cherish the memory of the fact that it was through the sympathetic thoughtfulness of your countrymen that there floated over our men in the last act of their supreme sacrifice that flag for which they had given their all.

The next month, in a rare occurrence approved by Wolcott, the flag was taken to Memorial Continental Hall, blocks from the White House, displayed, held aloft and photographed for a meeting of the Daughters of the American Revolution. Its story inspired the DAR to commission an American flag to send to the women of Islay in recognition of their service.

After the war, the Red Cross erected a monument on Islay to the soldiers of Tuscania and another ship called Otranto, which sank in a collision later in 1918. While six of the bodies of crew members remain on Islay, all of the American bodies save one were eventually exhumed and returned for burial in the U.S., many at Arlington Cemetery.

The flag was moved to the relatively new National Museum building, now known as the National Museum of Natural History, and put on display for at least a decade. One of the flag makers’ daughters came to the museum in 1927 and photographed it for her mother who was living at Islay House. At some point, the Islay flag was removed from exhibit and put in storage.

This past summer, Jenni Minto from the Museum of Islay Life visited the Smithsonian, and made arrangements with the National Museum of American History’s curator of military history, Jennifer Jones, to view the Islay flag.

It was then that Minto advanced an idea—what if the flag could travel back to Islay Island for the 100th anniversary of the tragedy? The flag would then, the Smithsonian agreed, pay homage to a great service and honor the heroism of the modest and unassuming women and men of Islay who sought to bury with respect the fallen American soldiers.

The Smithsonian has readied the flag for its trip to Islay and its five-month long display at the Museum of Islay Life, which also houses the notebooks documenting the deceased and Tuscania’s ship’s bell. Museum trustee Les Wilson has authored a new book about Islay and the war, The Drowned and the Saved, How War Came the Hebrides. Islanders held a memorial service on the February 5 anniversary of the sinking, laying wreaths under a Union Jack and a 2018 reproduction of the historic Stars and Stripes made by the Islay Quilters. The U.S., U.K. and Scottish governments are hosting and sponsoring a number of events marking World War I and the alliance between these nations, culminating with an international service of remembrance scheduled for May 4 on Islay. The Islay flag and its poignant homecoming will help to tell the story of the deep, visceral ties between these nations and their peoples.

Islay's American flag, hand-sewn on a sorrowful night a century ago and preserved by the Smithsonian for the past century, serves today as a potent reminder of the goodness that can be found in the hearts of ordinary human beings, and inspires them to do extraordinary things in the face of adversity. 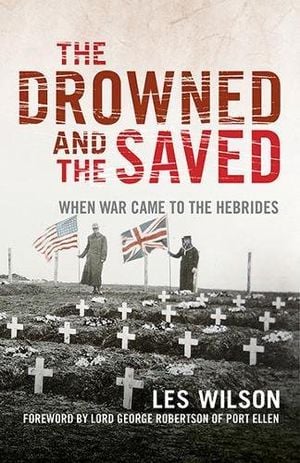 The Drowned and the Saved: When War Came to the Hebrides

The sinking of the troopship Tuscania by a German U-Boat on 5 February 1918 was the first major loss of US troops in in the war. Eight months after the people of Islay had buried more than 200 Tuscania dead, the armed merchant cruiser Otranto collided with another troopship during a terrible storm. Les Wilson tells the story of these terrible events, painting a vivid picture which also pays tribute to the astonishing bravery of the islanders, who risked their lives pulling men from the sea, caring for survivors and burying the dead.
See: