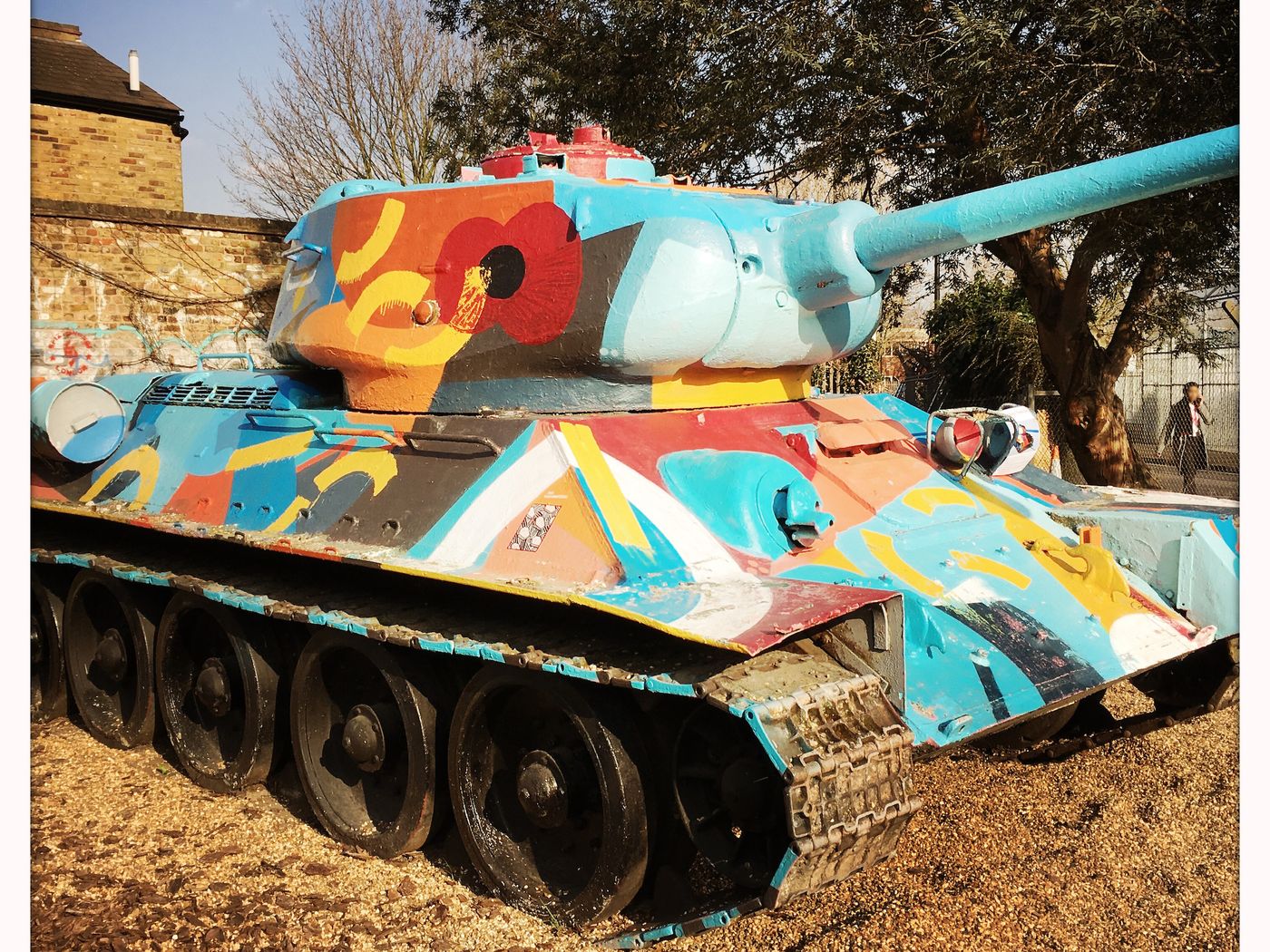 At the world's largest arms fair held every two years in London, a group of artists in 2016 organized the "Art the Arms Fair," to voice opposition to the war industry and the international arms trade (above: Pattern Tank by Tristan Oliver, 2019). Courtesy of Tristan Oliver

The universal desire for peace, summed up famously by John Lennon’s “give peace a chance,” represents not only a desire to mitigate violence, but to live safely in a sustainable world upholding the values enshrined in the U.S. Consitution, “life, liberty and the pursuit of happiness.”

“Much of the debate on peace is muddied by misperceptions about both the nature of violence and how to create peace,” writes Steve Killelea, the founder of the Institute for Economics and Peace in his 2021 book Peace in the Age of Chaos. “This is partly because most politicians do not understand peace. They do understand aggressive responses to threats that are popular with their citizens and often confuse these with peace.”

With a 2022 defense budget projected to be $810 billion, the United States outspends the combined efforts of China, India, Russia, the United Kingdom, Saudia Arabia, Germany, France, Japan and South Korea on national defense. But what if the U.S. could divert even a small percentage of global military spending for building peace? 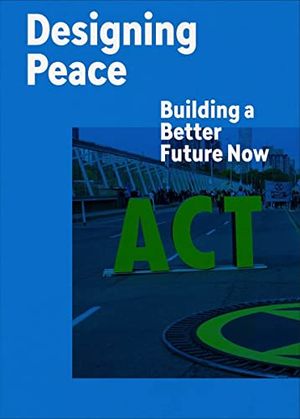 Designing Peace flips the conversation: peace is not simply a passive state signifying the absence of war, it is a dynamic concept that requires effort, expertise and multidimensional solutions to address its complexity.

The architecture of peace

The United Nations in its Agenda for Sustainable Development outlines a plan for fostering peacefulness. Besides reducing violence, human trafficking and corruption, the UN targets the elimination of poverty and hunger, building infrastructure for more resilient cities, improving health and education, taking action on climate change and supporting innovation. Much of this is considered in a new exhibition, “Designing Peace,” on view at the Cooper Hewitt, Smithsonian Design Museum in New York City through September 4, 2023.

Cynthia E. Smith, the museum’s curator of socially responsible design, spent five years researching how design can encourage peace. Trained in industrial design with a graduate degree from the Kennedy School of Government at Harvard, Smith has led several multidisciplinary design projects over the years for the United Nations, the NEA (National Education Association) and, since 2005, Cooper Hewitt.

“As America’s design museum, Cooper Hewitt can advance public understanding that design can be a force for good,” she says. For this show, Smith selected 40 design proposals, initiatives and interventions from 25 countries that include objects, models, installations, maps, images, textiles, video games and film. The exhibition is divided into sections, each addressing a different question about what it means to design for peace.

How, for example, can design support human peace and security? In Colombia in 2010, after the country had experienced decades of internal conflict, the Ministry of Defense hired an ad agency to persuade the rebel soldiers of the FARC (Revolutionary Armed Forces of Colombia) to lay down their arms. They executed this with charm and humanity. Knowing that demobilizations spiked at during the holidays, the team began its “Operation Christmas” project.

To entice insurgents, they lit forest trees in ten rebel-held zones with thousands of blue lights and with motion-activated sensors, banners were illuminated that read, “Demobilize. At Christmas, everything is possible.” In waterways, they launched the “Rivers of Light” project deploying nearly 7,000 glowing orbs upstream of the rebel bases, each one filled with personal homecoming messages written by local citizens and friends of the families of the fighters. The three-year campaign not only encouraged demobilization, but helped the public to embrace the returning guerrilla soldiers as family members.

A very different example comes from Tunisia, the largest exporter of terrorist fighters in the world. In an effort to address self-radicalization, in 2017 a peace-building team named Search for Common Ground-Tunisia conducted interviews with youths in five Tunisian communities to learn what factors were driving kids to become mercenaries.

This led to ten graphic novels by a comic collective called Lab 619, each with dialog in Tunisian dialect, to address the concerns of unemployed and disaffected youth who are most vulnerable to extremist overtures and foreign recruitment, including an unemployed young man, a female student/sexual-assault survivor, an employed single woman and a withdrawn computer nerd. The graphic novels present alternatives to violence. Partner groups organized community discussions for young people on the themes raised in the books.

Peace building at the border

A floor-to-ceiling wall made of vertical steel slats, intercepted by hot pink see-saws, dominates the section that asks: “How can design support safe, healthy, respectful environments?” In 2019, designers Ronald Rael and Virginia San Fratello of Oakland, California, got together with a Mexican collaborator, Colectivo Chopeke, to create on the U.S.-Mexico border the “Teeter-Totter Wall.” The prefabricated pink beams were inserted between the vertical slats in the border wall near Ciudad Juarez, Mexico.

Then, the team equipped the horizontal pink beams with bike seats and handlebars. Children were positioned on both sides of the wall and immediately started to ride the see-saws.

For a brief moment, Smith writes in the excellent show catalog, “Two communities long separated by an imposing steel wall came together to play on oversize teeter-totters spanning the US-Mexico border.”

She continues: “The wall’s role as an emblematic fulcrum for US-Mexico relations—whether human relations, politics or economics—was made literal: actions taken on one side directly impacted those on the other side. In the process, the site was transformed into a space of hope and joy.”

The digital game, “Papers, Please,” lets visitors play the role of a border agent tasked with catching spies, smugglers and immigrants without papers. The agent decides who enters the country, who gets arrested and who gets turned away. Designed by Lucas Pope in 2013, it is a purposely simple game, with stark graphics and loud synthesized horns and drums. The goal is to have players navigate the moral dilemmas the job entails and—in the process—find empathy.

How design engages with creative confrontation is powerfully demonstrated by the bold visual protest against police killings in the Black Lives Matter Harlem Street Mural from 2020, done in collaboration with the City of New York.

This section also includes a novel protest: an anti-arms-trafficking event. The United Kingdom hosts one of the world’s largest arms fairs—the biennial Defense and Security Equipment International. In 2016, an all-volunteer London group organized a parallel two-week event called Art the Arms Fair. Artists from many disciplines (including established talents like the Guerrilla Girls and Anish Kapoor) organized exhibitions, lectures and workshops as well as staged music and comedy events. A 2019 Tristan Oliver photograph depicts a decommissioned tank festooned in DayGlo patterns. The fair raises funds for a partnering group, Campaign Against Arms Trade. The goal is to encourage ordinary citizens to question their complicity in the marketing of implements of war.

Perhaps the most striking object in the show is a rug made by weaving together thousands of used bullet casings, a work of the Spanish art collective DETEXT. Founding member Raúl Martínez has been collecting the casings since 2013 from across the globe, including Colombia, Guatemala, Lebanon, Mexico and the United States. In the U.S. alone, he has sourced 50,000 bullet casings to make seven rugs, one of which incorporates .40 caliber bullet casings, the caliber police prefer, and the one responsible for the death of Michael Brown in Ferguson, Missouri.

As Caroline O’Connell, a curatorial assistant at Cooper Hewitt, writes in the catalog: “The bullet was designed by and for US law enforcement agencies for enhanced ‘stopping power’—the power to kill faster and more efficiently—a chilling fact Martinez hopes his work will prompt viewers to consider.”

Perhaps the most useful invention in the show is a mobile phone app called RefAid (Refugee Aid App) that was created in 2016 by an ex-pat American tech entrepreneur named Shelley Taylor.

The app allows migrants to identify nearby services by locating them on a map. The information is available in English, French, Spanish, Arabic and Farsi (so far) and works in much of Europe, the Middle East, South America, Africa and the U.S. (It can also be used offline.)

It is also valuable for aid organization like Doctors without Borders, the International Rescue Committee and the British Red Cross. “They can communicate with app users—who may remain anonymous—through geotargeted push notifications to a specific neighborhood or city, alerting migrants in the region, for example, that a medical unit will be arriving the next day,” Smith writes. “Aggregating information into one easily accessible central repository, the app had radically transformed communication with migrants on the move and instigated a sector-wide shift to digitization.”

This and so many other clever, useful and vital creations in this exhibition prove that, yes, you can design for peace.