Lewis won this year’s Best Reality-Based Work award at Comic-Con International in San Diego, reports Cavna—an honor bestowed upon him by his peers in a competition that has been compared to the Academy Awards.

March: Book 2, for which Lewis won the award, is part of a trilogy made in collaboration by the Georgia Representative, his co-writer Andrew Aydin and artist Nate Powell. The story shares Lewis’ own lifelong struggle for civil rights from childhood to the present day, going back to his roots in rural Alabama to his efforts to gain voting rights in the segregated South during the 1960s. 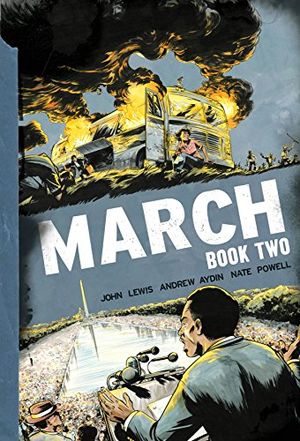 Graphic novels may seem like an odd medium for a man best known as a bastion of the Civil Rights Movement. Lewis chaired the Student Nonviolent Coordinating Committee (SNCC) and was instrumental in organizing the 1963 March on Washington. As the March’s youngest speaker, he gave voice to young people around the country who demanded an end to segregation and racial discrimination. “To those who have said ‘be patient and wait,’” he declared, “we have long said that we cannot be patient. We do not want our freedom gradually, we want to be free now!”

His insistence on speaking out has proved a hallmark of Lewis’ long career in politics—and it has translated easily to 21st-century readers eager for his take on political change. As Visual Arts Journal’s Greg Herbowy reports, March is now on public school curriculums in 29 states and became a No. 1 New York Times best-seller.

Lewis tells Herbowy that he developed an appreciation for art as a student at Fisk University and that the art he discovered there, particularly that of African-American painter and graphic artist Aaron Douglas, “gave us hope to dream for a better day and a better world.”

It's a legacy that the leader, who marched through the Comic-Con exhibit hall on July 23 to promote his book complete with a backpack and trench coat like he wore in Selma, is doing his best to continue. The march may long be over, but Lewis treks on—and thanks to March, his story has new legs.