NASA’s Helicopter Ingenuity Will Attempt the First Flight on Mars

If the craft succeeds, it will provide crucial information for exploring the other planets by air 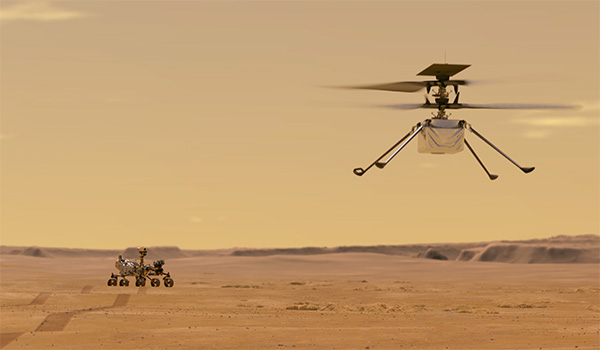 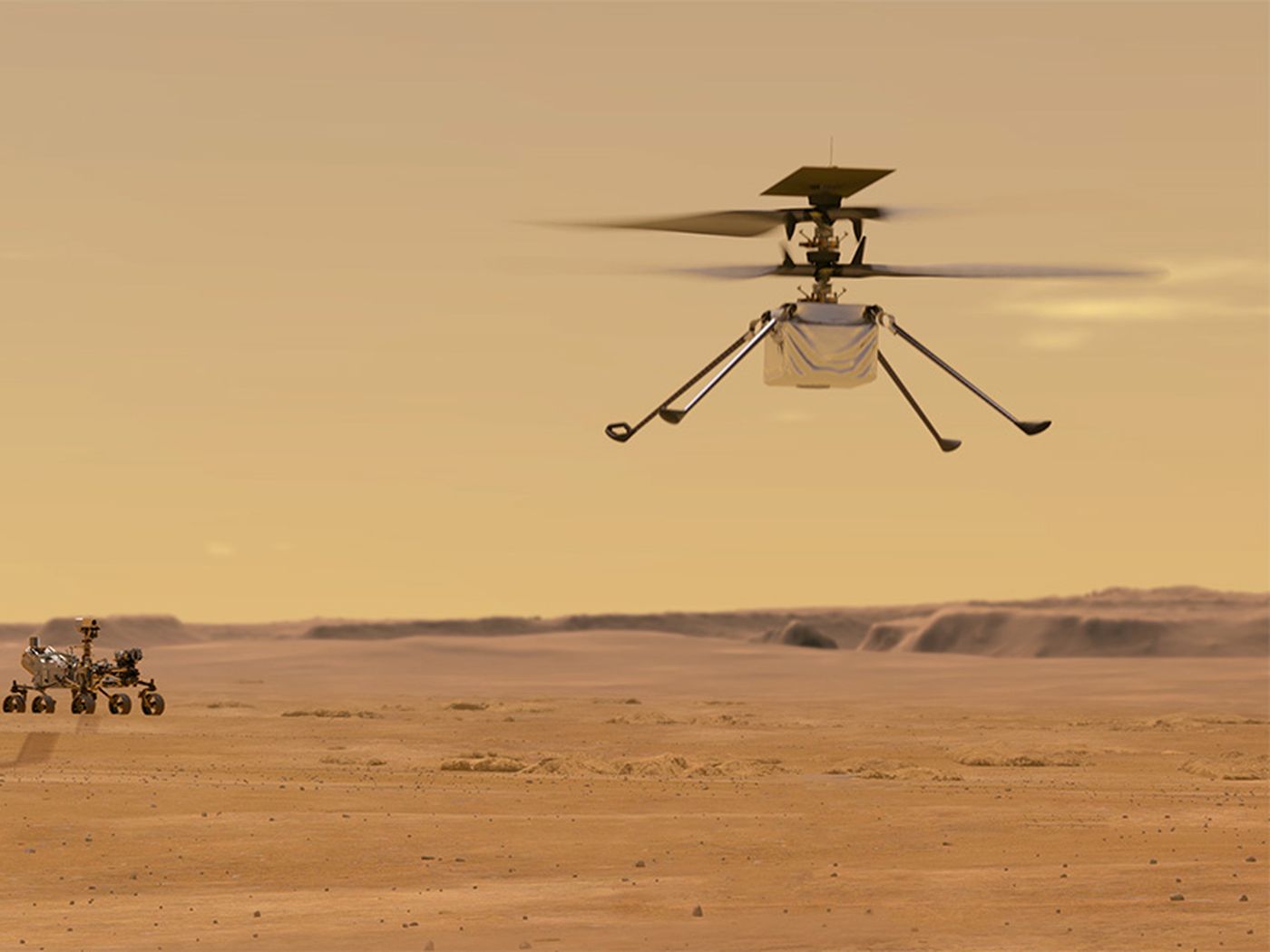 Ingenuity undertakes its first test flight on Mars in this illustration. NASA / JPL-Caltech

It’s been nearly 120 years since the Wright Brothers proved that controlled, powered flight was possible on Earth. Now, NASA is set to prove that it can happen on another planet.

Ingenuity, a four-pound helicopter, will attempt the first ever flight in another planet’s atmosphere when it reaches Mars. The pint-sized helicopter is currently strapped to the underside of NASA’s Perseverance rover, which is rocketing towards the Red Planet with an expected arrival date of February 18.

The helicopter is what’s known as a technology demonstration, which means that successfully showing its capabilities in a series of test flights is its only mission. If all goes well, Ingenuity will usher in a new era of exploration of Mars’ rugged terrain—going where rovers can’t and giving some of the planet’s treacherous features, such as its huge lava tubes, a closer inspection.

If the Wright Brothers comparison seems overwrought, consider the following: no helicopter has ever flown higher than around 40,000 feet on our planet. But on Mars the air is just one percent the density of Earth’s—so thin that flying there is the equivalent of trying to take off at 100,000 feet.

“You can’t just scale a helicopter designed to fly on Earth and expect it to work on Mars,” says MiMi Aung, the project’s manager at NASA’s Jet Propulsion Laboratory (JPL).

To generate enough lift, Aung and a team of engineers led by JPL’s Bob Balaram had to redesign traditional rotorcraft down to the very shape and material of the rotor blades, while also dramatically cranking up how fast those blades spin. The final product sports two stacked rotors featuring blades roughly four feet in diameter that spin in opposite directions at 2,400 revolutions per minute.

But generating enough lift wasn’t the team’s only concern. To create a helicopter that could fly on Mars the team faced a variety of challenges, from making the vehicle almost completely autonomous to trimming the craft down to an ultralight weight.

Though Martian gravity is only around a third of what we experience on Earth, reducing Ingenuity’s weight was a constant obsession for those on the project, says Aung. No matter what, the helicopter had to weigh four pounds or less. What became the governing law of the project emerged from the need to fit Ingenuity underneath the Perseverance rover, which capped the width of Ingenuity’s rotors at four feet and in turn restricted lift.

“Everything we did to make it incredibly lightweight was countered by the need to make it strong enough to withstand launch and the trip to Mars,” says Balaram. “It’s an aircraft that also needed to be a bona fide spacecraft.” 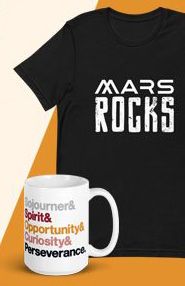 Aung recalls a full-blown argument breaking out between the normally mild-mannered Balaram and members of the telecommunications team who made the mistake of requesting an extra three grams (around 0.1 ounces) for their equipment. “He made it clear they needed to figure it out without the extra three grams,” recalls Aung.

Another big challenge the JPL team faced was making Ingenuity almost totally autonomous, because it takes a minimum of five minutes for signals to reach Mars. Designers also needed to make the helicopter would not endanger Perseverance’s $2.5 billion mission. That required safety innovations like only charging batteries to full power just before flights to ensure Ingenuity’s lithium ion batteries had no opportunities to overcharge and explode like the smartphones of yore.

Balaram first had the idea that would become the backbone of Ingenuity’s design in the 1990s. He and some colleagues proposed the idea of a Mars helicopter to NASA in the early 2000s and got a year of funding to work on it, but ultimately the money dried up and the idea was shelved.

More than a decade later, Aung says then director of JPL, Charles Elachi, saw a talk that inspired him to return JPL with a blunt question for his team: Why aren’t we flying on Mars? Somebody in the room remembered Balaram’s work and the ball started rolling again. After a fresh round of promising tests, JPL added Aung as the project’s manager in 2014.

As the project moved farther along, a new challenge forced the team to innovate in another dimension: testing. Nobody had ever tried to fly on Mars before, and so the team had to come up with ways of trying to replicate its thin air, lower gravity and even a bit of its weather

In December 2014, the team sucked almost all the air out of a vacuum chamber at JPL until it matched the density of Mars’ atmosphere. Then they spun up the blades of their prototype. The craft lifted off the ground, demonstrating for the first time that it was possible to fly in air that thin. But the joystick-controlled helicopter bobbled and bounced off the ground like a baby bird leaving the nest for the first time before crashing onto its side, sending pieces of its blades flying. The lift was there but the control was not.

In the analysis of that test, Balaram and the team realized they needed to alter the prototype’s blades. On Earth, spinning helicopter blades start to flap up and down at speed, but the air is thick enough to dampen the flapping before it gets out of hand. In the simulated Martian air however, that flapping ran amok and destabilized the young helicopter. To solve the problem the team ended up making the blades out of super-stiff carbon fiber, which is also, crucially, very light.

After tackling controlled flight, the team needed to address near-total autonomy. Havard Grip, an engineer who led the project’s guidance, navigation and control team, needed to develop the right combination of sensors and algorithms to enable the helicopter to keep itself stable and on-target. In May 2016, the next big test saw the nascent Ingenuity lift off the ground and hover steadily, but the helicopter was still tethered to a power source and a computer behind the scenes by a dangling tail of wires. Over the next two years, the team packed all the parts needed to fly on Mars—solar panels, batteries, communications and processors—into a sub-four-pound package that could essentially fly itself.

That final test of the fully loaded prototype came in January 2018. Engineers crafted a flight environment even more similar to Mars. They hung a fishing line that tugged the prototype gently upwards to simulate the Red Planet’s reduced gravity and suffused the flight chamber with carbon dioxide to more closely mimic the composition of Martian air. The helicopter took off, hovered and performed a measured side to side maneuver, looking every bit like an idea that had matured into something real.

Finally, it was time for the team to assemble the real Ingenuity. That final, nerve-wracking build took place inside a clean room with meticulously sterilized equipment and parts to make sure the helicopter tagging along on a mission aimed at searching for ancient signs of life on Mars wouldn’t bring any biological contaminants with it. Now, Ingenuity is strapped to Perseverance’s undercarriage as the whole mission hurtles through space towards Mars.

On February 18, when the helicopter arrives on the Red Planet it will contend with a dry, cold environment where nighttime temperatures can plummet to -130 degrees Fahrenheit. After a few weeks of ensuring everything is working as expected, Perseverance will motor off to some suitably flat ground to drop off Ingenuity. After depositing the helicopter in the rust-colored soil, Perseverance will drive about a football field away.

Over the course of the following 30 days, Ingenuity plans to attempt up to five increasingly ambitious flights. The historic first flight on another world will be a simple hover.

“The very idea that the first flight has to work under conditions you’ve never experienced is amazing,” says Nick Roy, a researcher at the Massachusetts Institute of Technology who specializes in autonomous robots. “You can do all the testing and analysis you want but at the end of the day you’re taking off and flying in conditions we never fly in on Earth.”

If all goes well, the test flights will culminate with a 500-foot traverse of the Martian terrain. Though Ingenuity has no science objectives, it has a pair of cameras that have the potential to deliver images of the Red Planet from an entirely new perspective.

Those images may provide glimpses of how future helicopters may transform NASA’s capabilities on Mars and even other planets. “If this effort is successful it opens up a whole new method by which we can survey the Martian surface,” says Dave Lavery, the program executive for Ingenuity at NASA headquarters. “You want to know what’s over that next hill.”

Erik Conway, a historian at JPL whose job it is to catalog its triumphs and tribulations, says simply covering more ground more quickly on Mars will do wonders for our exploration of its surface. “We’ve landed less than ten things on all of Mars,” he says. “If you tried to convince me that you knew everything there was to know about Earth by landing in ten spots, I’d laugh at you.”

Balaram says future iterations of Mars helicopters could tip the scales at up to 50 pounds, including around eight pounds of scientific instruments, and might shift to become hexacopters like some drone designs already flying here on Earth.

If Ingenuity succeeds and achieves controlled flight on Mars, Lavery says it “breaks open the dam. If we can do it on Mars...we can probably do it in other places as well.” NASA already has a similar mission called Dragonfly in the pipeline that plans to fly a nuclear-powered rotorcraft on Saturn’s moon Titan where the air is thicker.

But, all these possibilities hinge on the word “if.”

“That first flight on Mars will be the ultimate, ultimate test,” says Aung. “Nobody knew if this was possible, and now we need one more flight to prove it is.”