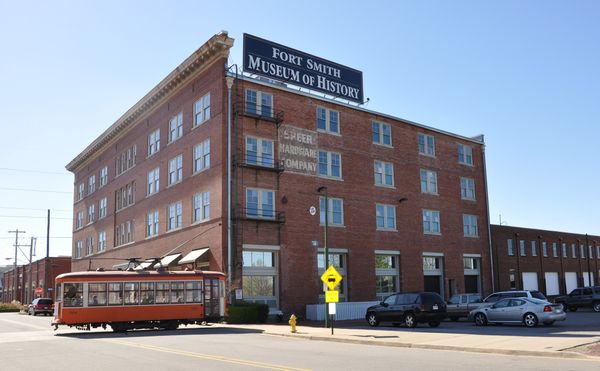 The mission of the Fort Smith Museum of History is to collect, preserve and share the history and culture of Fort Smith and the surrounding region. Our regional area is Sebastian, Crawford, and Franklin counties in Arkansas and Sequoyah and Leflore counties in Oklahoma.

The museum was established in 1910 as the Old Commissary Museum with the purpose of saving the city’s oldest building from demolition, the 1830s Commissary building to the second Fort Smith. For decades, what is now the Fort Smith Museum of History, was housed in the old Commissary building; that building is now part of the Fort Smith National Historic Site. In the late 1970s, the FSMH moved to the Atkinson-Williams Hardware Warehouse. Over the span of more than a century, The Fort Smith Museum of History's collection has grown to approximately 50,000 artifacts chronicling the city's and surrounding region's history. We strive to care, share, and preserve the collection, as well as the Atkinson-Williams Warehouse--our largest artifact, which houses the museum. Constructed in 1906 for Atkinson-Williams Hardware, the building is one of the only remaining warehouse structures from the downtown warehouse district of that era. Williams Hardware and later, Speer Hardware, occupied the structure through the late 1960s. The Fort Smith Museum of History, a 501 c 3 non-profit institution, has occupied the warehouse since 1979 when the building was listed on the National Register of Historic Places. It's founding in 1910 makes the FSMH the oldest continually operating museum in the state of Arkansas.

Our exhibits illustrate the contributions, impact, and progress of the cultural, political, and economic development of the area. Long term exhibits include a highlighted timeline that carries visitors through the growth and development of the city that grew out from the 1817 military fort. Our exhibitions feature the story of William O. Darby, founder and commander of Darby’s Rangers, a collection of vintage vehicles that includes the 1911 J.J. Little, Fort Smith's first fire engine, and an 1857 Napoleon Cannon used by the Union forces during the Civil War. Other exhibitions include a revised display of the 1998 exhibition In the Shadow of the Gallows, which includes original furnishings from the court of Judge Isaac C. Parker; On the Air, an exhibit featuring the history of radio and television broadcast in Fort Smith and the region, beginning in 1922; an impressive collection of 19th century woodworking tools; and a depiction of the well-known Goldman Hotel in downtown Fort Smith. The Boyd Gallery offers temporary exhibitions utilizing the museum’s vast artifact collection, traveling exhibitions, and exhibit space for community organizations and institutions. A treat from our 1920s-1940s era old fashioned soda fountain is an experience unto itself. Savor a handmade ice cream sundae, float, or ice cream soda served in a working exhibit.