Harvard professor David Keith has an interesting theory for how to slow global warming. He wants to spray sulfur dioxide particles into the stratosphere to create a reflective barrier that would deflect radiation and lower global temperature. A couple of planes flying 20 kilometers above the Earth once a year could spray a fine layer of sulfuric acid, enough to reflect back 1 percent of the sun’s rays.

His plan is bold, and certainly not a silver bullet. It’s politically loaded, hard to test and comes with unknown risks. But Keith, who will be speaking this Saturday at Smithsonian magazine’s “The Future is Here” festival in Washington, D.C., claims the technique would be cheap, easy, and, in conjunction with cutting carbon emissions, keep Earth’s temperatures at a reasonable level.

The concept of geoengineering isn’t new. The term was first used in 1965 in a President’s Science Advisory Committee report to President Lyndon Johnson titled "Restoring the Quality of Our Environment." Since then, proposed geoengineering projects have ranged from “artificial trees” sucking carbon from the air to covering the glaciers of Greenland with reflective blankets. By the National Academy of Sciences definition, geoengineering is, “A broad term for deliberate, large-scale manipulations of Earth’s environment that have been proposed as methods to potentially offset some of the consequences of climate change.”

There are risks associated with solar geoengineering, and a lot of them are unknown, because the process hasn’t been tested aside from computer modeling. Opponents worry about what increased levels of sulfur dioxide, which can be toxic in high concentrations, would do to the ozone layer and to public health. There are also concerns that, if we were to start spraying sulfur dioxide, we would never be able to stop, and that mitigating a glut of one gas with another one could disturb the climate even more. This biggest issue is that no one can accurately predict what’s going to happen. Al Gore didn’t mince words when he told the UN Climate Panel, in 2014, that geoengineering was “insane, utterly mad and delusional in the extreme."

But we also don’t fully understand the risks of increased carbon dioxide in the atmosphere. Keith, a professor of physics and public policy at Harvard, believes his far-fetched approach may actually be a realistic option for addressing those risks. If solely cutting emissions was Plan A, solar geoengineering, he believes, could be one part of Plan B. It wouldn’t eliminate the need to cut carbon emissions, or a lot of the issues associated with them, like ocean acidification, but he claims it would slow some of the harmful effects of warming, such as increased rainfall and more extreme weather events.

“People say it’s a bad idea whose time has come,” Keith says. “It gets you some play in the system you can’t just get by cutting emissions. We could get to preindustrial climate in two long human life times.” 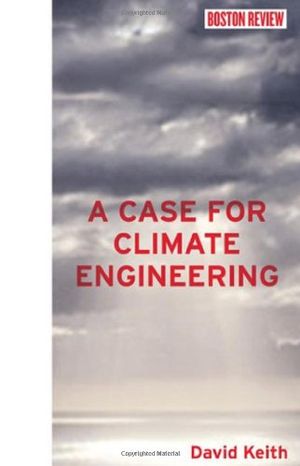 A leading scientist long concerned about climate change, Keith offers no naïve proposal for an easy fix to what is perhaps the most challenging question of our time; climate engineering is no silver bullet. But he argues that after decades during which very little progress has been made in reducing carbon emissions we must put this technology on the table and consider it responsibly.

Keith’s inspiration, and proof of concept, was a volcanic eruption in 1991. Mount Pinatubo in the Philippines exploded, sending a layer of sulfuric acid into the atmosphere. It reduced the global temperature by 0.5 Celsius for two years.

Keith wants to put 1 million tons of sulfur dioxide into the atmosphere a year, which is an eighth of what was emitted by the Pinatubo explosion, and a small margin of the 50 million tons that are released by burning fossil fuels worldwide each year. He thinks that amount will allow us to get the planet back to pre-industrial temperatures over then next several decades. He says the question isn’t necessarily can it be done. The effort, he estimates, would only take a fleet of two or three modified commercial airplanes and cost about $1 billion, and it would start working immediately. The question, rather, is should it be done.

The challenge to creating a sulfur blanket of this magnitude is that it is basically impossible to test on a small scale. The logistics of getting from testing to deployment are also socially, morally and politically complicated. Climate models, from the Intergovernmental Panel on Climate Change on down, show evidence that it will work. But Keith says, “There’s been such a concern in the community about overstating it that there’s a big gap between papers and press releases.”

Starting an experiment in atmospheric change could be a slippery slope. “What concerns people is the political and social consequences of the research going ahead, followed by bigger and bigger experiments,” UCLA law professor Edward Parson, who has published widely on the subject, told Technology Review. “You need to encourage small-scale research, but you need some kind of limited governance to mitigate the risk of a slide to deployment.”

There’s nothing like that in place. Since the technology is cheap enough, small at-risk nations could deploy it, and if every country wanting to slow warming shot sulfur into the air without communicating, it could create significant cooling.

“The big fear is that one country will want it one way and one the other, like two frat boys arguing over the thermostat,” Keith explained, in 2013, on The Colbert Report.

Two years ago, Keith proposed his idea in the book, A Case for Climate Engineering. He also contributed to Our World and Us: How Our Environment and Our Societies Will Change, published this year. In a chapter, he writes, “Critics are right to be wary of the potential risks of SRM [solar radiation management], but are deeply cavalier to dismiss it outright, given the scale of the problem of climate change.”

Keith is now focusing on the practical side: building models to run experiments, and coming up with designs for particles that might have a lower risk than sulfur dioxide. He says the first step to making his solar geoengineering scheme globally viable would be to establish a concerted U.S. research program, to have a place to start an international discussion.

The professor worries that we won’t make good decisions if we’re in panic mode, and stresses the importance of looking at options now. “We only have one world,” Keith says. “There’s no question that there are risks, but we don’t know the climate’s response to carbon dioxide either. It’s a risk-to-risk choice.”

Smithsonian magazine's third annual "The Future is Here" festival begins today in Washington, D.C. During this multi-day event at the Smithsonian museums and the Ronald Reagan Building and International Trade Center, world-renowned experts will give exciting presentations on the future of your brain, body, lifestyle and planet. Check out this list of speakers and program.

Heather Hansman is a Seattle-based freelancer who writes about science, the environment, tech and people, and how they all interact. Her work has appeared in Outside, Popular Science and Grist.